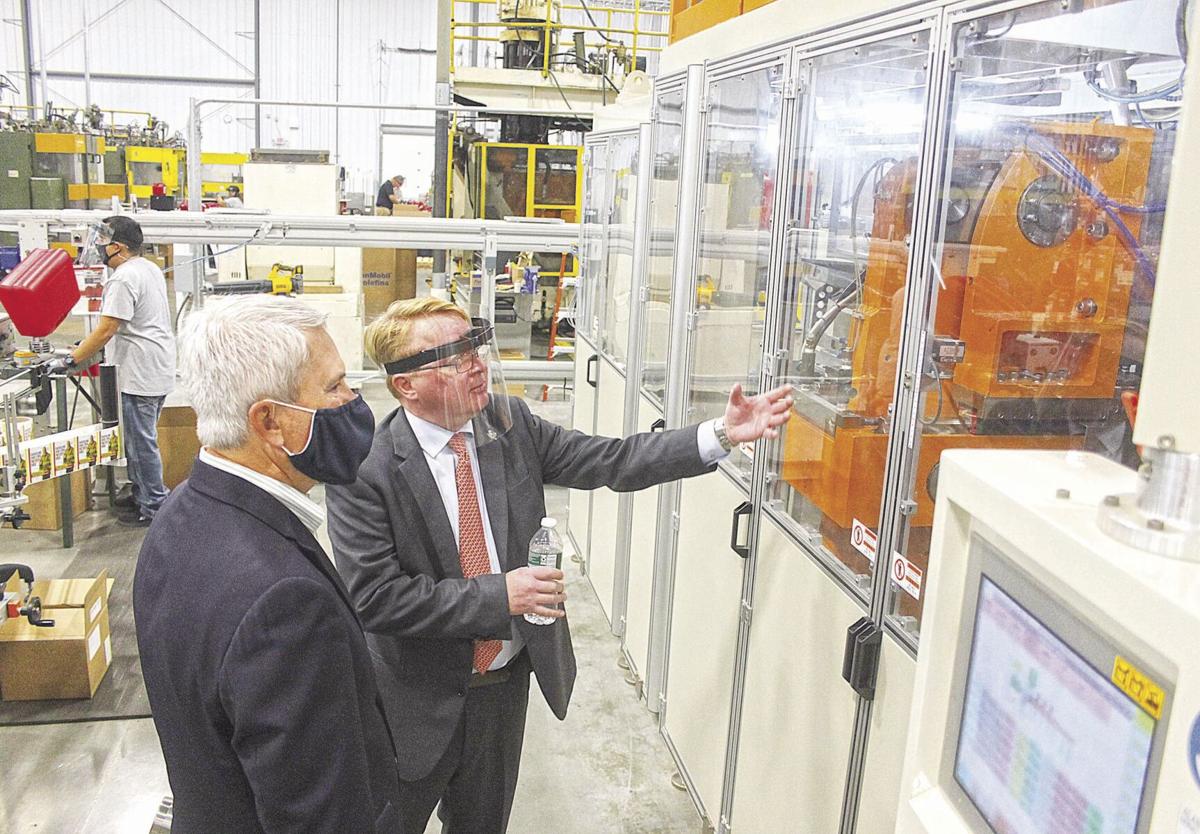 TPG Plastics Co-Founder Pavel Smyshlyaev, right, shows Kentucky 1st District Congressman James Comer the molding machine that is used to shape plastic into gas cans at the company's Murray facility during a tour Comer and other officials made in late October. 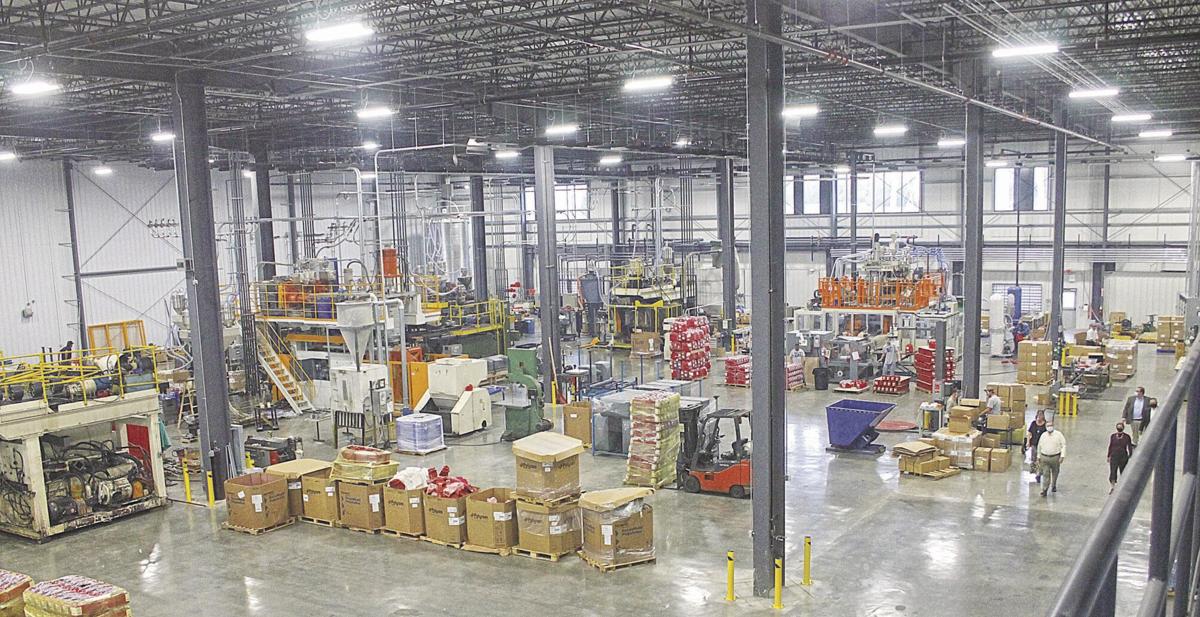 The TPG Plastics facility in the Murray West Industrial Park has been operational since July, but is having such heavy production that expansion is already being discussed. 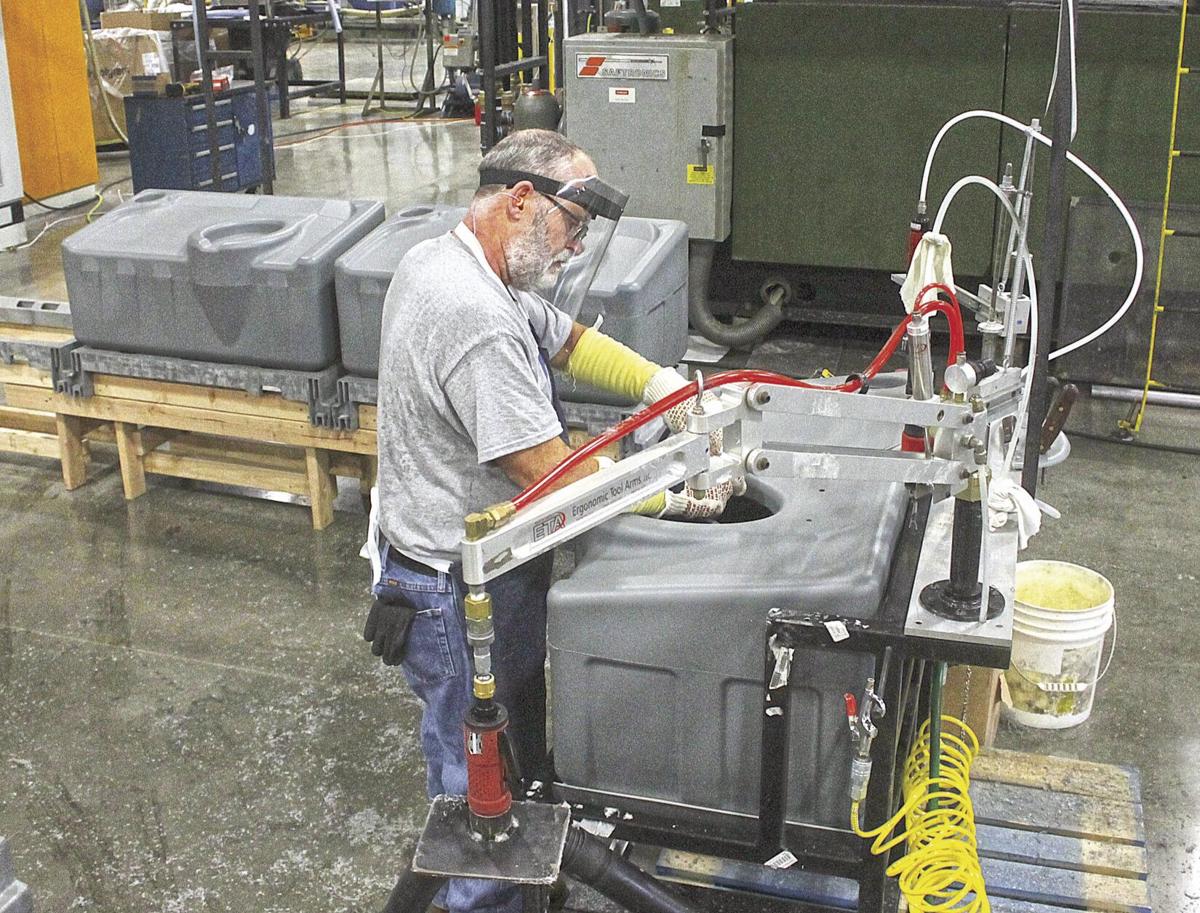 A worker uses machinery to create one of the portable toilets TPG Plastics manufactures at its facility inside the Murray West Industrial Park.

TPG Plastics Co-Founder Pavel Smyshlyaev, right, shows Kentucky 1st District Congressman James Comer the molding machine that is used to shape plastic into gas cans at the company's Murray facility during a tour Comer and other officials made in late October.

The TPG Plastics facility in the Murray West Industrial Park has been operational since July, but is having such heavy production that expansion is already being discussed.

A worker uses machinery to create one of the portable toilets TPG Plastics manufactures at its facility inside the Murray West Industrial Park.

MURRAY — The spec building that was completed in late 2018 in the Murray West Industrial Park has functioned exactly as Mark Manning and the Murray-Calloway County Economic Development Corporation planned.

First, it served as a recruiting tool, presenting a hard-to-ignore presence atop a hill overlooking traffic on U.S. 641 North near the northernmost reaches of the Murray city limits. Eventually, Chicago-based TPG Plastics took the bait, committing itself to doing what the EDC had set as Goal 2 — to someday house an actual industrial facility that could bring jobs to the community.

And after making that commitment in December 2019, and with some help from construction personnel, TPG is not only operating, but since officially starting operations in late July, it already is in need of more room.

“Right now, we have 45 people and, with the amount of equipment we have, it’s getting pretty tight in here,” said TPG Co-Founder Pavel Smyshlyaev during a tour that was attended by state, federal and local officials of the Murray facility in late October.

“And we have more equipment coming in, but we are making more product and it’s rather voluminous. So we’ve just signed a contract to expand the building.”

The main products created at TPG are plastic gas cans, something Smyshlyaev said have become quite popular during this year’s COVID-19 pandemic. He also said sales of TPG gas cans have risen in recent years because of the number of hurricanes that have struck the United States mainland. Just in 2020 alone, the U.S. has been struck by six hurricanes, as well as six other tropical systems, each of which causes power outages, as well as fuel shortages, hence the need for gas cans.

“(TPG retailers) sell more of these during hurricanes than any time,” Smyshlyaev said during the tour that included Manning, the EDC’s president, Calloway County Judge-Executive Kenny Imes and Kentucky 1st District Congressman James Comer. “The only thing people can do in those situations is outdoor work. We’re also selling very heavily all throughout COVID. For some reason, (governments) decided that schools weren’t safe and it wasn’t safe to go to church, but Lowe’s and Walmart were.

“So you also can’t go to the movie theater or do other forms of entertainment, so what do you do? You’re going to work out in the yard and you’re gong to need a gas can for some of that work.”

As he entered the facility with the afternoon’s other guests, Manning reminisced on how the facility used to have a much different appearance.

“Five months ago, none of this was here,” he said as the group moved into the main office area, the same place where he and Smyshlyaev had welcomed about 200 guests to announce that TPG would become the sought-after tenant of the spec building about a year earlier.

“None of these offices had anything in them. Basically, what we’re walking on (newly-carpeted floors) - they were gravel floors. And now, in five months, they’re up and running.”

Along with gas cans, TPG is also manufacturing a variety of other plastic products, much of which surround the automotive industry or coincide with small engines, such as the ones that used to be produced in mega-quantities at the Murray Briggs & Stratton plant before it closed after a 35-year run on the east side of the city’s downtown area.

Not surprisingly, Smyshlyaev said much of the workforce established in the former spec building are former Briggs & Stratton workers.

“I don’t want to say that it was an ‘opportunity’ we took advantage of because what we were really trying to do was to do our part to help the community,” he said, knowing his company could not provide jobs to every Briggs & Stratton worker who lost their jobs. The Murray Briggs & Stratton plant employed more than 600 workers when word came in August 2019 that the plant would close by the middle of this year.

“We also knew that those were really good workers, so we knew they could help us.”

“I’m so glad (TPG) decided to come here and invest in these people,” said Comer, who, at the time, was in western Kentucky campaigning for his race in the November general election, which the Republican won handily. “I’m also happy to hear that they’re to expand already and I think the sky is the limit for these guys and I want to do everything I can to work with them and help them in the future.”

This has also meant quite an adjustment for several members of the TPG brass, who have moved from the Chicago area to Murray and Calloway County. However, it appears the new scenery suits them pretty well so far.

“I love it. There’s good people here,” said Vice President of Operations Bryan Wingfield. “I had never been down here before, not until this venture started anyway, and we’ve had great hospitality, the people have been nice. We’ve just been dealing with good people.

“With most of the workers having come from Briggs & Stratton, we also had the pick of the litter. We got down here just as Briggs & Stratton was closing, so we had good people ready to come and work.”

Along with their mainstay — gas cans — TPG is also manufacturing portable toilets. During the pandemic, it also has been mass producing personal protective equipment, namely face shields, of which it has already produced several hundred thousand. TPG has also been working with Murray-Calloway County Hospital to produce what is billed as an intubation box that is designed to give medical workers extra protection when they are having to establish an air way for patients who may or may not be COVID-19 positive.