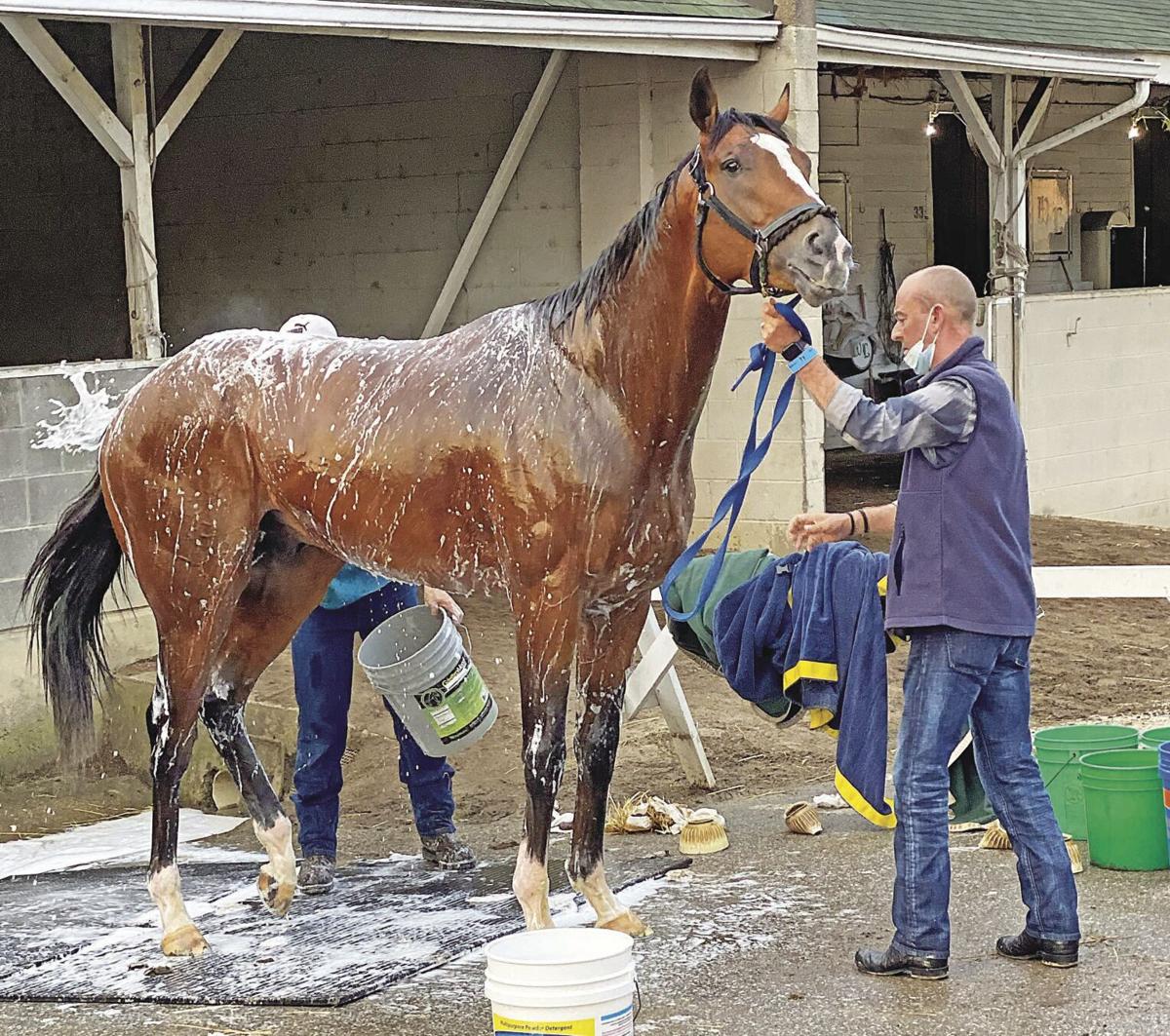 Groomsmen give Kentucky Derby winner Authentic a post-workout bath Monday at Churchill Downs in Louisville. The horse has been installed as the favorite for Saturday's running of the Preakness Stakes in Baltimore. Authentic is partly-owned by Murray State University alum Jack Wolf. 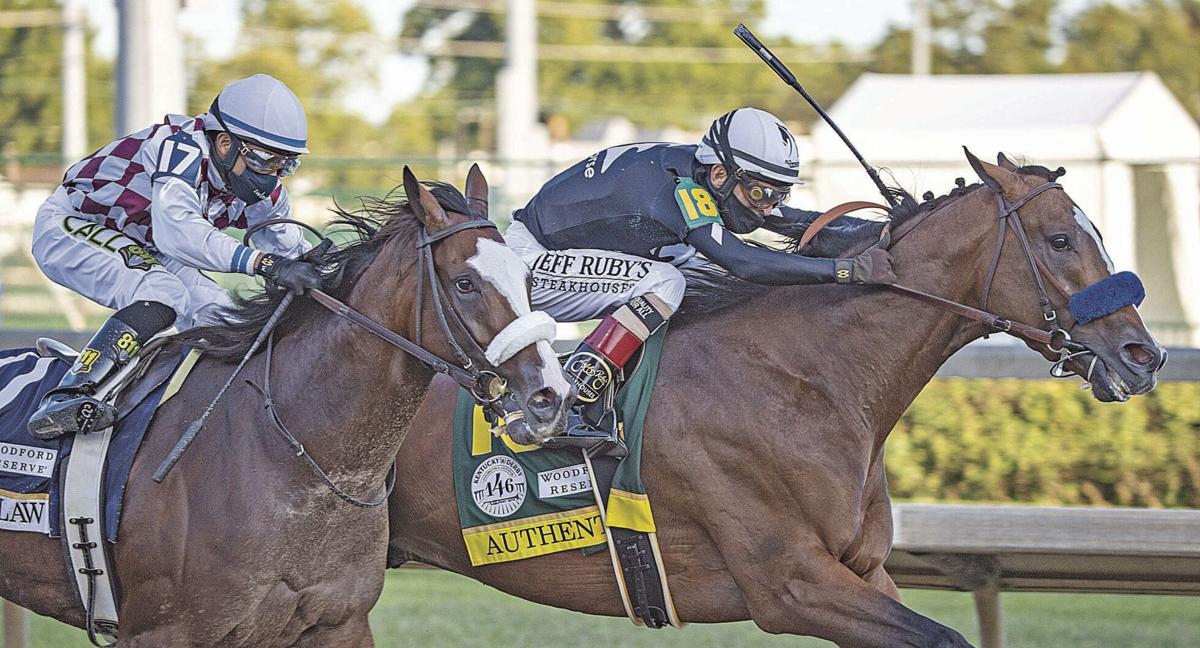 Authentic and jockey John Velazquez approach the finish line ahead of favorite Tiz the Law in the Kentucky Derby in early September at Churchill Downs in Louisville. Authentic, partly-owned by Murray State University alum Jack Wolf and Starlight Racing of Louisville, will seek to win his second race of the Triple Crown series this year Saturday when he competes in the Preakness Stakes in Baltimore.

Groomsmen give Kentucky Derby winner Authentic a post-workout bath Monday at Churchill Downs in Louisville. The horse has been installed as the favorite for Saturday's running of the Preakness Stakes in Baltimore. Authentic is partly-owned by Murray State University alum Jack Wolf.

Authentic and jockey John Velazquez approach the finish line ahead of favorite Tiz the Law in the Kentucky Derby in early September at Churchill Downs in Louisville. Authentic, partly-owned by Murray State University alum Jack Wolf and Starlight Racing of Louisville, will seek to win his second race of the Triple Crown series this year Saturday when he competes in the Preakness Stakes in Baltimore.

That was the title of a 1970s hit by rocker Meat Loaf. By about 5 Saturday afternoon Murray time, Murray State University alum Jack Wolf is hoping they represent his world, as part-owner of the winner of two jewels of horse racing’s Triple Crown series for 2020.

That is what Wolf has on the line this weekend as Authentic, surprise winner of the Kentucky Derby a few weeks ago in Wolf’s hometown of Louisville, looks to add the Preakness Stakes in Baltimore to the vast collection of victories the colt has accumulated. Authentic, who entered his 3-year-old racing year carrying the colors of Wolf’s Starlight Racing Stable before the majority of his racing interests were sold, has only lost once in six starts.

“Hopefully, we can get another one, right?” said Wolf Wednesday, the same day Authentic arrived at Pimlico to begin final preparations for Saturday’s race. As of Thursday, Authentic was the betting line favorite with odds of 9-5. “I saw him on Monday (during a workout at Churchill Downs, where he won the Derby the first Saturday in September) and he’s actually doing great. We went out and watched him breeze on the track and he went 4 furlongs in 47 3/5 seconds and he wasn’t tired.”

Wolf also said he is not bothered by Wednesday’s post position draw. Authentic will start out of the ninth gate in a race that will feature 11 horses, which could be a positive in that Pimlico’s tight turns seem to cater more for outside starters. In the Derby, Authentic started from the outer-most gate, 18th.

That seemed to be problematic in the early stages of the Derby as Authentic seemed to repeat the behavior he exhibited during his only loss, where he finished second in the Santa Anita Derby in California. On that occasion, he started outside and kept his nose aimed toward the outside, which seemed to tire the bay colt. At Louisville, though, jockey John Velazquez was able to gain control of the horse just before the first turn and guided him near the rail, where he stayed the remainder of the race.

Authentic eventually outlasted heavy favorite Tiz the Law, who won the 1 1/8th-mile Belmont Stakes in New York, in a dramatic stretch run of the 1 1/4-mile race at Churchill. The Preakness is shorter, at 1 1/16th miles.

“John is a much stronger rider than we had going into Santa Anita, so that worked out fine,” Wolf said. “We pulled nine out of 11 this time and he’s got three horses who will be out to the side of him, all of which are kind of long shots that don’t look like they have too much speed, so he won’t have too much pressure (which was not the case in the Derby). Going around the first turn, I look for him to be on the lead or stalking the lead.

“This (race) seems to favor speed historically (as opposed to horses who make late runs), so I think he’ll do OK with this.”

Tiz the Law is skipping the Preakness, perhaps to rest for the November Breeders Cup in Lexington.

Authentic seems quite similar to the horse who brought Wolf his first Triple Crown as an owner two years ago, Justify, who also had the same ownership setup as Authentic. Wolf and Starlight were part of a multi-owner syndicate for Justify in 2018 when he won all three jewels — Derby, Preakness and Belmont — and became the first horse to win that since American Pharaoh in 2015.

Pharaoh, like Justify, was trained by Hall of Famer Bob Baffert, who Wolf said more than exhibited that distinction because of how he handled Authentic before the Derby, giving him seven weeks off after the loss at Santa Anita.

Wolf also said that Baffert did something very rare Wednesday. He actually traveled with Authentic from Louisville to Baltimore, something Wolf said had not happened in about 20 years.

“He’s been doing more of that kind of stuff since the Derby,” he said of how Baffert has been handling tasks normally reserved for his assistants. “His key assistant (Jimmy Barnes), of course, is out with a broken arm (the result of an accident with another horse a few minutes before the Derby started) and he’s got other people missing in action right now. But Bob’s fine. He’s in good shape and I saw a video from (Wednesday) where he was walking our horse around after they arrived at Pimlico.”

Wolf said Baffert has also been tending to other business in California for much of the time since the Derby, so Authentic has been left in the hands of one of Baffert’s closest friends back in Louisville. That friend is another Hall of Fame trainer, D. Wayne Lukas, who has 14 Triple Crown race wins to his credit and has a barn at Churchill.

“I’ve known Wayne for something like 20 years,” Wolf said, adding that Monday’s workout at Churchill came on Lukas’ 85th birthday. “He was out watching horses breeze and stuff. Heck! He was still riding one of his stallions around and he looked great, just great. He’s still also a very sharp guy.

“Someone interviewed him earlier this week about our horse and he said, ‘Well, he’s the best horse I’ve had in my barn in about 20 years.’ He’s also told me that the horse has done everything right since he’s had him. He said he does everything he asks him, then comes back to the barn, lies down and goes to sleep. That’s what it takes.”

Saturday’s race can be seen on NBC. Coverage begins at 3:30 p.m. with post time for the race set for about 4:40. With a win, Authentic would become the 24th horse to win both the Derby and the Preakness and the 53rd to win two legs of the Crown in the same year.