Emergency personnel stand beside a car Friday morning on KY 121 South near the Cherry Corner community of Calloway County. The driver of the car died at the scene. 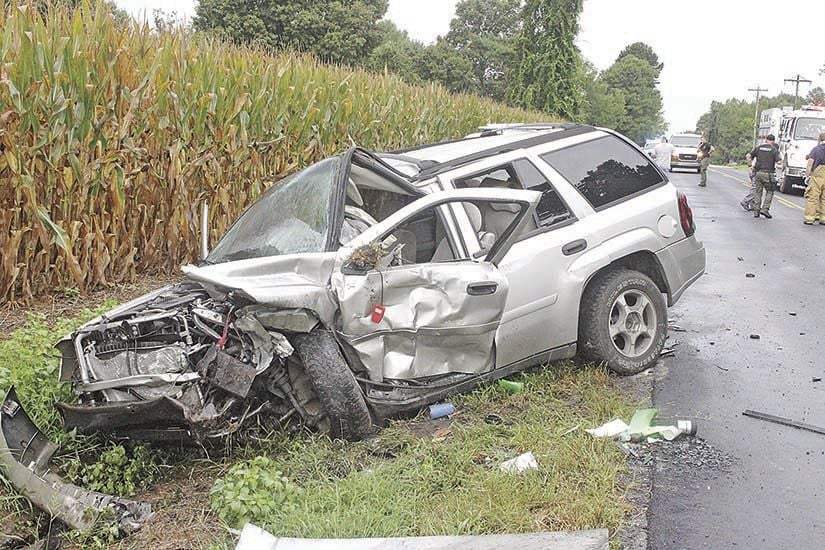 The smashed remains of an SUV rest along the southbound lane of KY 121 South Friday morning after colliding with a car. The driver of the car died at the scene, while the driver of the SUV was taken to Murray-Calloway County Hospital with injuries.

Emergency personnel stand beside a car Friday morning on KY 121 South near the Cherry Corner community of Calloway County. The driver of the car died at the scene.

The smashed remains of an SUV rest along the southbound lane of KY 121 South Friday morning after colliding with a car. The driver of the car died at the scene, while the driver of the SUV was taken to Murray-Calloway County Hospital with injuries.

CALLOWAY COUNTY — One person died and another was injured Friday morning after a two-vehicle wreck east of Murray near the Cherry Corner community.

Calloway County Sheriff Sam Steger said the wreck occurred at about 8:30 a.m. on KY 121 South near the Cherry Corner community in the 6000 block of the highway. He said two vehicles, a car and an SUV, collided nearly head on.

As a result of the wreck, Calloway County Coroner Ricky Garland said the driver of the car, whom he identified as Mary Joye Cole, 80, of New Concord, was pronounced deceased at the scene. He said Cole died of multiple blunt-force injuries. He said no autopsy will be scheduled.

Steger said that this was not the way he wanted to begin a new day on duty.

“No, it is not. It’s just terrible,” said Steger, who was among the first emergency personnel to arrive on the scene. “You just never know what’s going to happen from day to day.”

An accident reconstruction team from Kentucky State Police responded to the scene. This required the highway to be closed to all traffic until just before noon, the Calloway County Sheriff’s Office said.

A driver who witnessed the wreck, but wished to remain anonymous, said that he was following the car as it traveled west on 121 toward Murray. The driver said the SUV then crossed the center line and the wreck unfolded in front of him.

He said he was probably four car lengths behind the car when it was struck nearly head on. He said the car was sent into a spin before leaving the highway and coming to rest in the front yard of a residence. The SUV was sent just off the eastbound lane near a corn field.

He said he immediately exited his vehicle and, first, went to the SUV to see if help was needed. He said he found the lone occupant was a male who was bleeding from the head and had an obvious injury to a leg. He said the male had just freed his leg from being trapped beneath the dashboard but feared his ankle was broken.

The witness then said he went to the car and found the lone occupant was a female driver, whom Garland later identified as Cole. He said she was unresponsive but was still breathing, though very shallow. He said she would move occasionally. After a few seconds, she lost a pulse. He said the condition of the car would not allow him to perform CPR and he waited for help to arrive.

Emergency personnel arrived a short time later, but they found the female driver had already died. The male driver was removed from the SUV and taken to Murray-Calloway County Hospital by ambulance. Steger identified the male as Shannon Jarvis.

Calloway County Fire-Rescue Chief Tommy Morgan said his personnel were ready to use extrication tools to free the female, but it was too late when they arrived.

“We were wanting to use them too,” Morgan said, acknowledging that those later were used … to remove the female to an awaiting coroner’s van. “I hate to say that, too.

“I don’t know what’s happened this year, but it seems like our wreck calls have gone crazy. Normally, we have only three or four wrecks a year where we have to use extrication tools. We’ve already had that this month.”

The highway was wet at the time of the wreck after morning rains fell. Steger said he is not certain how much of a factor this may have played in the collision.

Just Monday, CCFR extrication tools were needed for a wreck on KY 641 South near Midway.