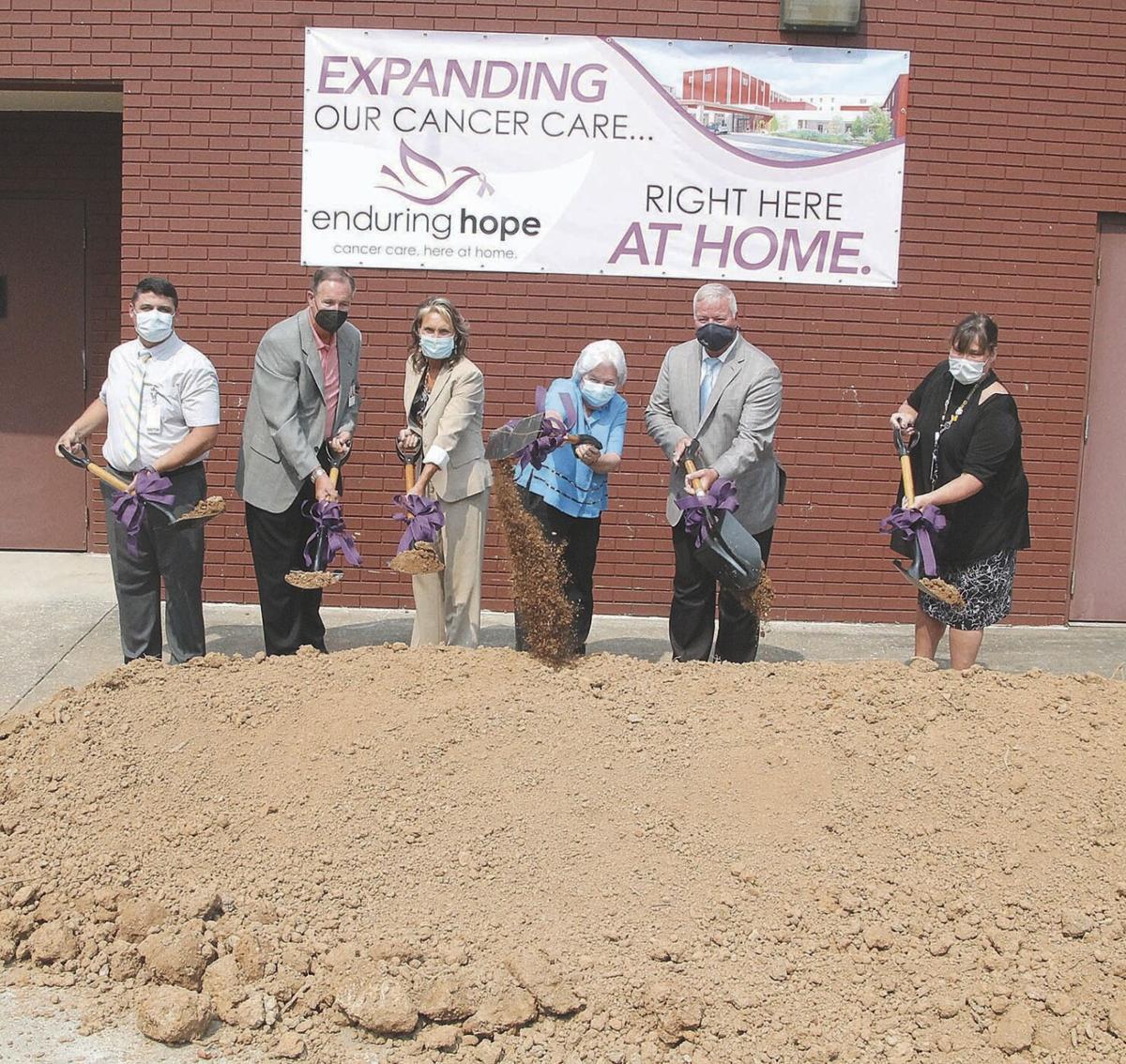 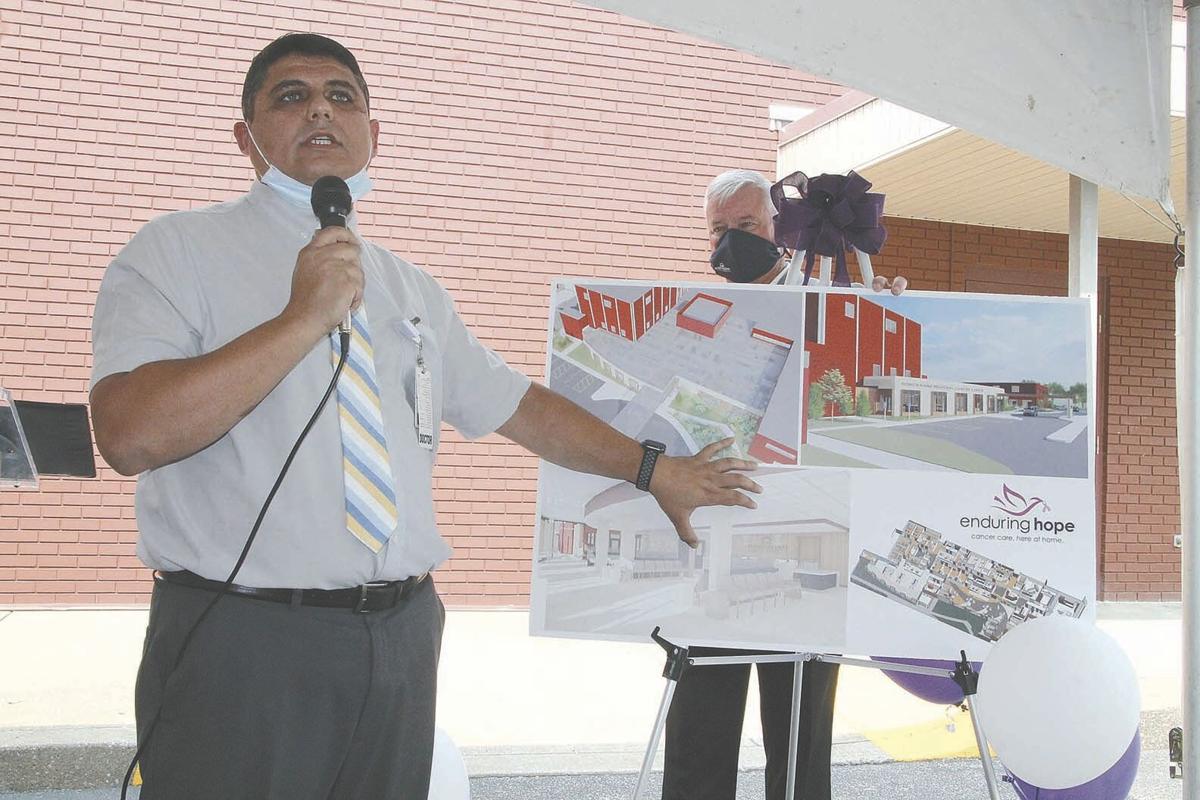 Dr. Zuhair Ghanem with Oncology and Hematology of Murray points to illustrations of the planned new cancer center as he talks about why the additional space is needed. The new building would ensure that patients could see their doctors and get all their treatments in one building, he said. MCCH CEO Jerry Penner is seen holding the drawings in place. 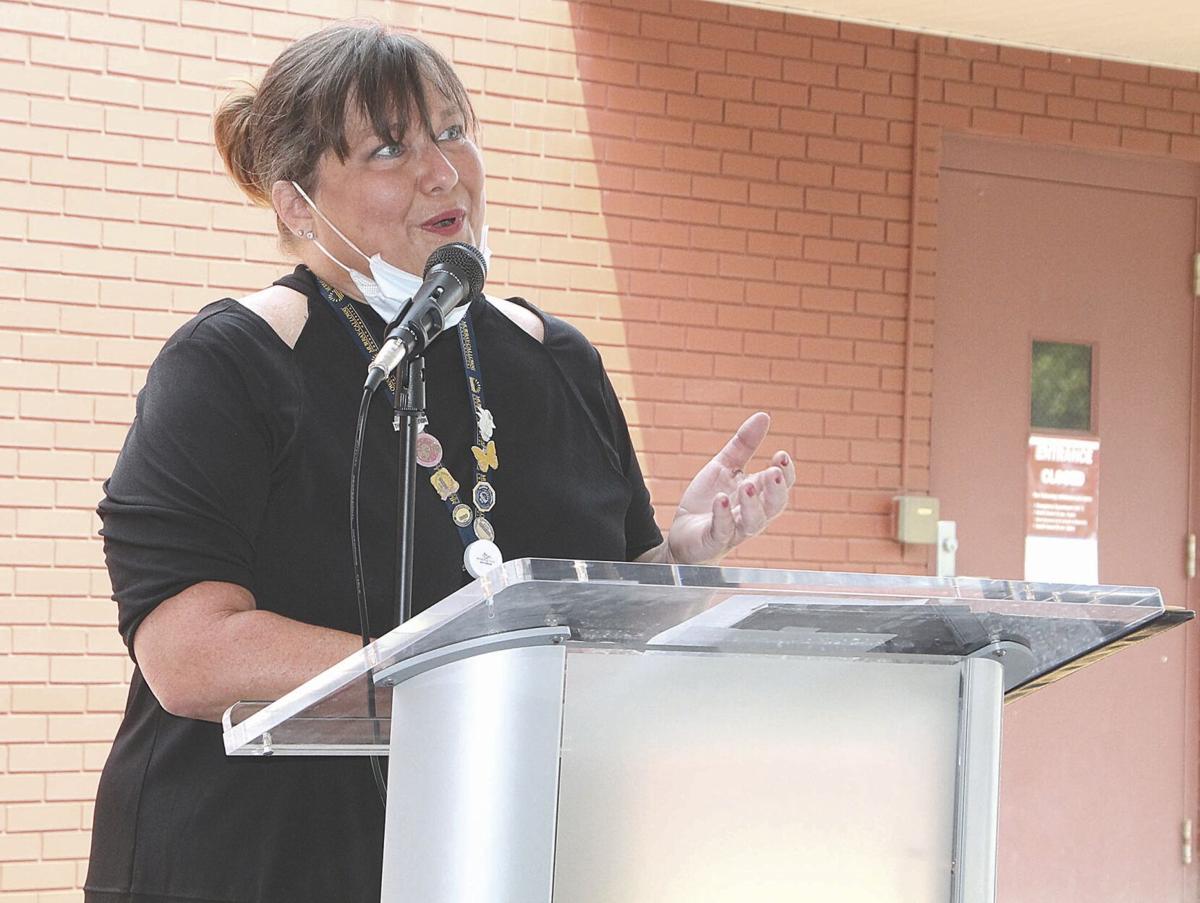 Lisa Shoemaker, senior philanthropy officer for The Foundation at MCCH, speaks about her own experiences when she had cancer and why she was so glad she didn't have to travel out of town for her treatments. 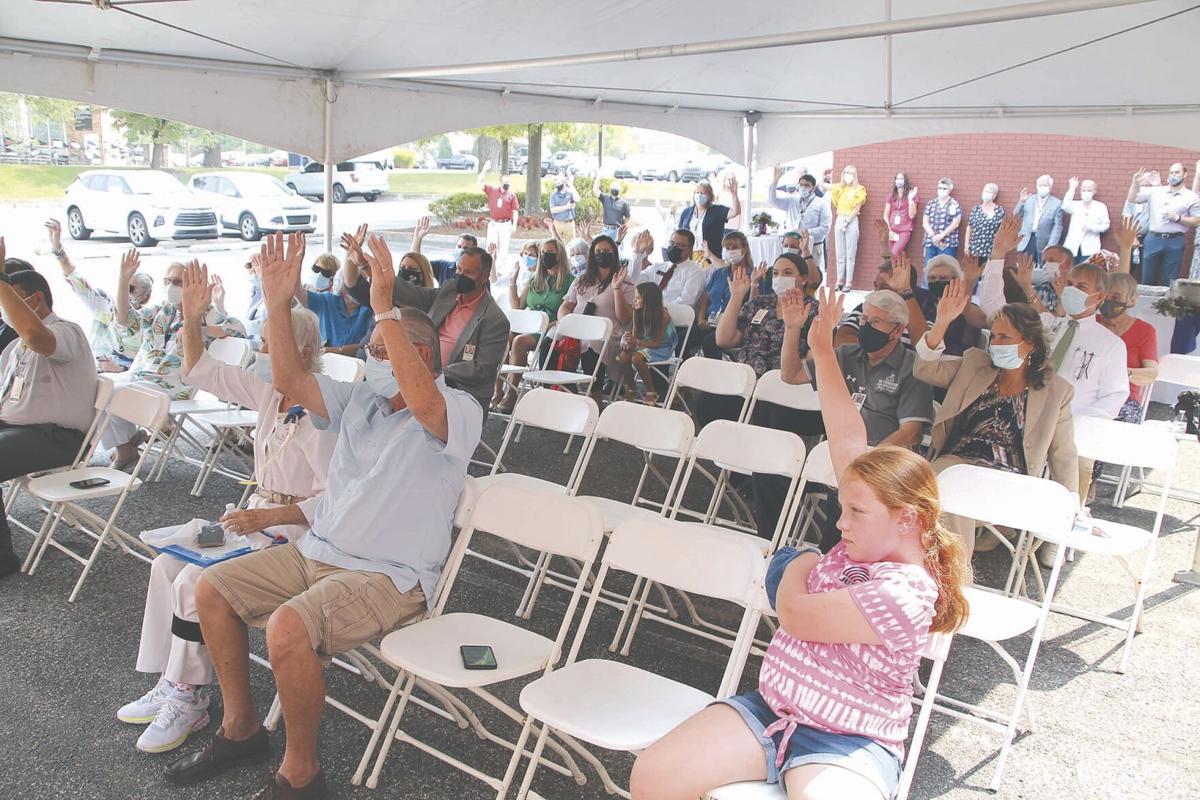 Attendees of Thursday's groundbreaking ceremony raise their hands after Lisa Shoemaker asks how many of them have someone in their families who has had cancer. 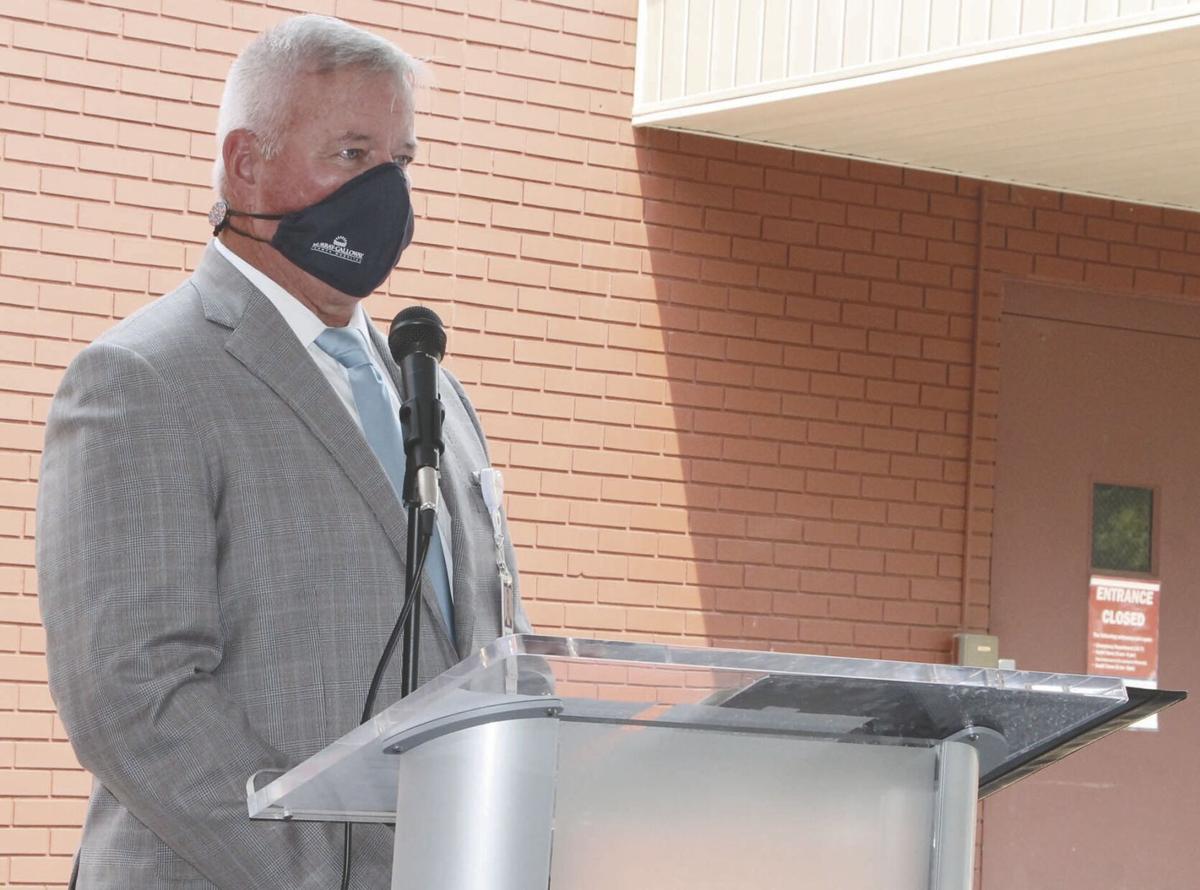 Dr. Zuhair Ghanem with Oncology and Hematology of Murray points to illustrations of the planned new cancer center as he talks about why the additional space is needed. The new building would ensure that patients could see their doctors and get all their treatments in one building, he said. MCCH CEO Jerry Penner is seen holding the drawings in place.

Lisa Shoemaker, senior philanthropy officer for The Foundation at MCCH, speaks about her own experiences when she had cancer and why she was so glad she didn't have to travel out of town for her treatments.

Attendees of Thursday's groundbreaking ceremony raise their hands after Lisa Shoemaker asks how many of them have someone in their families who has had cancer.

MURRAY – A small crowd braved the morning heat on Thursday to show their support as Murray-Calloway County Hospital broke ground on its planned new cancer center.

MCCH held the groundbreaking ceremony under a tent in a parking lot on the northeast side of the hospital. After opening with a moment of silence to honor the 50th Calloway County victim of COVID-19 who died earlier this week, MCCH CEO Jerry Penner reflected on the historic nature of this occasion. He said he and his wife, Jamie, recently traveled to Virginia and visited some Civil War battlefields, as well as George Washington’s estate, Mount Vernon. He said standing in front of Washington’s tomb was a humbling experience, and compared that sense of history to the occasion everyone was gathered for Thursday.

“Today, I’m sure the founder of Murray Surgical Hospital, William H. Mason, is probably smiling right now,” Penner said. “He’s smiling because of the tremendous progress that we have instituted here at this facility over the last 111 years. It’s pretty remarkable. I’m sure it was pretty humble when he started out with a small cottage on Fourth Street, formerly Curd Street, to where this facility stands today and the services we provide to this community. I’m sure he’s also smiling for decisions the board of trustees has made over the last 15 years.”

As examples, Penner said the building of the South Tower added 53 new, private in-patient rooms, a brand-new ER, a brand-new radiology department and a brand-new surgical department. He also listed the inpatient rehab facility, the geriatric behavioral health facility and the Anna Mae Owen Residential Hospice House, which at around $4 million, was the largest philanthropic effort the hospital has put together to date. He also mentioned the interventional cardiology program started in early 2020, 3D mammography machine, two state-of-the-art CT scanners and a gamma camera.

“So we’re trying to bring in the best things that we possibly can for our physicians, and the board’s been making decisions to ensure that we continue to provide the best for our community,” Penner said. “And now, they’ve decided to take on a brand-new project, and that is not a renovation of our old regional Cancer Center, but instead a new cancer center for this community.

“Now, why would they make this their No. 1 priority? Let me tell you why. Because it’s the No. 1 community health challenge that we face today,” he said.

Penner said that because of the COVID-19 pandemic, many people avoided the hospital last year, so there was a slowdown in cancer diagnoses. But now, people are coming in and getting diagnosed late, sometimes finding out they already have Stage 3 or Stage 4 cancer. The number of infusions and radiations that have had to be done numbers is in the tens of thousands, Penner said. It is important to provide this care locally because patients undergoing chemotherapy infusions or radiations treatments do not have the energy to travel back and forth to Paducah or Nashville, Tennessee multiple times a week.

“The cancer center has taken significant wear and tear, and as I look around and see many cancer survivors and those that weren’t so fortunate to have survivors in their families, they can tell you and attest to the fact that we need to upgrade what we have,” Penner said. “And the board plans to do that, and that’s why we are here today for this groundbreaking ceremony for something that is going to be extremely spectacular.”

Penner mentioned friends he had made in Murray who had died of cancer, including Sid Easley, Bob McGaughey and Woody Herndon, whose wife, Donna, is the chair of the Enduring Hope Campaign, raising money for the new cancer center.

Dr. Zuhair Ghanem with Oncology and Hematology of Murray said that according to the National Cancer Institute’s Cancer Registry, Calloway and the two neighboring counties served by the Regional Cancer Center documented 3,950 cases of cancer between 2014 and 2018. He said that was equivalent to 2.7 patients a day being diagnosed with cancer.

“That is a huge volume to be able to take care of in our community; it needs a lot of resources,” Ghanem said.

Ghanem listed the large number of physicians a typical cancer patient would have to see and appointments they would attend over the course of a year after being diagnosed. The diagnosis and treatment of every single patient is a huge team effort, he said.

“This is team work that is so demanding,” Ghanem said. “That is fine; we can do that. We have all the resources. We have an excellent pathologist, amazing surgeons, we have all the doctors that are capable of doing that. The problem is, where do you administer these services? I’ll give you an example. I’m sitting here, and looking at this heat. See the building behind me? This is where I see my patients; that’s the oncology clinic. When the patient goes to do the radiation or to get chemo, which I order, they have to cross the street (similar to) the street behind you.

“The patient has to cross the street in this heat, and you’re not talking about me and you coming to work. You’re talking about chemo patients – some of them are in their 70s and 80s and some of them are in a wheelchair. Sometimes the patient is sick and is dehydrated and needs fluids. They have to literally move out of the building, cross the street behind you to go to get a liter of fluids or see the radiation doctor and receive their radiation. The lab is not where we are sometimes and … the surgeon is in a different building.

“So you’re talking about months and months of extensive and detailed treatment where we do not have the space or the place to do that. And that’s why this cancer center is important. It’s not a luxury, it’s a need. We need it. Our patients need it and our community needs it.”

After Penner asked for another moment of silence to honor radiation oncologist Dr. Bill Giese, who died in May at the age of 66, MCCH Board of Trustees Chair Steve Owens spoke about his experience as a cancer survivor. When he was diagnosed at Vanderbilt University Medical Center, he said he was relieved when he learned that he could get all his treatments in Murray. He said that when you have to get 27 doses of radiation every day and getting chemo at the same time, you don’t want to drive to Paducah to get them.

Owens said several other cancer survivors have served with him on the board over the years, and he also mentioned that an amazingly large number of cancer survivors used to walk around the track every year when Relay for Life was held at Murray State University’s Roy Stewart Stadium. These were just two ways he was reminded of how many people suffer from cancer locally.

“We need this (new cancer center), folks,” he said. “The board has had it as a priority and we’ve looked at expanding our existing facility, but it wasn’t feasible. Building a whole new one is the way to go, and we are going to do that.”

Lisa Shoemaker, who was previously on the MCCH board and is now the senior philanthropy officer for The Foundation at MCCH, is also a cancer survivor. She said her grandmother received cancer treatments shortly after the current Regional Cancer Center opened in Murray, and as a single mother, Shoemaker said she was also grateful to not have to travel for her treatments. She thanked everyone who had already donated to get the new cancer center started, and she encouraged people to come talk to her about further donations and naming opportunities.

Pinnacle Inc. of Benton is the contractor on the project, and JRA Architects designed the building, Penner said. Bacon Farmer Workman Engineering and Testing is providing engineering services. The completion date for the building is currently expected in June 2023.