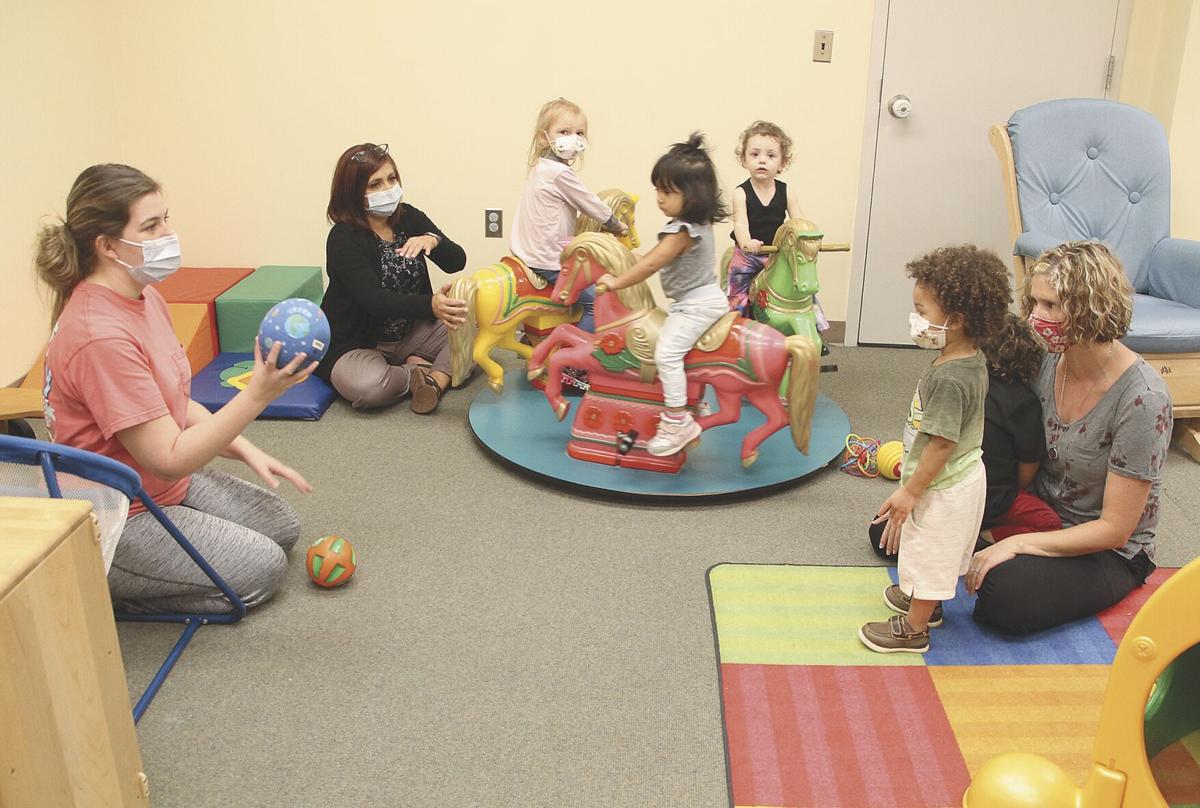 Toddler teachers Courtney Jones, left, Nancy Leathead and Christy Hall play with children in one of the Murray Head Start classrooms in Alexander Hall with a new Novaerus air disinfection device. The devices are intended to protect against the spread of COVID-19 and other respiratory illness. The unmasked children pictured are younger than 2, which are not recommended by the CDC to wear masks. 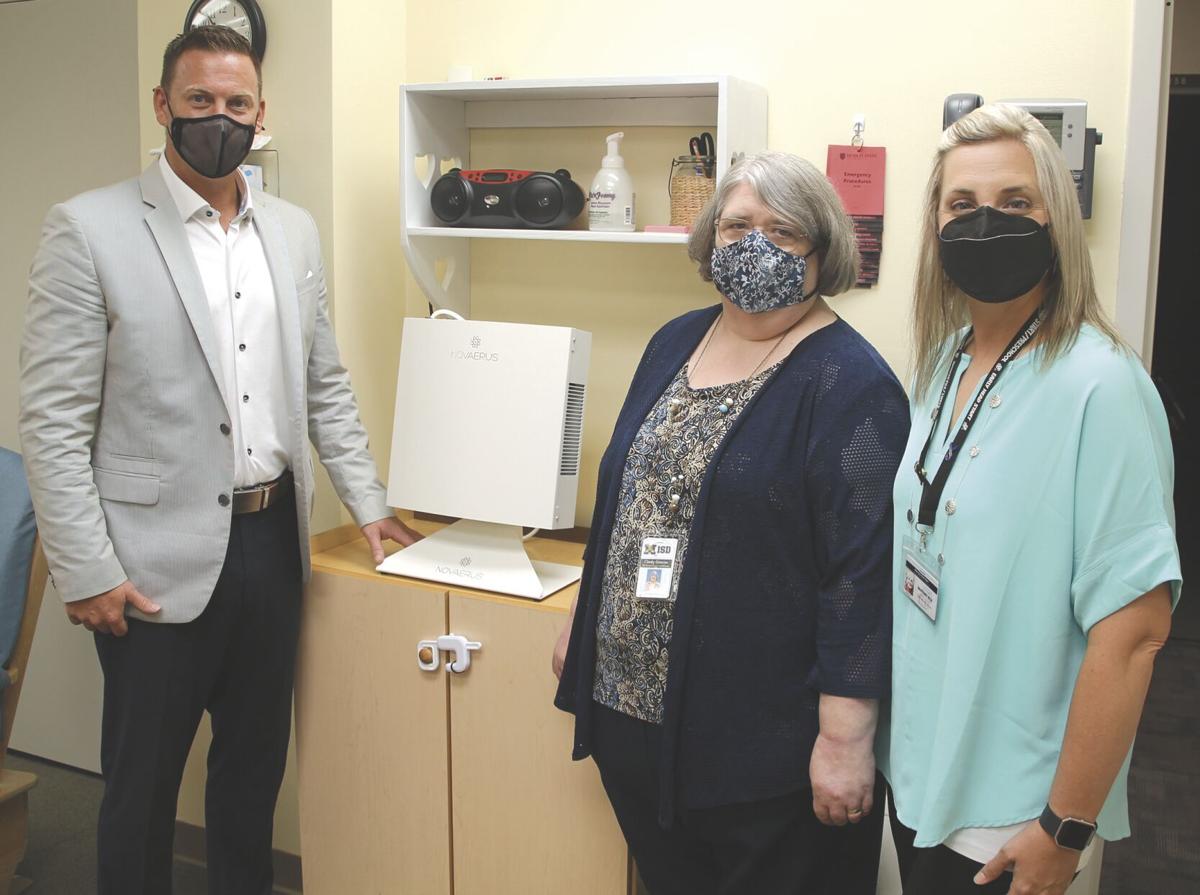 Toddler teachers Courtney Jones, left, Nancy Leathead and Christy Hall play with children in one of the Murray Head Start classrooms in Alexander Hall with a new Novaerus air disinfection device. The devices are intended to protect against the spread of COVID-19 and other respiratory illness. The unmasked children pictured are younger than 2, which are not recommended by the CDC to wear masks.

MURRAY – With COVID-19 and the Delta variant keeping all but one Kentucky county firmly in the Red Zone for community spread, local educators are doing what they can to protect the children under their care. Since children under 2 are not able to wear face masks, the need for protection in that age range is even more urgent.

With that in mind, Murray Head Start recently had around 25 air disinfection devices installed in their classrooms and offices, with plans to expand beyond that in the future. Murray Head Start is a federally funded program overseen by the Murray Independent School District. Locally, it is run out of Alexander Hall on the Murray State University campus, but since its start in 1965, the program has expanded to provide preschool services in the eight-county Jackson Purchase area, in partnership with 11 school districts, according to MISD’s website.

Brad Cleaver, vice president of sales for MEDformance, said the company had worked with several school districts in the area to install the devices.

“We are a national distributor for WellAir, a leader in clean air technology, and we’re doing everything we can to place these devices in schools to be able to help the administrators and the directors of programs to try to add another layer of protection to keep kids and staff healthy and try to keep them in school for in-person learning,” Cleaver said. “This is patented technology that’s used within health care facilities and long-term care facilities, as well as other commercial settings. It uses a coil technology called NanoStrike, which is not a filter technology. It is separate and unique (compared to devices that filter air).

“The best analogy from a physics standpoint to describe it is that it is very similar to a lightning strike. When air travels over one of the coils, it deactivates pathogens and microorganisms (in the air). It’s removing not only airborne illnesses and viruses, but also pathogens that may lead to asthma and allergies, which, outside of a pandemic, is one of the main reasons for absenteeism. So it’s not just to address COVID-19; it’s to create a healthier environment and (be part) of a layered approach with the directors and educators to mitigate as much risk as possible to be able to keep kids and staff in school.”

Cleaver added that he has three children who attend Calloway County Schools, so improving the health of the area’s children means a lot to him, not just as a representative of his employer, but also as a parent.

“We have a health services component of our program, so we’re addressing those health needs constantly,” Graves said. “Through the pandemic, we were able to obtain some additional funding to make some choices about what would be long-term benefits to our program. We looked at a number of products for air purification. Many of our classrooms and offices are in older buildings, so air systems are a little older … so we wanted to find something that would improve the air quality in classrooms and offices.

“We did a lot of research and communication on various systems and selected the Novaerus system (a WellAir brand), which we felt was the best investment to promote the air quality. We took a multi-phase approach to the process, and Phase 1 was kind of our initial test phase, so we put it in some of the offices in older buildings to test if we were seeing a difference. In Phase 2, we just (recently) installed the devices in all of our Early Head Start classrooms – which are serving children from birth up to age 3 – in five counties that our program serves. Our purpose is improving health, reducing illness and reducing absenteeism for both children and staff.”

Graves said the devices had so far been installed in roughly 15 classrooms and about 10 offices, with an eye now on Phase 3. She said it cost less than $35,000 to place the devices in the Early Head Start classrooms in Calloway, Graves, Fulton, Hickman and McCracken counties. She said the additional funding was made available to the program because of the pandemic.

“We have worked really hard to be good stewards of the taxpayer money that supports the federal programs and try to invest in something that is going to be long-lasting, long-term, easy to maintain and provide those benefits over a period of time, not just as a quick and immediate response to the COVID situation,” Graves said.

Graves said the investment is worth it because it is a greater expense over time to deal with more frequent staff illnesses, and when children have to miss school for sickness, it has a negative impact on their learning. She noted that in addition to COVID-19, children spread multiple kinds of airborne illnesses, and since the youngest children are not supposed to wear masks, and no young children can be vaccinated, air purification benefits everyone. She explained that while children ages 2 and older are currently required to wear masks in Head Start facilities, the Centers for Disease Control and Prevention does not recommend that children younger than 2 wear masks.

Whitney Pile, a registered nurse and the health services coordinator for Murray Head Start, said the facilities had seen a later flu season during the summer and quite a bit of RSV (respiratory syncytial virus), which is common in young children. She said that since Aug. 1, about 30-40 quarantines had been necessary among children and staff because of COVID-19. She said the difference since the air purifiers had been installed had been noticeable.

“Phase 1 involved trying these devices in staff offices to see the (effects) before and after,” Pile said. “Before, when reporting to work, they were saying they would have allergy-like symptoms with watery eyes, some were experiencing dermatologic symptoms from potential exposure in our older buildings. So we did put the air purification devices in our offices, and within two to three weeks of having them in the offices, staff were no longer reporting symptoms. Another thing was that staff were also saying that their offices, after extended weekends where there were no people in the building, smelled cleaner. They didn’t have a musty smell from people not being in the buildings.”