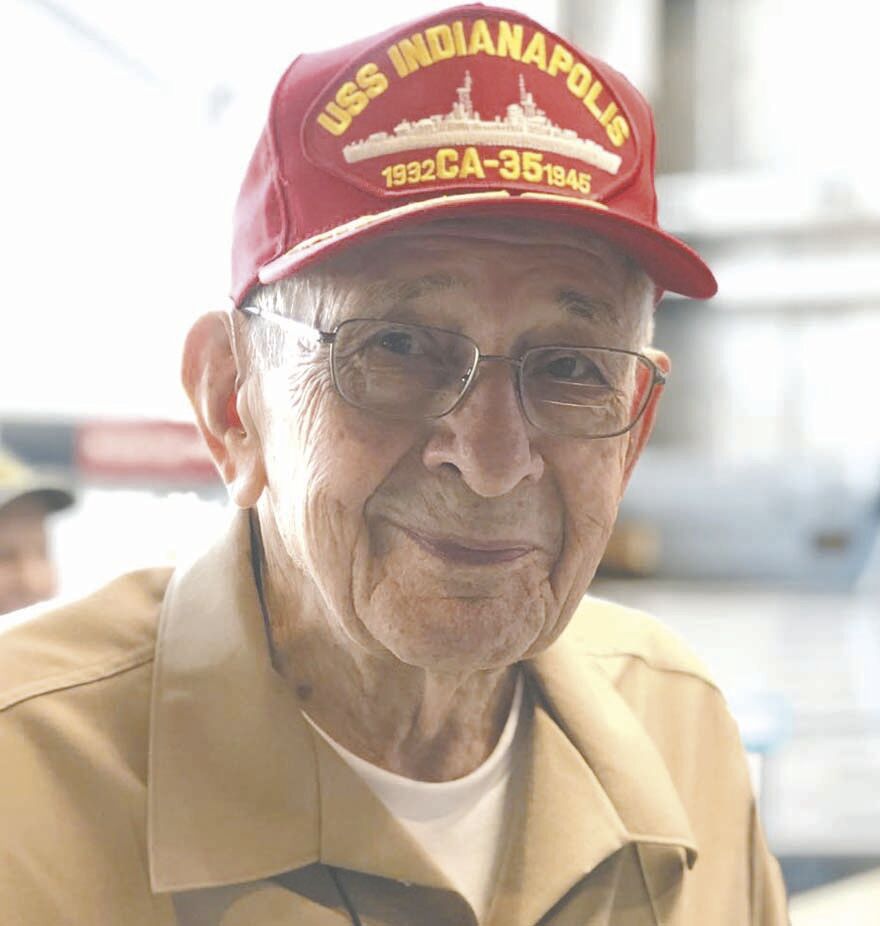 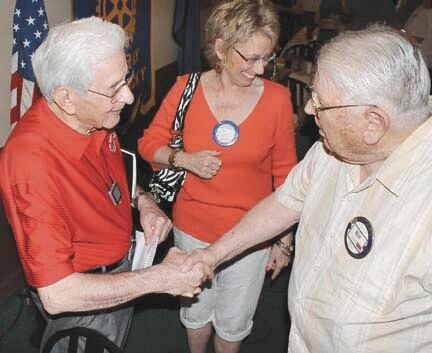 Murray native Ed Harrell, the last survivor of the sinking of the USS Indianapolis near the end of World War II, left, greets Bill Crass in 2013 following Harrell's presentation in front of the Rotary Club of Murray. Also shown waiting her turn to greet Harrell is Jane Shoemaker.

Murray native Ed Harrell, the last survivor of the sinking of the USS Indianapolis near the end of World War II, left, greets Bill Crass in 2013 following Harrell's presentation in front of the Rotary Club of Murray. Also shown waiting her turn to greet Harrell is Jane Shoemaker.

CLARKSVILLE, Tenn. – Murray native Edgar Harrell, the last surviving Marine of the sinking of the USS Indianapolis during World War II, died Saturday at the age of 96, several national news outlets have reported.

According to Fox News, a Facebook group devoted to preserving the ship’s legacy reported the news. According to Ledger & Times archives, Harrell – who had moved to Clarksville, Tennessee years ago – served in the war from 1943 through January 1946. He was one of 1,100-plus people to be thrust into the Pacific Ocean after the American battleship USS Indianapolis was sunk by a Japanese submarine on July 30, 1945, beginning a saga that did not end until he was discharged from a San Diego hospital after he developed an illness following his rescue from the Pacific Ocean.

“I believe in miracles, but there is a miracle beyond my power of understanding, the miracle that I am here today, one of 317 out of 1,197, that I’m here today and not with my shipmates at the bottom of the Pacific Ocean,” Harrell said during a 2013 appearance in front of the Rotary Club of Murray.

The survivors’ plight ended in unlikely fashion when a plane preparing for a bombing run on Japanese submarines spotted them in the water four days after the sinking. The trail of men, both survivors and deceased, was about 75 miles in length. Eventually, a Navy seaplane landed and 56 survivors, including Harrell, used it for shelter from the elements of doom until a ship arrived for rescue.

Those four days for Harrell, though, were nothing short of agonizing, fraught with uncertainty and the ever-present fear, he said.

“By the next day, we had company,” he said, describing large sharks that fed on the survivors. “We tried to stay together, but it wasn’t long until one of us would become a straggler by himself and you’d hear a blood-curdling scream and then you’d see many, many fins in all of the bloody water and you’d steer clear of that.

“You dare not to check who your buddy might be.”

He also saw how other threats, namely dehydration, took their toll.

“Your buddy could become your enemy,” he said of how sailors drinking salt water began hallucinating, even going so far as to attempt stabbing fellow survivors because they thought they were Japanese soldiers. “On the second day, we saw a little rain cloud. When you are so desperate for water, you go , ‘Thank you Lord! Thank you Lord!’ and you cup your hands for just a few tablespoons.”

Harrell became a patient at Balboa Hospital in San Diego, Calif., after his rescue, taking the part of a “pin cushion” from 11.8 million units of penicillin  in 29 days at one point before an operation. All along, though, he said knowing his eventual wife, Ola Mae Cathey, was waiting for him was a driving force in his return.

“‘I don’t want to die, I’ve got family back in Murray, Kentucky,’” he said, remembering thoughts he had during his days in the ocean. He later wrote “Out of the Depths” with his son David, and he is reportedly the only survivor to have authored a book on the disaster.

The remains of the USS Indianapolis were found in the Philippine Sea in August 2017. Fox News reported that Harrell and the seven other survivors of the crew were honored in 2020 with the Congressional Gold Medal on the 75th anniversary of the ship’s sinking. WTHR-TV reported that after Harrell’s death, only five survivors remain.