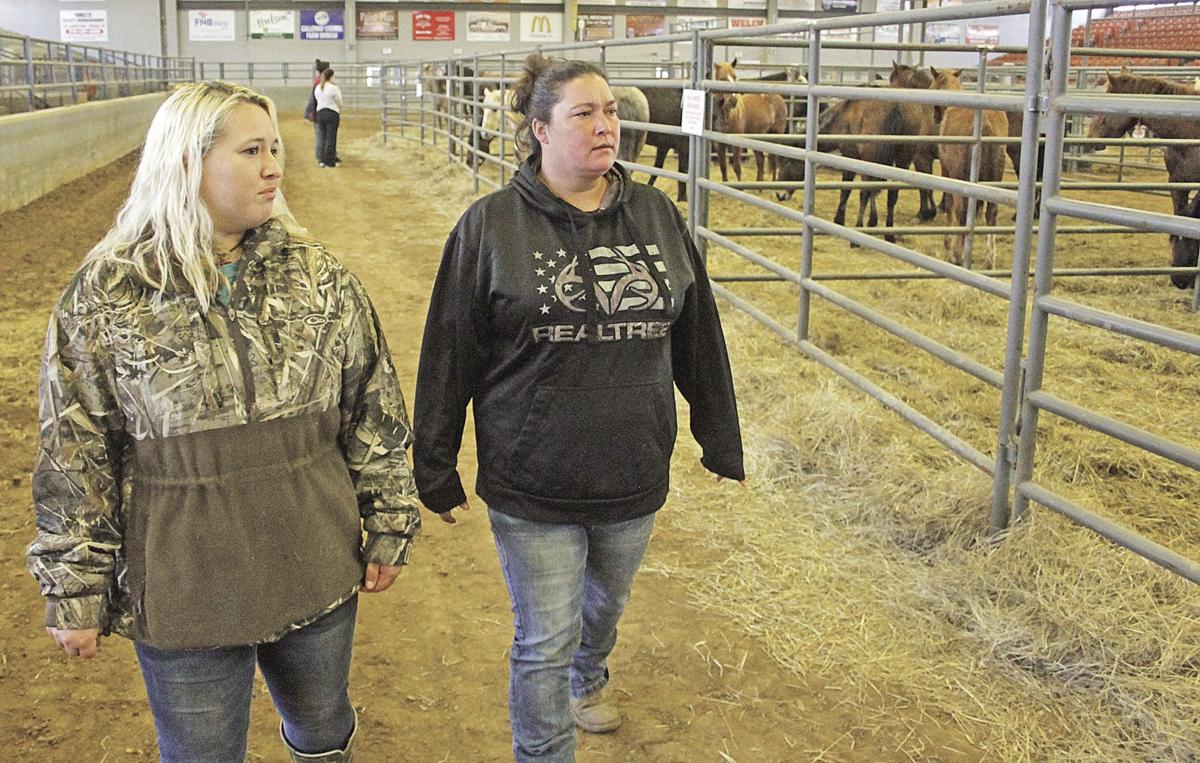 Shea Fortner of Muray, left, and friend Celeste O'Bryan of Union City, Tennessee stroll Friday afternoon through the Cherry Expo Center on the Murray State University campus as they sought a horse during the Bureau of Land Management Wild Mustang and Burro Adoption in Murray. 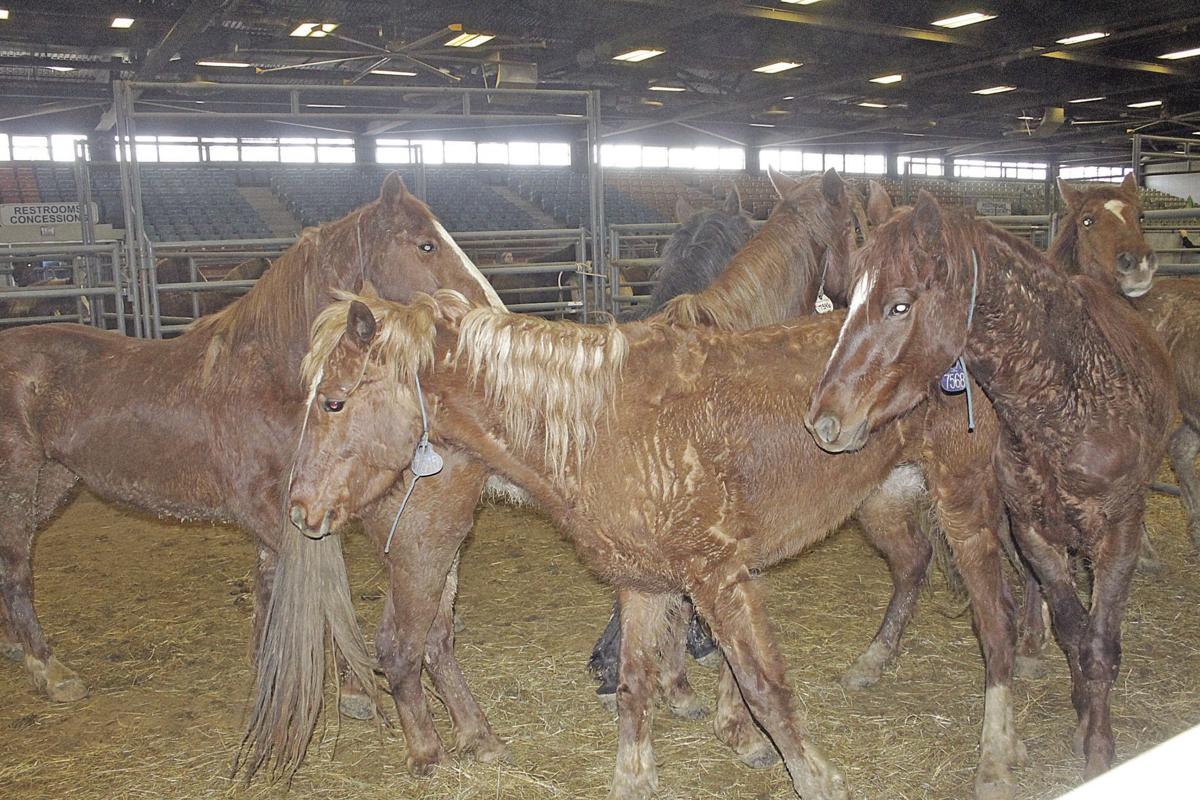 A group of wild mustang horses gathers inside a holding pen Friday afternoon during the Bureau of Land Management Wild Mustang and Burro Adoption event at the Cherry Expo Center on the Murray State University campus in Murray.

Shea Fortner of Muray, left, and friend Celeste O'Bryan of Union City, Tennessee stroll Friday afternoon through the Cherry Expo Center on the Murray State University campus as they sought a horse during the Bureau of Land Management Wild Mustang and Burro Adoption in Murray.

A group of wild mustang horses gathers inside a holding pen Friday afternoon during the Bureau of Land Management Wild Mustang and Burro Adoption event at the Cherry Expo Center on the Murray State University campus in Murray.

MURRAY – One person who was very excited to see that this past weekend’s U.S. Department of the Interior Bureau of Land Management Wild Mustang and Burro Adoption event did not, in fact, fall victim to the ongoing coronavirus pandemic was Shea Fortner of Murray.

She came to the Cherry Expo Center on the Murray State University campus not just to look at the nearly 50 animals on display. She came looking to take one home, because she not only has experience with a mustang, she has had tremendous success with one.

“I adopted one a couple of years back from right here, when they had another adoption event, and he’s really good for riding now,” Fortner said.

To those who are uneducated on these types of horses, riding them might seem like an impossibility since the horses have been removed from their playground, where they roamed free on a range that basically consists of the western half of America from New Mexico to the Dakotas. In other words, the idea of taming an animal whose whole life has been spent devoid of contact with people would sound like a pipe dream to many.

“He was unbroken when I got him,” Fortner explained of how the horses, even after being off the range, maintain their wild nature in the six months to a year before they are taken to adoption events like the one that was offered the past three days in Murray. “They are a lot different than domesticated horses, yes. You’ve got to go about training them in a completely different way. With mine, if is clear that he doesn’t like to be forced and I know some people like to try using a whip and stuff, but you can’t do that with him.”

Fortner said the process of breaking her horse of his wild nature was long and required great patience, along with something else – love.

“It took several months of me pretty much doing nothing with him besides going out and feeding him, then just sitting there with him all day and him getting used to me being there,” she said. “You’ve got to remember, they’re not used to people. So he was real flighty and whatnot because all they’re trying to do is protect themselves. They don’t intentionally mean to hurt anybody if they get like that. When I got him, he didn’t even have a halter on him. It took several weeks of me messing with him for hours, just to get a halter on him, but, it was definitely rewarding when that happened.

“After all of that hard work, it was great to get to that point, and it was even better when I was able to get a saddle on him. He is now willing to learn pretty much anything. They are really, really smart.”

Fortner’s friend and business partner, Celeste O’Bryan of Union City, Tennessee, was also at this year’s event and said there are certain things she examines when scanning the herd for the right horse.

“You look at what I call their confirmation, their demeanor, how they’re acting,” said O’Bryan, who has two areas where she keeps and trains horses in the area. “But one of the biggest things you look at are their eyes. You can tell a lot about a horse from those eyes. If they’ve got calmness, that’s one you might want to take a look at. I’ve got six acres down near Union City and another 42 over near Wingo (in Graves County), so I do a lot of the ground training and (Fortner) does the saddle work.”

O’Bryan also noted the proverbial elephant in the room, that this was one of the few public events still happening anywhere in western Kentucky over the weekend.

“I’m not real surprised they went ahead with it, and I’m very glad they did,” she said. “With everything getting canceled, it’s good to be able to get out of the house and do something, especially something I enjoy. It’s ridiculous what’s happening. I mean, (one night last week), I went to Walmart and there was no toilet paper anywhere.”

There were others besides Fortner and O’Bryan seeking to adopt a new addition to a farm or facility this past weekend. Gant Massey, the Bureau of Land Management’s assistant district manager for resources for the Southeastern States District, said 15 of the animals were already claimed on Friday’s first day. He said that kind of thing happens frequently when this event comes to Kentucky, known worldwide as an equine haven, even though mustangs come from a different part of the country.

Horses are horses, he said, and Kentuckians traditionally find the mustang very much to their liking.

“It is because they know they’re wonderful animals, and they’ve seen them on programs and shows running free across an open range. It really moves your heart,” Massey said, adding that the range is monitored constantly, and when it becomes obvious that the area is suffering from too much hoof traffic, it is time to thin the herd, and create opportunity for others.

“Each district looks at the herd management areas and determines which areas have a discrete population and discrete geographical areas with the most horses where the range is suffering the greatest from having too many animals relative to the number that is sustainable,” he said. “So we have different types of gathers in removing animals from the range. Sometimes, we do what are called water-and-bait gathers, where we have an open corral, we have the horses come in and close the gate behind them. Other times, we do have helicopter gathers, where we use a helicopter to guide them to a point where we can take them off. We try to do these as gently as we can.”

Though still wild, the horses do receive care after their removal, with veterinarians examining them. Hooves are also trimmed before they are brought to an adoption event, along with a freeze branding being applied to their necks for identification purposes.

“What our guidelines and management practices are all about is looking out for the health of these horses, and we want to get these horses out and to the public as healthy as they can be. A good horse going to a good home is our goal,” he said, adding that some new owners can opt to be part of what is known as the Extreme Mustang Makeover, a program of the Mustang Heritage Foundation.

In that program, new owners are given 100 days to break their gentle horses and train them. If, in that 100-day period, the owners have been successful in this mission, they can be part of a contest that Massey said is a thrill to watch.

“Really, it’s just a chance to see how they’re doing and what kind of progress has been made, but I’ve seen some horses that have trained to actually lie down on a sofa, along with other tricks. It truly is amazing and it’s a testament to the relationship between the trainer and the horse.”

Fortner said that, Extreme Mustang Makeover or not, her true joy is now being able to enjoy the relationship with her horse, and do things not even possible before, like go for a ride in the country.

“That’s what we live for, and it’s a big stress reliever,” she said.