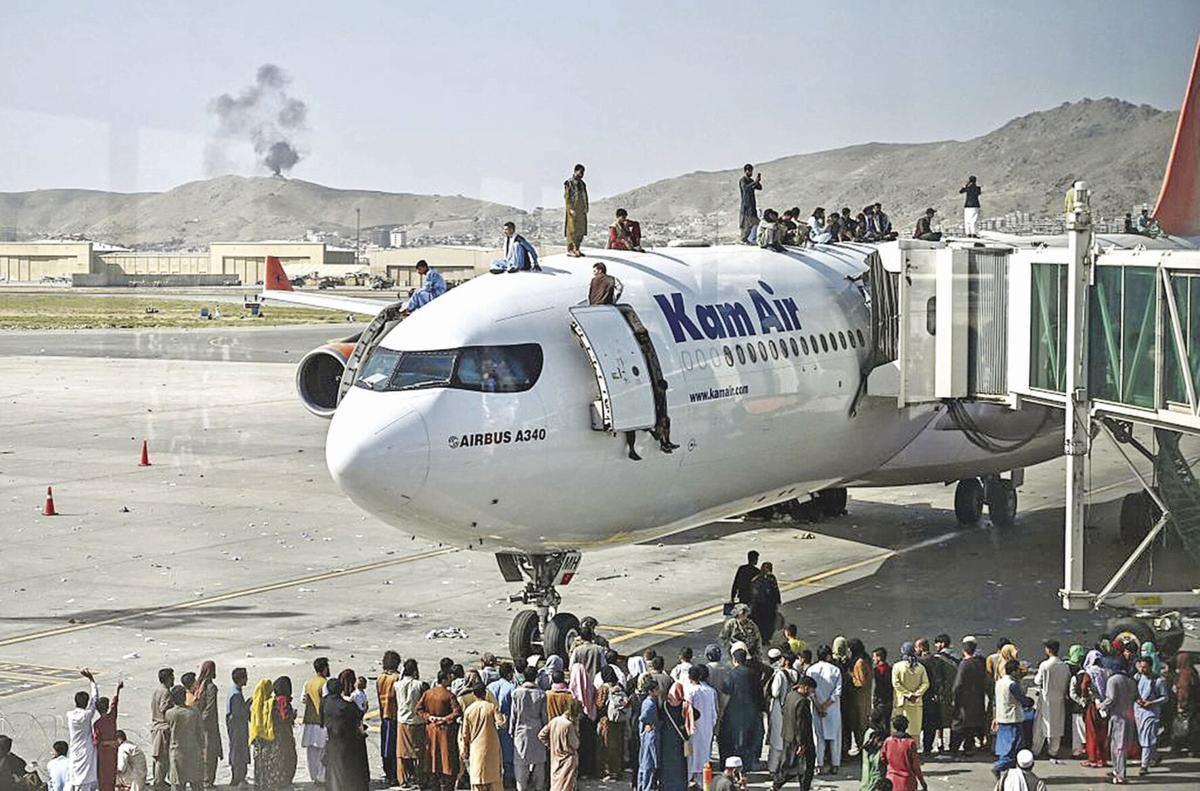 Afghan people climb atop a plane as they wait at the Kabul airport in Kabul on Aug. 16, after a stunningly swift end to Afghanistan's 20-year war, as thousands of people mobbed the city's airport trying to flee the group's feared hardline brand of Islamist rule. 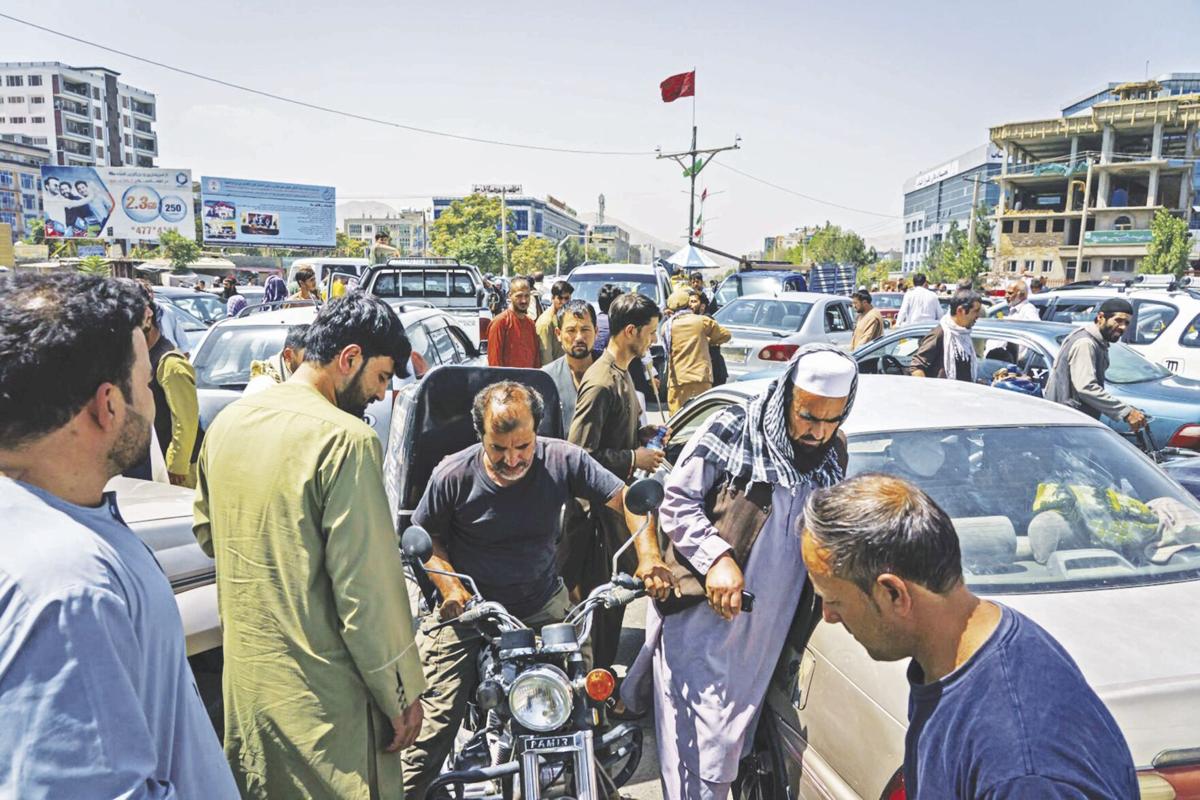 KABUL, AFGHANISTAN -- AUGUST 15, 2021: Pedestrians, motorists ended up in a traffic grid lock as the Afghans rush to safety with the uncertainty and rumor swirling that Taliban enter the city and take over, Kabul, Afghanistan, Sunday, Aug. 15, 2021. (MARCUS YAM / LOS ANGELES TIMES)

Afghan people climb atop a plane as they wait at the Kabul airport in Kabul on Aug. 16, after a stunningly swift end to Afghanistan's 20-year war, as thousands of people mobbed the city's airport trying to flee the group's feared hardline brand of Islamist rule.

KABUL, AFGHANISTAN -- AUGUST 15, 2021: Pedestrians, motorists ended up in a traffic grid lock as the Afghans rush to safety with the uncertainty and rumor swirling that Taliban enter the city and take over, Kabul, Afghanistan, Sunday, Aug. 15, 2021. (MARCUS YAM / LOS ANGELES TIMES)

(TNS) KABUL, Afghanistan — Wrenching scenes unfolded Monday at Kabul’s airport as thousands of Afghans tried to flee the Taliban takeover of the country, clambering over barriers, thronging the tarmac and even clinging to the side of a U.S. military transport plane before falling off. At least seven people were reported to have died in the chaos.

The American military has taken control of the evacuation of diplomatic staff and allies, in a harrowing capstone on the two-decade U.S. military mission, but the deadly tumult left the airlift effort in crisis. The Taliban controls all land crossings out of the country, and for now, the capital’s airport is the only evacuation route.

Pentagon spokesman John Kirby confirmed that two “armed Afghans” were killed by U.S. forces in the vicinity of the airport, and he said he was evaluating reports that at least one American service member was wounded.

A day after the Taliban assumed control of the capital and President Ashraf Ghani fled the country, most people in the capital cowered in their homes, staying out of sight. In the early morning, normally traffic-choked streets were eerily empty as Taliban fighters, many clad in sandals and traditional shalwar kameez, wielded automatic weapons on the streets and in city squares.

The fighters displayed a disconcerting mix of menace and nonchalance. A young Taliban commander with bloodshot eyes and an oversize gold watch sternly waved off a request to take his picture, saying there was no permission for photographs. Then he smiled.

Near a United Nations compound in the city center, one fighter posed for a selfie in front of an armored vehicle. Others perched on plastic chairs in the scorching heat, eating breakfasts of Afghan bread, while a comrade casually balanced a rocket-propelled grenade launcher on two fingers.

At the city’s landmark Massoud circle, a short distance from the former headquarters of the U.S.-led military coalition, half a dozen Taliban fighters cradled American-made rifles. One was decked out in body armor and a helmet.

In public statements, the Taliban leadership put heavy emphasis on a law-and-order message.

“The situation in Kabul is under control,” Taliban spokesman Zabihullah Mujahid said in a Twitter post. People “involved in mischief” were being arrested, he said, and there were strict orders against looting or ransacking homes and businesses.

Everywhere in the Afghan capital, there were signs of residents’ keen awareness of the austere sensibilities of the newly arrived Taliban, who terrorized the population with harsh restrictions during their five-year rule that ended 20 years ago. The group adheres to a radical interpretation of Islam that bans the full participation of women in society, forbids the mixing of the sexes and frowns on education, music and other forms of art.

At neighborhood beauty salons, the usual gaudy images of women with elaborate coiffures and heavy makeup were removed or painted over. Cafes that had been known as hangouts for young people and couples were shuttered and deserted.

On the route to the airport, the sound of gunfire could be heard, and a massive traffic jam developed, with cars facing in every direction as some drivers tried to turn around and extricate themselves while others sought to plow forward. A hulking troop transport truck sat abandoned and apparently inoperable.

The airport was the site of the most dramatic scenes of uncertainty and fear in the wake of the Taliban’s seizure of Kabul, a city of about 6 million people. Afghans stampeded for spots on departing planes. The airport’s civilian operations were suspended, the AP reported, as the U.S. and its allies continued with their evacuation of diplomats and nationals.

Kirby said about 6,000 U.S. military personnel would be in Kabul by day’s end to continue that effort. He declined to comment on the reports and footage of Afghans hanging onto U.S. military aircraft taking off from the airport. “We are trying to make this as safe as possible,” he said.

He added that Gen. Kenneth McKenzie, the head of U.S. Central Command, which oversees operations in Afghanistan, had contacted Taliban leaders and warned them that any attack on U.S. assets would be met with a “forceful” response.

Away from the airport, Kabul city parks that had sheltered thousands of displaced people from the provinces were largely empty, and local people said families who had been sleeping in the open air had been told to go home.

In an incongruous assumption of normal police duties, Taliban fighters checked identification documents, inspected vehicles and conducted pat-downs. Many normally bustling public venues were shut tight, including the campus of Kabul University and a business center where many Afghans go to apply for visas.

But not everyone had yet given way to the anticipated change in the social order; in a Kabul district dominated by ethnic Hazara, a woman walked down the street wearing high heels. In earlier Taliban times, women could be publicly whipped for showing an ankle.

Others waited to take their cues from the conquerors. On Chicken Street, a thoroughfare popular with tourists and foreigners, some shop owners lingered outside their shuttered stores, waiting to see if a Taliban representative would give them permission to open their businesses.

The Taliban, too, seemed to be getting the lay of the land. Shop owner Mohammad Reza said that, a day earlier, Taliban fighters drove up and down a main street taking pictures and surveying the neighborhood — then drove off without doing anything further.

Reza said he planned to continue selling his wares of flags and ceremonial artifacts, if he can. Near his shop, a guard post that used to be manned by police was instead presided over by a Taliban fighter.

Reza, a married 25-year-old father of a 6-month-old baby, said he would leave if he could, but did not have the means.

At the United Nations, the Security Council met in emergency session to discuss the Afghan crisis. Secretary-General Antonio Guterres called on the Taliban to respect human rights and on the international community to “stand together, work together and act together” to protect the Afghan people.

The world, he said, “is following events in Afghanistan with a heavy heart and deep disquiet about what lies ahead.”