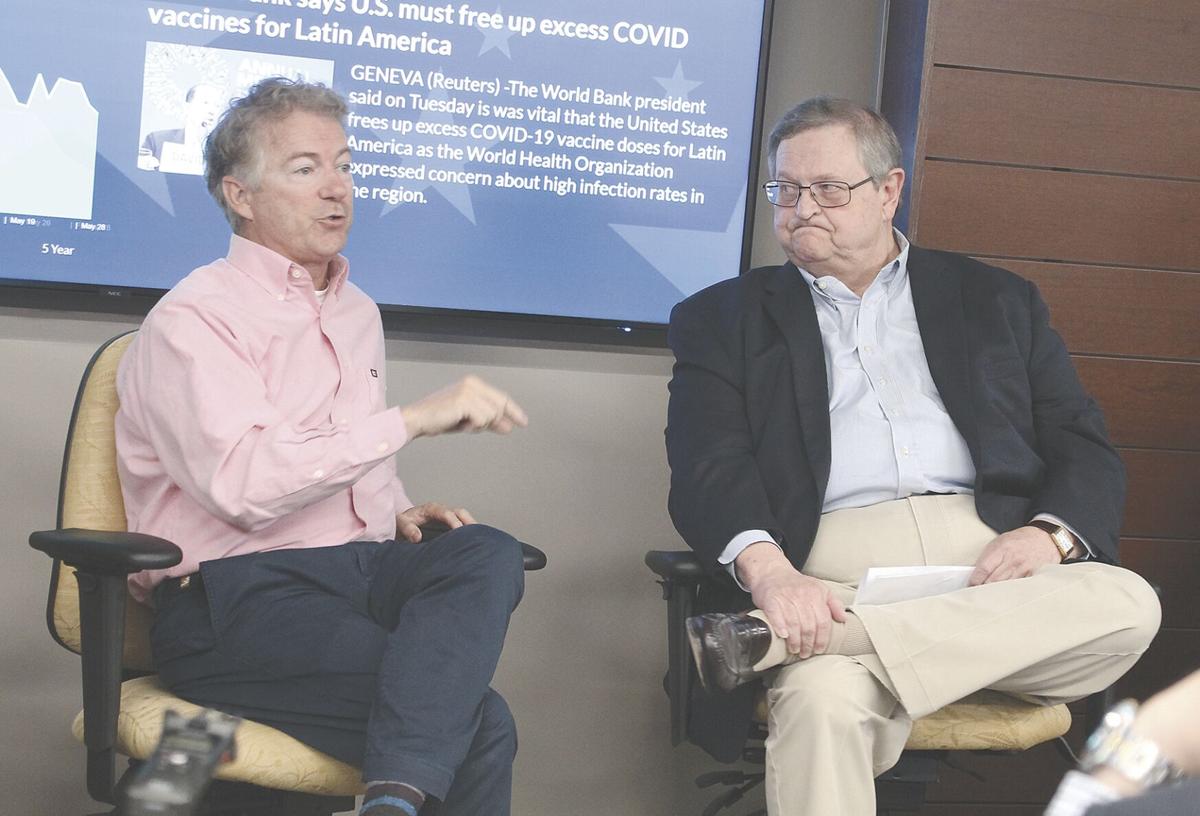 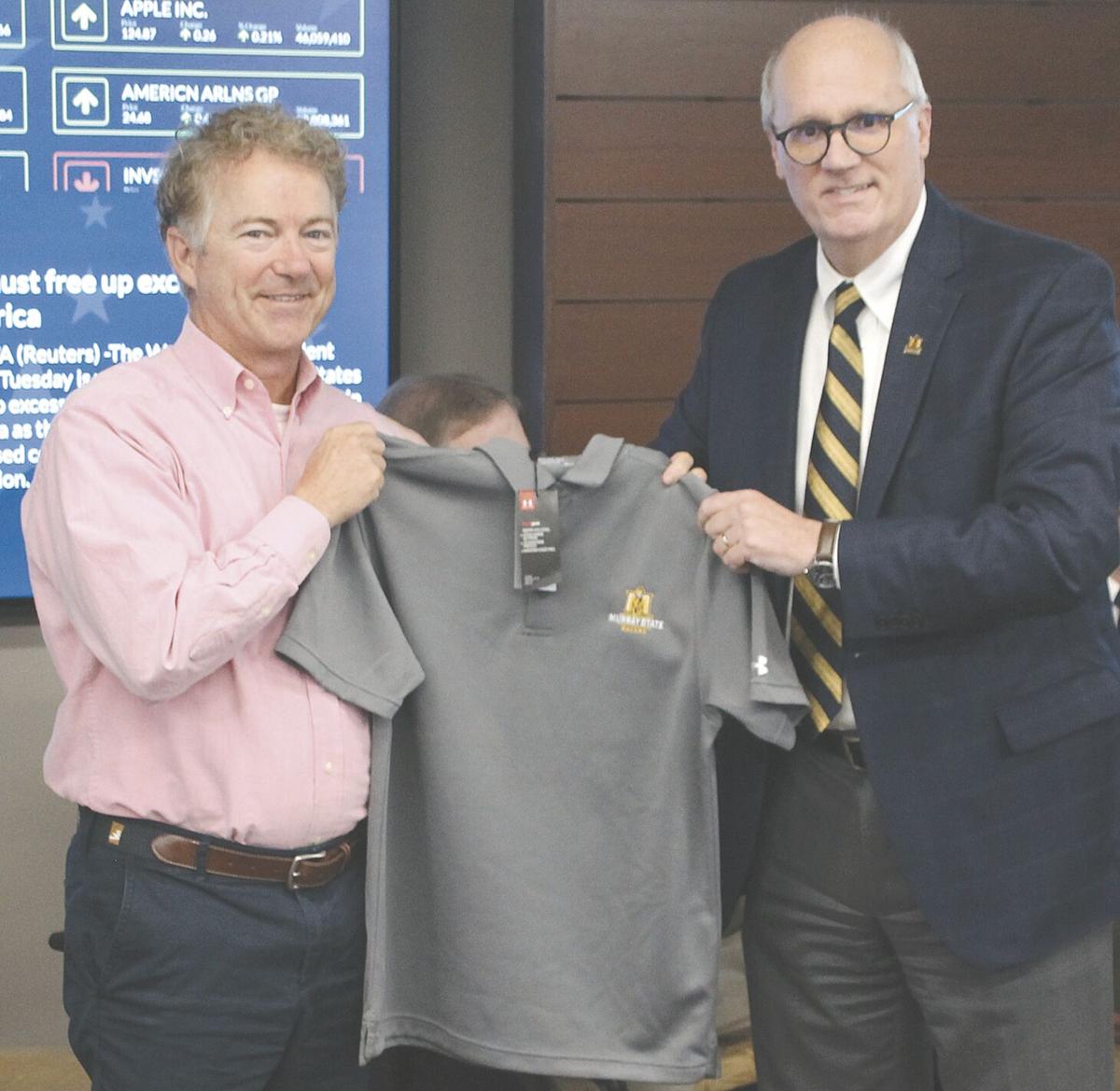 MURRAY – During a business roundtable Tuesday afternoon at Murray State University’s campus, U.S. Sen. Rand Paul said that in his view, the United States’ increasing deficit is partly a result of many elected officials having “big hearts” and “small brains.”

The business roundtable was held inside Murray State’s Arthur J. Bauernfeind College of Business building with several local business and industry leaders, as well as invited guests in the audience. In addition to the senator, the panel discussion also included Murray-Calloway County Chamber of Commerce President/CEO Michelle Bundren, Murray-Calloway County Economic Development Corporation President Mark Manning, Interim College of Business Dean David Eaton and Chris Wooldridge, director of the Center for Economics and Entrepreneurial Development at Murray State. In his introduction, Murray State President Bob Jackson noted several of the committees on which Paul serves, including being a ranking member of the U.S. Committee on Small Business.

A large portion of the discussion centered around inflation and reports of employers having difficulty hiring, which many business leaders and Paul have blamed on Americans continuing to collect unemployment payments many months after losing their jobs because of the COVID-19 pandemic. Wooldridge said that line of thinking was backed up by a regional survey the Center for Economics and Entrepreneurial Development conducted in which respondents suggested discussing the idea that “unemployment payments are encouraging employment avoidance.”

“I think if you pay people more not to work than they would get for working, guess which one they’ll choose. And that’s a problem,” Paul said. “In Washington, I call it the ‘Big Hearts/Small Brains Syndrome.’ They all have big hearts, and so do I. I don’t like to see people suffer, and I wish I could help them, but if you give people $50,000 a year not to work, nobody making less than $50,000 a year will work. So we did that for a year, and now it’s down to about $35,000, but there are still a lot of jobs that need to be done that aren’t going to pay $35,000, particularly when you start.

“Everywhere I go, that’s the main question I’m getting from employers. They want to hire people and can’t find them. So there are real problems, and the government shouldn’t be involved in it. Having an unemployment insurance program, even though I’m a small government guy, I can deal with that. You pay a certain amount of tax, there is an unemployment program, it’s paid for for about 26 weeks, and it’s not very generous – not because we’re not a generous people, but because we don’t want people not to work. It’s supposed to get you by for a short period of time.”

Paul said work is critical not only to the economy at large, but also to individual self-esteem. He said that no matter what your job is, he thought it was important that people be able to take pride in a job done well. He added that studies on unemployment during the last recession showed that people are less likely to get hired for their next job the longer they are out of work.

Paul also discussed recent rises in prices and fears that they might be indicative of inflation. He said he believed the trillions of dollars that have been pumped into the economy after the passage of the American Rescue Plan Act, as well as other government programs like unemployment insurance, are partially to blame. According to the Associated Press, some economists believe prices for many items are rising because the economy is rebounding after a long period of business shutdowns caused by the COVID-19 pandemic, leading to large increases in demand. Another reason they have cited is a shortage of raw materials such as lumber and copper, which could have also been caused by companies being unprepared by the speed of the economic recovery, with consumers spending multiple stimulus checks received over the last year.

Paul noted that some economists believe that the recent inflation is transitory and will go back down once some of these problems naturally sort themselves out, and he said he hoped that was the case, but he was also worried that the problem might be deeper than that.

“You know, the disease in Washington is a spending one, so it takes a lot for them to become at all concerned, but I can start to see some worry in the faces (of fellow lawmakers),” he said. “Typically when I characterize the two different political parties, as I said on the (Senate) floor, Democrats don’t give a fig about the deficit. They just don’t. They want to spend, spend, spend. Republicans pretend to give a fig about the deficit, and maybe about half of them or a third of them actually do. The vast majority of Washington, between both parties, just spends. But even those people, when you look at them, are starting to worry about how much has occurred.”

Eaton said whether or not rises in prices turn out to be a long-term crisis will depend on whether they are truly an inflation problem or a temporary supply chain problem. He said that among those who believe inflation will not be permanent, the theory is that the backlog will eventually go away and things settle back down and prices will drop back down.

“The Fed and a lot of people on TV are saying it’s going to be transitory, and I think that’s a real question,” Paul said. “Are they apologizing for the system and trying to say, ‘Don’t look here, it’s not going to happen” or is it really going to happen? And I don’t know if I know the answer, but I worry that it’s not transitory.”

Paul also talked about his desire to definitely learn the origins of COVID-19. He said that although he didn’t know whether the virus had been passed from animals to humans or whether it had been created in a laboratory as part of a medical study, he hoped the U.S. would get to the bottom of it. Although partisans on the left and right have mostly stuck to their respective camps, he said he was pleased that more people were starting to be less dismissive of the idea that the virus might have leaked from the Wuhan Institute of Virology in the capital city of China’s Hubei province.

“This week, there’s been a sea change in Washington,” Paul said. “Six months ago, everybody said you were a complete crazy, tin foil-wearing conspiracy theorist if you thought it might have come from a lab. Now almost more than half the people pretty much believe it came from the lab. I can’t tell you for certain it did, but the fact that three workers in the lab were in the hospital with COVID-like symptoms in November of 2019 – when the Chinese government was telling us it didn’t come out until December or January – makes me wonder.

“But one of the strongest pieces of evidence is there were two other coronaviruses – SARS and MERS. MERS had 50% mortality (when discovered in 2012), and SARS had 15% mortality and came out in 2004. In both of those, within a year they found the animal that it came from. Do you remember how everybody said (COVID-19) came from the wet market? Well, they tested thousands of animals from the wet market and they haven’t found one with COVID.

“Then they said most coronaviruses come from bats, so they took COVID-19 and they tried to infect bats, but bats don’t readily accept it either. It turns out the best-suited host for COVID-19 are humans. So how did we get an animal virus that’s most suited for us? Could it have been natural? Maybe. But you can also force this kind of accelerated natural selection in the lab, and I think that may have been what happened.”

Paul – who was the first known senator to contract COVID-19 in March 2020 – said the reason he cares about this issue so much is not only because he recently got an amendment passed that would permanently ban U.S. funding of this type of research in China, but he also worries about “gain-of-function” research in the U.S. He said there are 11 U.S. labs that are mutating viruses from animals to see how they spread to humans, which he called a “death wish.”