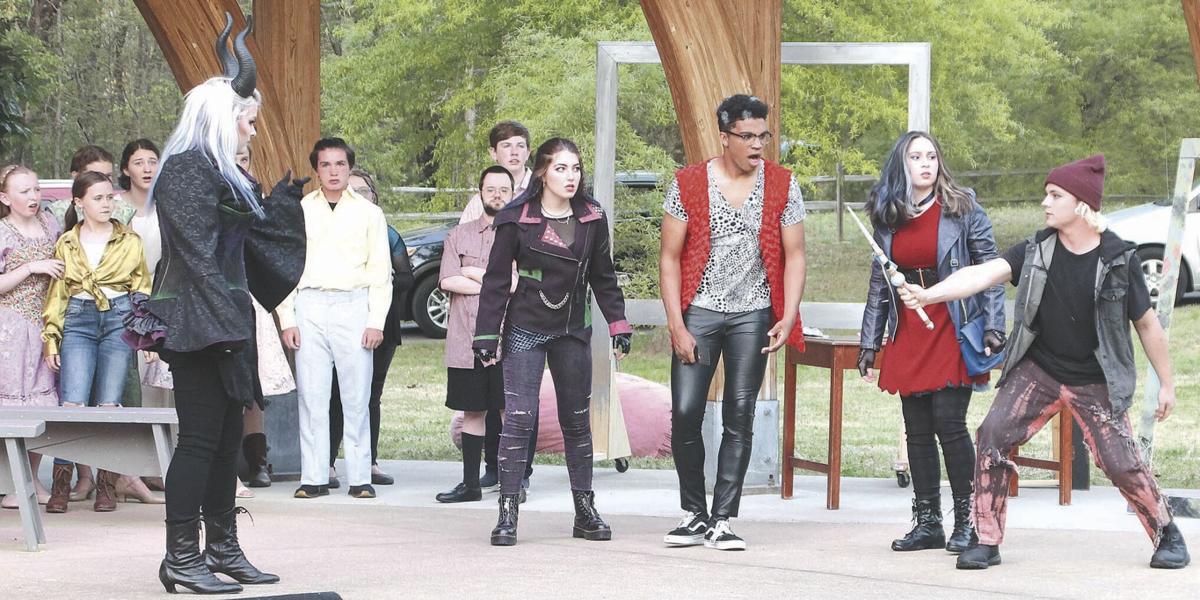 Caleb Yale, right, as Jay, threatens Mallory Walls as Maleficent, far left, with the Fairy Godmother's magic wand, in a scene from Playhouse in the Park's production of "Disney's Descendants: The Musical." The show starts Thursday at the Rotary Club of Murray Amiphitheater and Performing Arts Pavilion in Murray-Calloway County Central Park. Also pictured, second from left, are Skylar Swalls as Mal, Dylan Covington as Carlos and Lucy Mitchell as Evie. 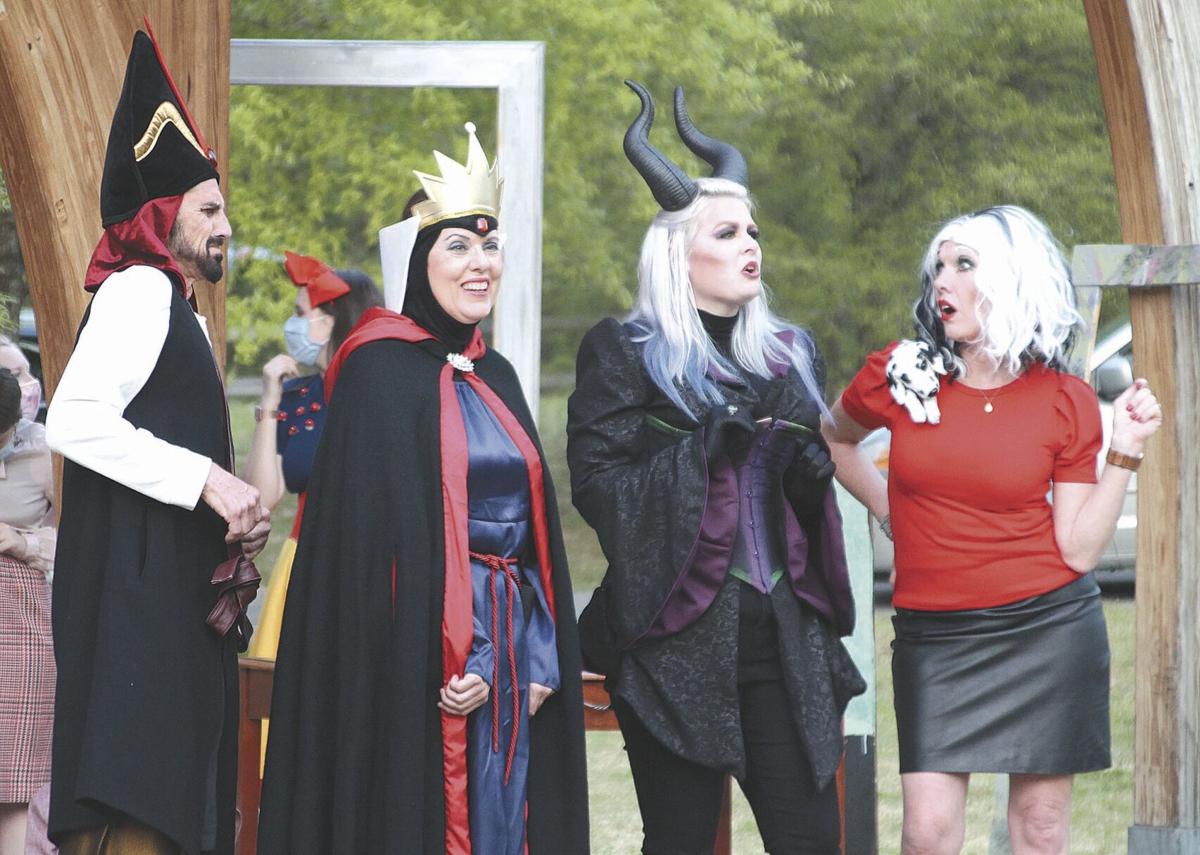 Disney villain parents are pictured in a scene from "Disneys Descendants: The Musical." Pictured, from left, are Scott Swalls as Jafar from "Aladdin," Carolyn Winchester at the Evil Queen from "Snow White," Mallory Walls as Maleficent from "Sleeping Beauty" and Kelly Bolls Mackey as Cruella de Vil from "101 Dalmations."

Caleb Yale, right, as Jay, threatens Mallory Walls as Maleficent, far left, with the Fairy Godmother's magic wand, in a scene from Playhouse in the Park's production of "Disney's Descendants: The Musical." The show starts Thursday at the Rotary Club of Murray Amiphitheater and Performing Arts Pavilion in Murray-Calloway County Central Park. Also pictured, second from left, are Skylar Swalls as Mal, Dylan Covington as Carlos and Lucy Mitchell as Evie.

Disney villain parents are pictured in a scene from "Disneys Descendants: The Musical." Pictured, from left, are Scott Swalls as Jafar from "Aladdin," Carolyn Winchester at the Evil Queen from "Snow White," Mallory Walls as Maleficent from "Sleeping Beauty" and Kelly Bolls Mackey as Cruella de Vil from "101 Dalmations."

MURRAY – For the first time since Halloween, Playhouse in the Park is presenting an outdoor musical play, starting Thursday and continuing through next weekend.

Featuring a large cast of local children, teens and adults, “Disney’s Descendants: The Musical” is based on the 2015 Disney Channel Original Movie that was popular enough to launch a spinoff animated series and sequels in 2017 and 2019. It will be presented in the Rotary Club of Murray Amphitheater and Performing Arts Pavilion in Murray-Calloway County Central Park.

“It is present-day, and in the kingdom of Auradon, all of Disney’s beloved heroes and royalty are living happily ever after, safe from the terrifying villains and troublesome sidekicks they have banished to the magic-free Isle of the Lost,” the synopsis on the Playhouse website says. “That is until Ben, the benevolent teenage son of Belle and King Adam, offers a chance of redemption for the troublemaking offspring of the evilest villains. Mal, Evie, Jay and Carlos – the children of Maleficent, the Evil Queen, Cruella de Vil and Jafar – have a difficult choice to make: should they follow in their parents’ wicked footsteps or learn to be good?”

Earlier this month, Playhouse presented the musical variety show “8-Track: The Sounds of the ‘70s” at the Barn at White Oaks and on the Playhouse deck, but “Descendants” will be the first full-fledged production with a story its performers have done since last fall. After the success of the musical adaptation of Roald Dahl’s “Matilda” in February 2020, COVID-19 forced the theater to close and cancel the rest of the shows it had planned for the season. The organization finally was able to schedule some other shows at the amphitheater during the fall, with the final performance being “The Legend of Sleepy Hollow” on Halloween night. They had planned a rescheduled performance of an earlier play that had been rained out, but it had to be canceled because of the rising number of coronavirus cases at the beginning of November.

“Descendants” is being directed by Playhouse Executive Director Lisa Cope and Corrie Johnson, and Johnson said this is her first time stage managing and assistant directing. She said that when she heard the Playhouse was doing this show, she told Cope she would do whatever was needed.

“I jumped right in with stage managing at first, and then she asked me to assistant direct, (and I’m hoping) to also direct on my own at Playhouse in the future,” Johnson said. “I have five daughters, and the younger four are obsessed with ‘Descendants,’ and I’ve always loved being involved with the Playhouse, but after 2020, it’s so nice to have something to look forward to again and have something that gives you a quasi sense of normal. So my girls planned immediately to audition and I let (Cope) know I’m here to help.

“It’s a fun show; it’s vibrant, it’s very dynamic, both visually and musically, and the choreography is absolutely stunning and very engaging to watch.”

Most of the main characters are the children of the villains from classic Walt Disney animated films, and Mal – daughter of Maleficent from 1959’s “Sleeping Beauty” – is at the center of the action. Mal is being played by 17-year-old Skylar Swalls, who has been acting at Playhouse since the age of 5 when she began attending the summer camps for kids. Over the years, she has appeared in many Playhouse productions, and her father, Scott, has supported her and volunteered behind the scenes. He has acted on occasion, such as in 2014 when he played Mr. Arable in “Charlotte’s Web” while Skylar played Wilbur the pig. Although he doesn’t typically audition for shows, he was determined to be in this show with his daughter. He is playing the role of Jafar from 1992’s “Aladdin.”

“I got sick last summer; I was diagnosed with cancer, and it put a lot of things in perspective,” he said. “I went through chemo and radiation and a couple of surgeries. I’m OK now and it’s gone, but it made me want to spend more time with Skylar and make memories. Memories are important. She came home and said, ‘Dad, Playhouse is back!’ she was so excited.

“Since I follow Lisa (on Facebook), I knew the day before that Lisa had said they were coming back with ‘Descendants.’ I had never heard of it and didn’t know what it was, but Skylar said, ‘You should audition.’ I said, ‘I was going to ask you if you thought I should, but I didn’t know if there were any adult roles’ She texted Lisa right then and Lisa said, ‘Yeah, do it!’”

Scott said he almost got cold feet when he realized how much singing and dancing was in the show because not only did he have no experience with that type of performing, but his throat and mouth still feel burnt from the radiation. He ultimately decided that spending time with his daughter was more important than his nervousness, so decided to do it anyway.

Skylar said she has a lot of friends who get embarrassed when their parents are heavily involved in their activities, but she loves having her dad around and the whole cast also enjoys his company. She said they have been in rehearsals since January.

Skylar said she was very familiar with ‘Descendants’ and watched it when it first aired on the Disney Channel six years ago. She said she strongly relates to the character of Mal.

“I hate to be like, ‘Oh, I’m not like other girls,’” Skylar said, rolling her eyes. “But I do feel sometimes that I’m not like other teenagers; I just feel a little bit different. So this is great because Mal is super different (from a lot of her peers) too. And this is one of my favorite Disney movies. I love this entire franchise; I think it’s great. … This is so up my alley, and I feel like I was born for this role.”