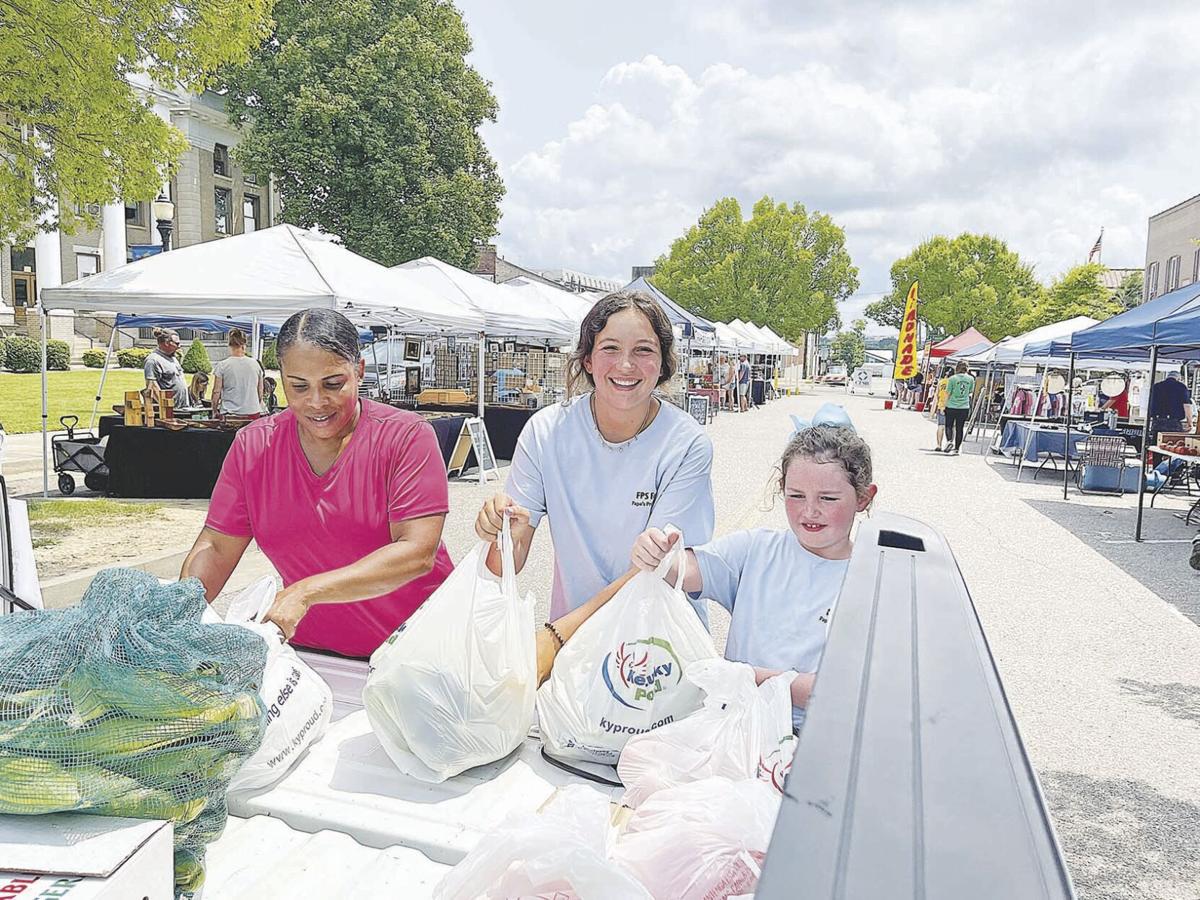 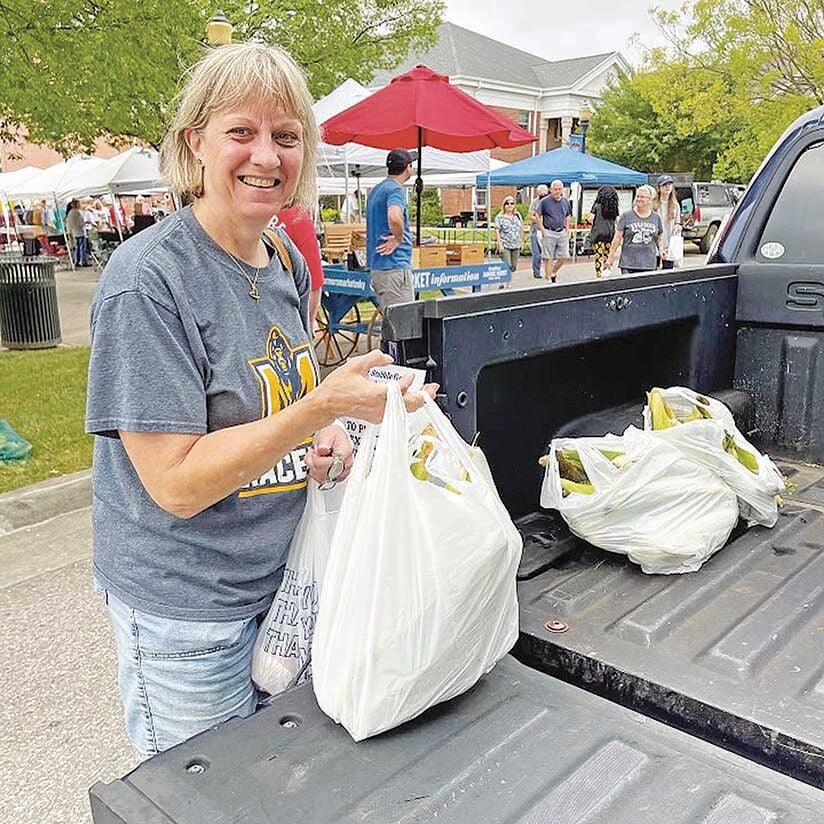 Liz Lollar of Murray was happy to donate a portion of her purchases Saturday morning at the Downtown Farmers Market to the eighth annual Krit Stubblefield Stuff the Truck activity to benefit the Murray-Calloway County Need Line.

Liz Lollar of Murray was happy to donate a portion of her purchases Saturday morning at the Downtown Farmers Market to the eighth annual Krit Stubblefield Stuff the Truck activity to benefit the Murray-Calloway County Need Line.

MURRAY — The forecast was anything but positive for Saturday in the Murray area.

“Chance of precipitation … 90%,” read the text from the National Weather Service Office in Paducah. For Murray Main Street Executive Director Deana Wright, this obviously was bad news, being that the eighth annual Krit Stubblefield Stuff the Truck activity to benefit the Murray-Calloway County Need Line was quickly approaching, and that rain would almost certainly hurt contributions.

Then came Saturday … and a big surprise.

“Oh man, was I happy!” Wright said, recalling how the rains were nowhere to be found when 7 a.m. arrived on Saturday, the opening time of the weekly Downtown Farmers Market that serves as the generator of the massive haul for Need Line each year, with both shoppers and vendors contributing to the amount. “It was a beautiful day, in fact, and it wasn’t too hot. It was a great day for stuff to be happening.

“I had been so afraid that it was going to rain, but when it turned out that it didn’t, we had vendors who had said that they probably weren’t coming, all of a sudden, they’re texting and telling me, ‘Yeah! I’ll be there!’

That goes double for Need Line Executive Director Tonia Casey, whose agency has benefited from this activity ever since former market vendor association spokesman Krit Stubblefield, who died in 2017, told her he was thinking of hatching an idea for a Need Line food drive through the market. On average, Stuff the Truck produces about 300 pounds of food each year.

“Krit was the one that called and asked me what I thought about it, and I said, ‘Krit, I think it’s wonderful,’” Casey recalled. “And I kept thinking about the ones we have (as clients) who live in apartments and could not have a garden, and I said, ‘Krit, they really miss it,’ and Krit said, ‘Well, I love Need Line and I love the way that you help people out and  try to help people get the stuff that they need. I’m going to push for it … really push for it.’”

The result is a commodity that Need Line is not able to offer to its client base — fresh produce.

“It puts a lot of smiles on people’s faces and it really tickles me,” she said. “A lot of times, we have older people that come to us who always did have a garden (before moving to apartments, other dwellings) and they say how much they’ve missed being able to have food out of their gardens. So it’s a good feeling to see this. It’s such a positive feeling.

“I wasn’t able to be (at the Need Line office Saturday when Wright drove the truck into its delivery area), but I talked to my people that (went to the market), and we had four there who helped out. They said they were getting everything from green beans to pies to bread to watermelons. Pretty much, you name it, the back of that truck was packed.

“Oh it made me happy alright! Fresh produce and bread makes such a difference in the lives of our families who can’t really afford it.”

The truckload of food is made possible by the generosity of market customers who buy an extra amount just for the cause that goes along with their regular purchases. At the end of the day, vendors also contribute to the pile by donating some of the items they have remaining from the day’s sales. Wright also said Main Street personnel take cash donations in which donors ask that their money be used to purchase additional items for the drive.

She also said she cannot help but notice that children have a way of getting involved in this cause.

“If they’re with their parents, many times, you’ll see them let the kids put the bag of food they just bought for the truck onto the truck. We also have many children who come with their parents who are vendors and you’ll see them put what the family is donating at the end of the day on the truck,” she said. “It’s really kind of cool and it gets the whole family involved, plus it teaches them about giving in the community.”

And with Need Line now serving more than 1,000 people a month, Casey said there is no way to measure the importance of an activity such as this one.

“Calloway County just excels in everything they do and this is just one of the many examples of caring and giving,” she said.