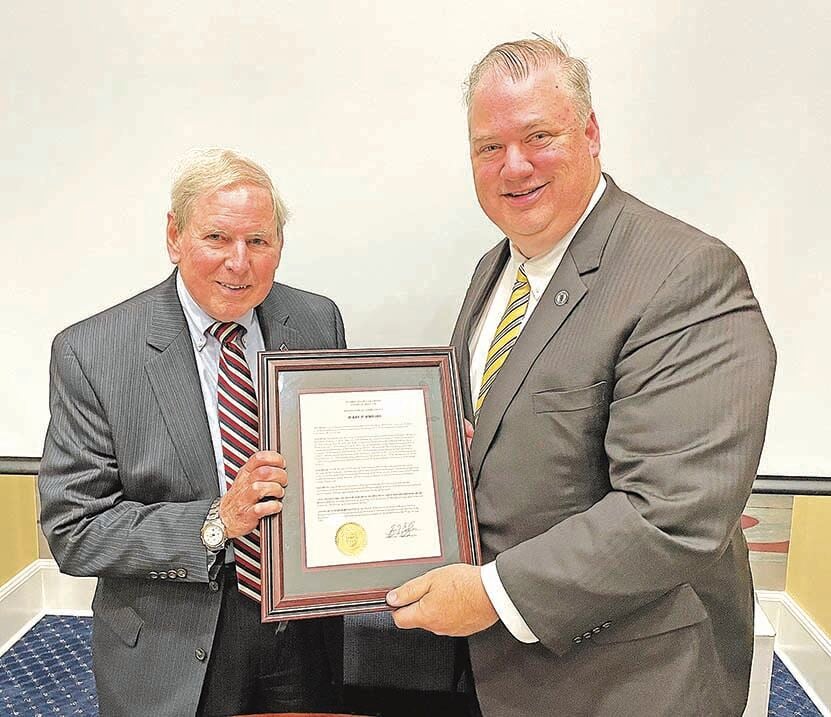 Outgoing Murray State University Board of Regents Chairman Jerry Rhoads, left, receives a framed version of a resolution in his honor from Regents Vice Chairman Eric Crigler Friday afternoon. Rhoads served his final meeting with the board and will leave after six years. 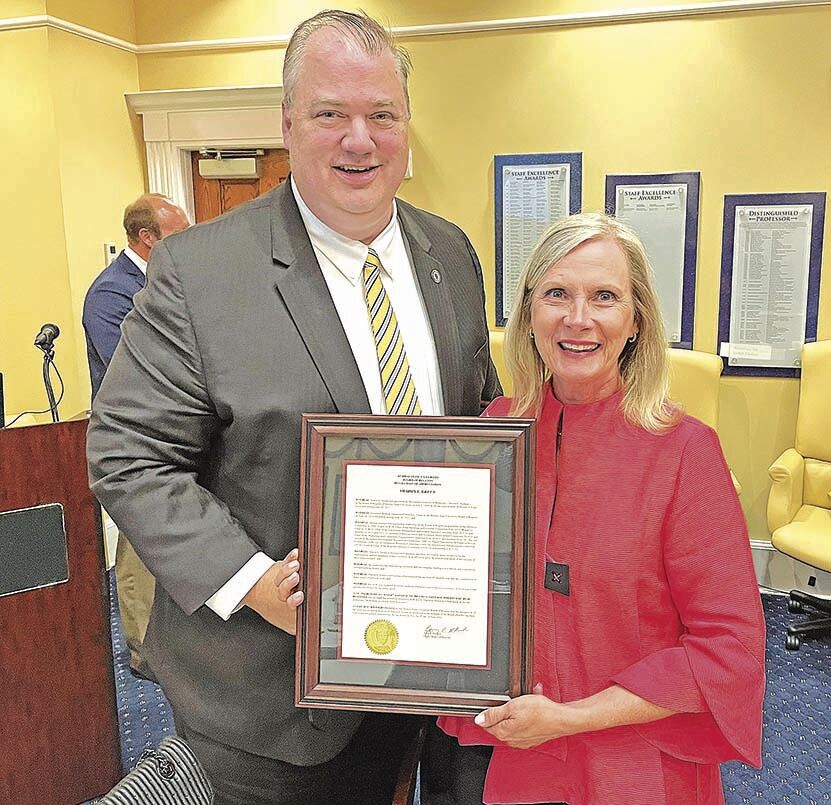 Murray State University Board of Regents Vice Chairman Eric Crigler, left, and outgoing Regent Sharon Green pose Friday afternoon with a framed copy of a resolution presented to Green during her final meeting with the board. Green is leaving after 12 years as a Regent.

Outgoing Murray State University Board of Regents Chairman Jerry Rhoads, left, receives a framed version of a resolution in his honor from Regents Vice Chairman Eric Crigler Friday afternoon. Rhoads served his final meeting with the board and will leave after six years.

Murray State University Board of Regents Vice Chairman Eric Crigler, left, and outgoing Regent Sharon Green pose Friday afternoon with a framed copy of a resolution presented to Green during her final meeting with the board. Green is leaving after 12 years as a Regent.

MURRAY — Murray State University alumni Jerry Rhoads and Sharon Green have been on the front lines to face some of their alma mater’s most challenging times as members of the university’s Board of Regents.

However, particularly in the past three or four years, they have been part of important positives too, including turnarounds in enrollment, the university’s financial situation and, most recently, their alma mater’s emergence from the COVID-19 pandemic. And so, it is now that both of their terms on the board must come to an  end.

Their terms expiring, Rhoads, the board’s chairman the past year and a six-year member of the body, and Green, a Regent the past 12 years, both said goodbye Friday afternoon at the end of what will be their final meeting with the board.

“During my six years, we have really had outstanding leadership with our chairs and committee chairs and we’ve been through some tough times,” Rhoads said at the close of the Regents’ first in-person meeting since the pandemic began last year. “Look at where we are now, compared to where we were. It’s like night and day where are and how far we have come. I sincerely believe the best days of Murray State University are ahead. We’re headed in the right direction.”

Green said she had been fighting back tears all day inside Heritage Hall’s Hall of Benefactors, featuring a massive photographic display of Lovett Auditorium, taken from the area known as The Quad. She said that began stirring memories of how that view became routine for her as a student in the days she met her husband, Jeff, who, like Rhoads, became a state senator of the Kentucky General Assembly. He died in 1997.

It was when incoming Regent Chairman Eric Crigler read the final words of a resolution honoring her service, the words of “our last milestone … ‘well done good and faithful servant’ …” that her emotions finally flowed.

“Some of you know that I got engaged in Pogue Library,” Green said, tearfully. “The other day, my granddaughter and I were discussing ages and she looked at me, and asked ‘Who started this family?’ Today, I was looking at (the picture). It was Murray State University that, in essence, started this family.”

“Warren was an excellent student body president and an excellent student regent and it was unfortunate that he didn’t get to serve at a normal period of time,” Jackson said of how Norman was saddled with “the toughest (Student Government Association) presidency of anyone since World War II. “He was really concerned about not being here today. Watch the news. You’ll read about Warren Norman in years to come. He’s a fine young man and I know he’s going to do great things.”

Rhoads said that the June meeting is the most important one annually because there are two things that come from it. The evaluation of the president’s performance and the approval of the budget for the upcoming fiscal year.

Both were accomplished Friday with unanimous votes of the Regents. For Jackson, who was officially installed as the university’s 14th president in March 2019 after being named interim president during August 2018, Friday’s approval meant a one-year contract extension. That contract now runs through June 2025.

“I want to thank you for all of the support and confidence you have shown in me,” Jackson said, adding that, while he ultimately emerged with unanimous approval, the process was not easy. “It is the most comprehensive evaluation I’ve been given in my professional career (which also included a state senator’s stint). Just for the record, I appreciate that.

Vice President of Finance and Administrative Services Jackie Dudley indicated that same team philosophy was in place for the budget.

“We have worked on this for a number of months. We actually started working on it before the Christmas break and it took nearly everybody on this campus to put it together,” Dudley said of the budget, which increased by $3.4 million this year between the education, general and auxiliaries funds. She also said that a new approach to determining tuition revenue — using current numbers instead of projected numbers — results in more certain figures.

Once again, the budget features a $2 million contingency that has come into play lately, particularly for additional cushion during the pandemic.

The budget is also taking advantage of action from the General Assembly this year in regard to the ongoing state pension crisis. While Murray State’s pension liability with the Kentucky Retirement System is going from 49% to 90%, an $8 million hit, that impact will not be as severe because the state will pay $2 million of that. There will be no increase in liability until next year and that 90% figure will be in effect for 30 years.

Jackson, however, noted that the university has managed to rid itself of $25 million of debt in the past five years, which explains why it is now in position to pursue $12.3 million in bonds for several deferred maintenance projects that will result in major upgrades to some of the campus’ oldest buildings.