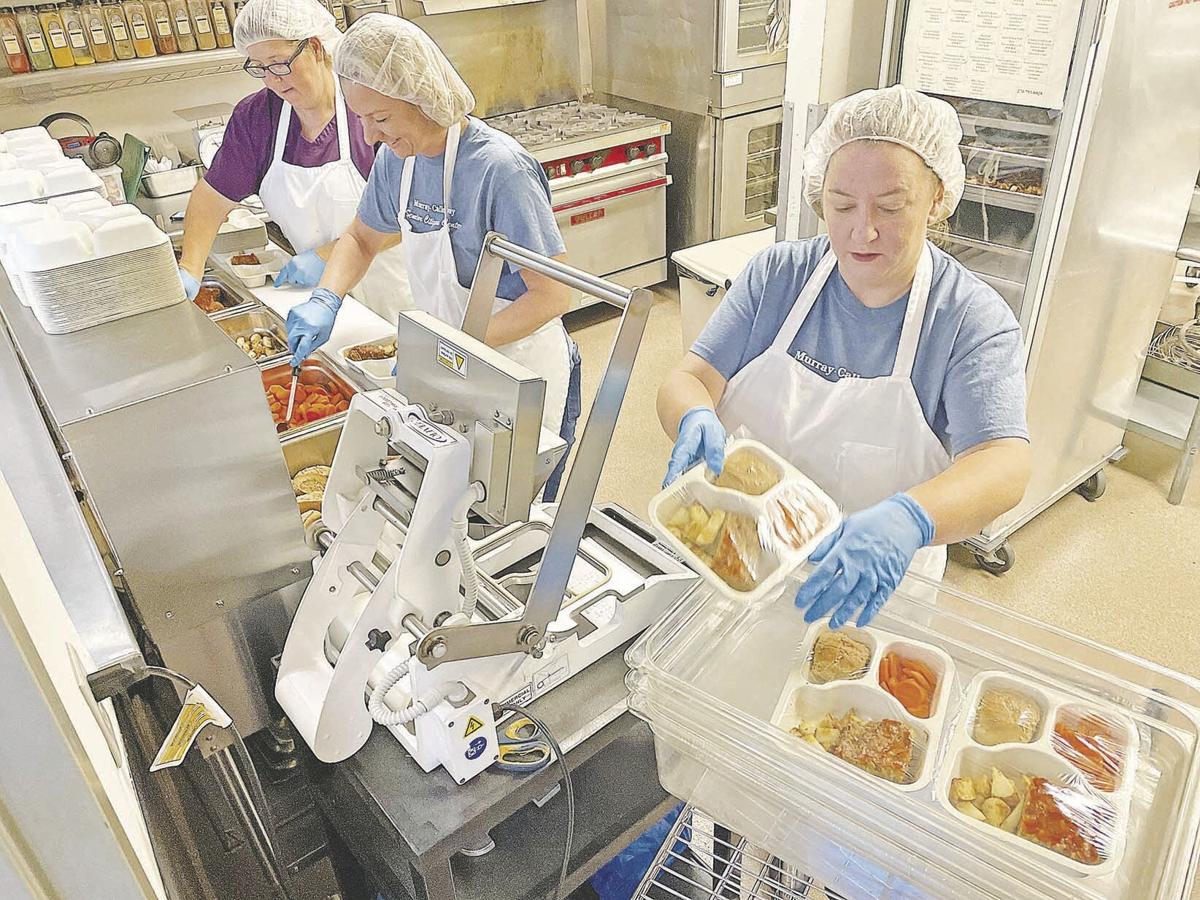 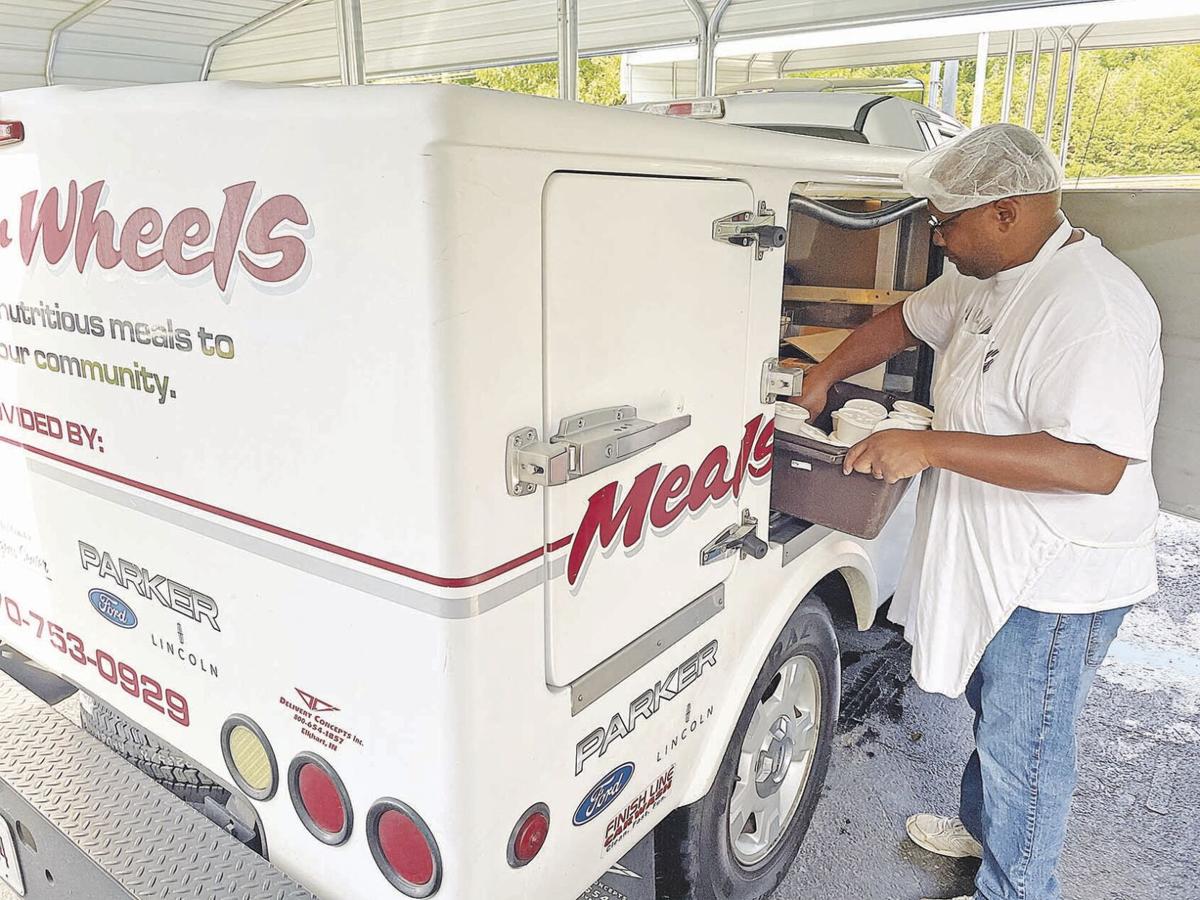 Rodney Covington loads one of the Murray-Calloway County Senior Citizens Center's Meals on Wheels vehicles with food items Thursday morning outside of the George Weaks Community Center in Murray. The Meals on Wheels program has continued during the COVID0-19 pandemic, growing its delivery numbers in the process.

Rodney Covington loads one of the Murray-Calloway County Senior Citizens Center's Meals on Wheels vehicles with food items Thursday morning outside of the George Weaks Community Center in Murray. The Meals on Wheels program has continued during the COVID0-19 pandemic, growing its delivery numbers in the process.

Most make their passes and leave. There have been times, though, that he has been able to speak with the occupants, and they have had the same question — “When will the Murray-Calloway County Senior Citizens Center open again?”

That was why he was smiling so much Thursday morning. He had an answer. The center, where he serves as executive director, reopens on June 14.

“We’re pretty excited,” McLemore said as he sat at the computer of his office inside the Weaks Center. Just seconds earlier, an email from the Kentucky Department of Aging and Independent Living gave the go-ahead for the opening date.

“Monday, June 14, will be the first time in literally 15 months that we’ve served people here. This has really been a remarkable ride and the experiences we have had over the last 15 months have been really challenging, but they also have been really rewarding.”

While the crowd of seniors who regularly visit the facility has been missing because of the COVID-19 pandemic, the center has still been operating at a high level. This has involved the Meals on Wheels service the center provides and something McLemore said became a lifeline for many seniors in Calloway County, as well as within  the Murray city limits.

“From the 16th of March in 2020 until this morning, we have served 53,813 meals. That’s a lot of food we’ve provided from one end of this county to the other, as well as in the city of Murray, and it’s been remarkable,” McLemore said, immediately focusing on the people most responsible for this train continuing to roll.

“This staff is one of the most special groups of people I have ever served with. They are servant ministers because they want to be here. They haven’t missed a day.

“When the opportunity came for the (COVID-19) vaccine to be available, they were first in line to get theirs because they knew they were going to be protecting the people they serve. We’ve done some things that have not been accomplished in a lot of other places.”

McLemore said he expects the Meals on Wheels program to continue serving more clients than it had before the pandemic. As eight volunteers prepared to leave the Weaks Center Thursday morning with the day’s meals — featuring the center’s most popular commodity, meat loaf — he said 226 seniors would be receiving meals. Before the pandemic, Meals on Wheels utilized four vehicles.

“And we don’t have a waiting list. You need a meal, we’ll get it to you,” he said, estimating that Meals on Wheels will probably experience a gain of 50 to 60 clients from pre-pandemic numbers. “Not all of those people are going to be coming to the center and getting meals that way, so we’ve got people that we have identified as needing additional support. It’s a hardship for them (to leave home).”

As for how things will look on June 14, McLemore said there will be adjustments. He said the dining room will probably operate at 75% capacity and activities, like playing cards and putting together puzzles, may have to be discontinued for a while.

However, he and his staff only care about one thing — having their people back.

“We want to see them!” said Nan Durham, the center’s nutrition coordinator. “I’ve been here the past 14 months now (supervising the preparation of the meals sent out of the center) and the last year has definitely been different. But what has really been the blessing is that anyone who needed a meal, got one. We have had such support from this community.

Two people that McLemore contacted upon receiving the go-ahead to re-open the center on Thursday were Calloway County Judge-Executive Kenny Imes and City of Murray Mayor Bob Rogers. Both were elated.

“This is one of the greatest things I’ve heard about when it comes to things re-opening,” Imes said. “These people were used to seeing people they know, pretty much, every day. They’re social creatures and they’ve had to be isolated and that’s been very hard on them

“We have a reputation here for taking care of our retired people and the way Mark and his people have kept (Meals on Wheels) together has been outstanding.”

“These folks have really missed that center,” Rogers said. “They’re used to doing things like exercising and playing games together. I’ve actually been wondering myself as to when they’re going to re-open.

“It just means so much for their morale.”