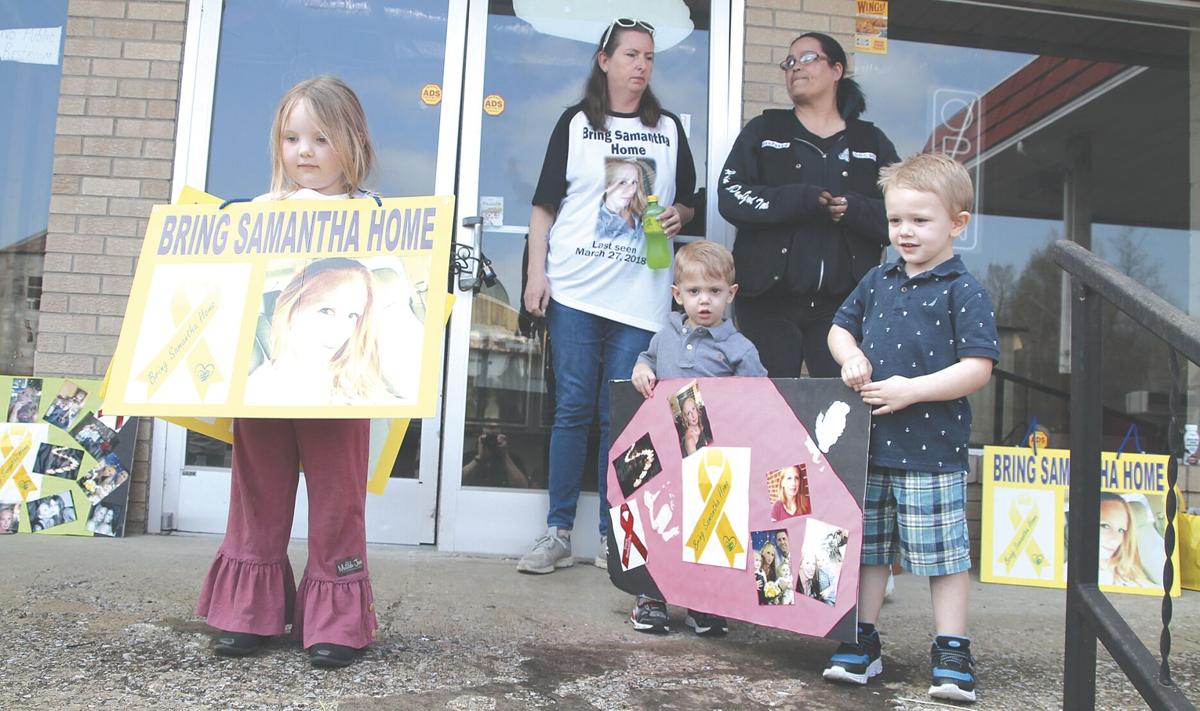 Children of family friends are seen holding signs at Saturday’s vigil to commemorate the third anniversary of when Murray resident Samantha Sperry was last seen in Graves County. Pictured, from left, are Abigail Thornton, 4, of Calvert City, and brothers Jayden Blair, 2, and Jaxton Blair, 4, of Paducah. Sperry’s mother, Tina Artis of Almo, rear left, talks to a friend behind them. 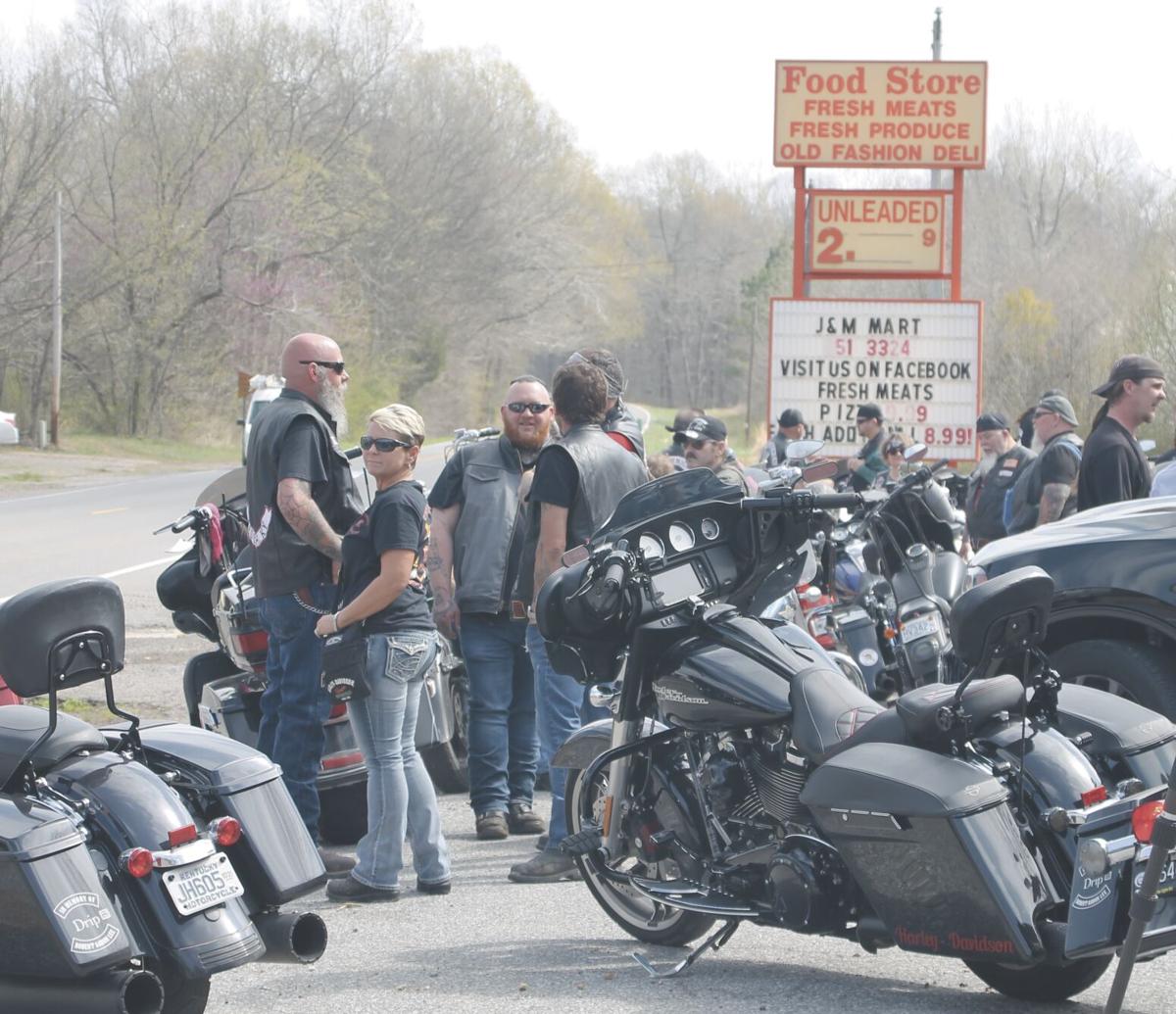 Members of several motorcycle riding clubs prepare to go for a drive down KY 131 in Graves County on Saturday to mark the third anniversary of Murray resident Samantha Sperry's disappearance.

Children of family friends are seen holding signs at Saturday’s vigil to commemorate the third anniversary of when Murray resident Samantha Sperry was last seen in Graves County. Pictured, from left, are Abigail Thornton, 4, of Calvert City, and brothers Jayden Blair, 2, and Jaxton Blair, 4, of Paducah. Sperry’s mother, Tina Artis of Almo, rear left, talks to a friend behind them.

Members of several motorcycle riding clubs prepare to go for a drive down KY 131 in Graves County on Saturday to mark the third anniversary of Murray resident Samantha Sperry's disappearance.

KALER — Three years after the unexplained disappearance of Murray resident Samantha Sperry in Graves County, family and friends are still begging anyone with information about what happened to come forward.

Graves County authorities were called on March 27, 2018, to a wooded area near the community of Kaler in the northern part of the county to search for Sperry, who was 25 at the time. According to Ledger & Times archives, she had been reported missing after a man had been found injured and suffering from hypothermia, apparently having spent the night in the woods after crashing an ATV that he and Sperry were riding. The man said he and Sperry had become separated.

A crowd gathered at the Old Kaler Store along KY 131 on Saturday, which marked the third anniversary of the day Sperry went missing. The Gold Ol’ Boys motorcycle riding club – of which Sperry’s stepfather, Toni Artis, is a member – and several other riding clubs rode down the highway in her honor after several family members spoke at the vigil.

Amanda Stevens of Symsonia, who is Sperry’s aunt, said the family held the event to remind the community that the case has still not been solved, and that to this day, no one has been charged in connection with Sperry’s disappearance.

“This highway is a very busy highway, and (gathering here) reminds people that she is still missing and that we are still searching for answers,” she said before the vigil started.

Sperry’s uncle, William Haynes of Hardin, said the last three years have been tough on everyone in the family, but they still hold out hope that will one day they will learn what happened to her and that someone will eventually be held accountable.

“Nothing’s ever developed and nothing’s come out (of the investigation),” Haynes said. “For us, it’s a never-ending process. There’s people that know what happened, and they’re either scared or they just don’t want to talk. With events like this, hopefully, they will come up and say something.”

Sperry’s brother, Tyler Cole of Possum Trot, said the family had held several fundraisers in the last three years to put together a $10,000 reward for anyone who reports any information to law enforcement that leads to the arrest and conviction of the person or persons who are responsible for Sperry’s disappearance.

“We’ve got a $10,000 reward, so we hope people will go to the cops and say something,” Cole said. “It’s just hard when you’ve got no answers and you know nothing.”

Samantha’s husband, Jacob Sperry, said they had two children together. They were also present at the event, and Jacob said as much as he hates the need to keep having events like Saturday’s vigil, he was touched by the strong turnout.

“As sad as this is, it’s a beautiful thing to see everyone here,” he said. “We just need somebody to be brave. We know that there is an answer out there, and we deserve it , and Sam deserves it. It’s just time for this to end. Don’t be afraid of these people (who might be responsible). We’re not. Come stand with us.”

During the vigil, Sperry’s mother, Tina Artis of Almo, she said she questioned the validity of one person’s account that Sperry had walked along KY 131 after they last saw each other.

“Nobody saw her. This is a busy highway,” she said. “In the time we’ve been here (for Saturday’s event), there’s been oodles of cars that have gone by. There’s no sidewalk, there’s no shoulder. If she was walking that way, someone would have seen her at 7:30 in the morning on a Tuesday. People going to work, people going to school.”

Artis said everyone makes mistakes in their lives, and she didn’t always agree with Sperry’s choices, but no one deserves whatever happened to her.

“When it’s all said and done, she was a good person,” Artis said. “She was a real good person with a good heart. Whatever happened to her, she did not deserve. Whatever happened to her, her kids did not deserve, Jake did not deserve. None of us deserve this. And what is so frustrating is the simple fact that we know there are at least one to two people ... that know exactly what happened, but they’re just too chicken to come forward for whatever reason. And they called Samantha ‘friend.’ They had the nerve to call her ‘friend,’ but they won’t come forward to say what they know. They would rather protect (whomever is responsible).”

During the vigil, Stevens said the family has begged and pleaded for anyone to come forward with information, but nothing has worked. She said she had faith that the people who know something will eventually talk, and that even if they don’t give the full story, what they say might turn out to be “the piece of the puzzle that unlocks everything else.” She said these people don’t need to worry that someone will find out that they gave information to law enforcement because people are arrested all the time based on anonymous tips, and it is rarely traced back to them.

“Three years is a ridiculous amount of time,” Stevens said. “There is no reason we should be three years out (with no one arrested). This community is small. Everyone knows everyone. So please, if you know anything, regardless of whether you know anything or not, just let the sheriff’s department know. It’s their job to decide whether or not it’s important.”

According to a flyer posted on the “BRING Samantha HOME” Facebook page, the Graves County Sheriff’s Office asks that anyone with any information call their office (270-247-4501) or West Kentucky Crimestoppers at 270-443-TELL (270-443-8355). People may also text tips to West Kentucky Crimestoppers at 847411 or email GCSO at sperrytips@gravescountyky.gov.