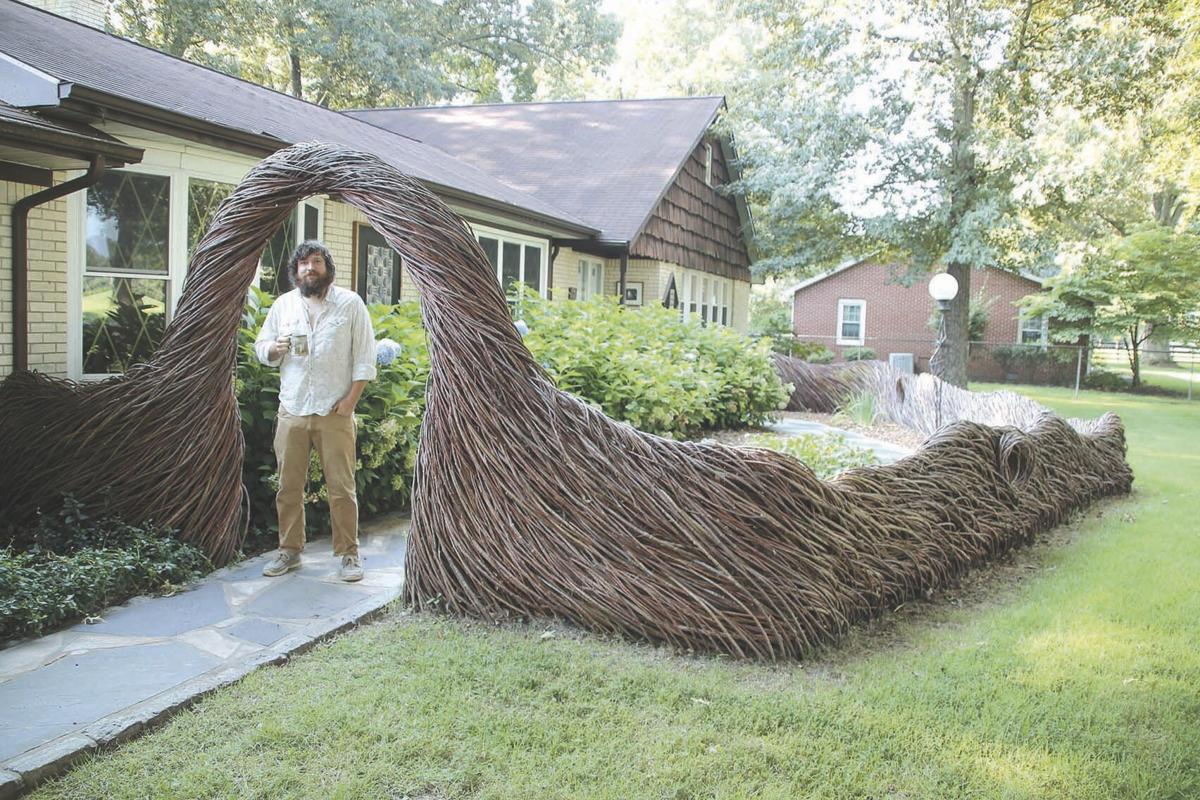 Artist Justin Roberts proudly stands beneath the arch of the long willow fence he recently completed on Robertson Road after two years of work. 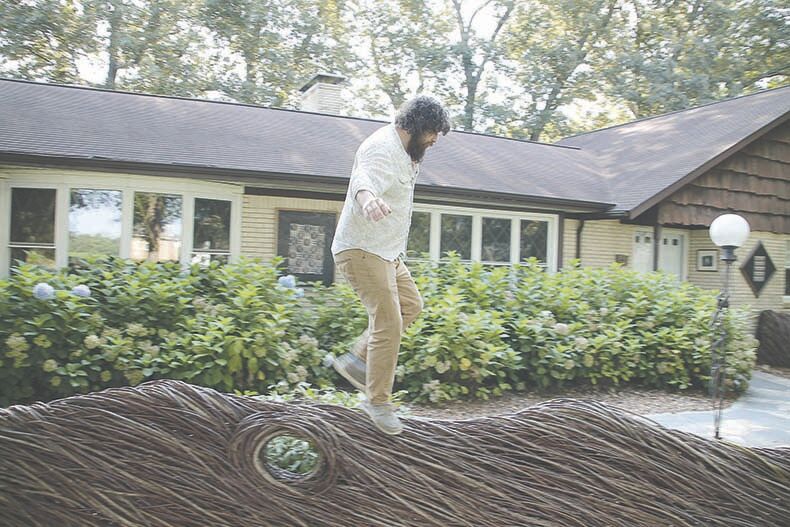 Justin Roberts demonstrates the strength of the fence by walking across it. 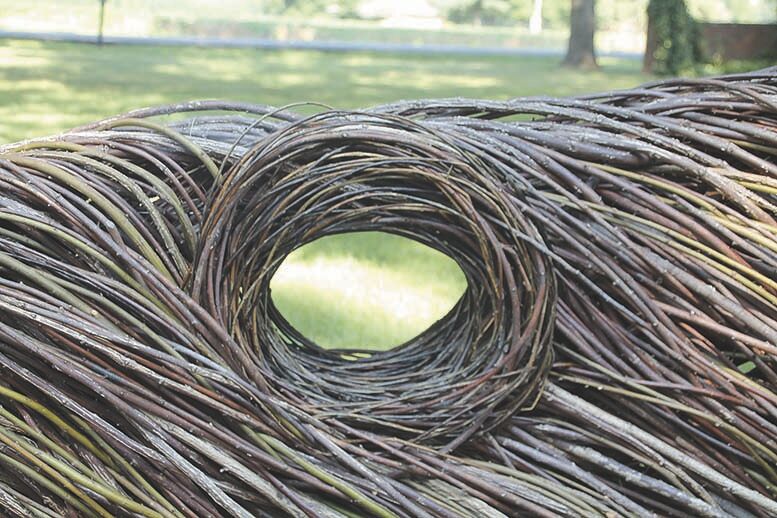 Artist Justin Roberts proudly stands beneath the arch of the long willow fence he recently completed on Robertson Road after two years of work.

Justin Roberts demonstrates the strength of the fence by walking across it.

MURRAY – Local artist Justin Roberts is used to taking his time with his craft of making willow furniture and art, but that idea was taken to the extreme when he recently completed a project two years in the making.

Roberts is the founder of “Walk the Willow,” which he calls a “sculptural garden,” making willow furniture and other art, as well as teaching the craft to others. His wife, Shannon Davis-Roberts, is a bit more specific in her description, referring to it as an “eco-centric, social-entrepreneurial artisan company” specializing in willow furniture and sculpture. He studied under Calloway County’s master willow furniture craftsman George Beard, living in Beard’s home with Shannon and their oldest child for four years as he honed his craft under Beard’s guidance.

For the last two years, he has been working on a large willow fence that stretches across the entire front walkway in front of a house on Robertson Road South, and he finally finished the project last week. The finished fence is 77 feet long with a rolling top averaging from 4 1/2 feet to 2 1/2 feet, with a 9 1/2-foot arch, Roberts said. It is the home of Constance Alexander and Roy Davis, though the house is currently in the process of being sold as the couple plans to downsize and move into a smaller place down the road.

Roberts said that about five years ago, Alexander and Davis commissioned him to make them a fence from sweet gum logs, and although they liked it, it didn’t prove to be as durable as they and Roberts had hoped. When they commissioned him to do another, he didn’t expect to spend as long on it as he did. With the COVID-19 pandemic hitting last spring, though, he wasn’t working on as many commissions as he usually does and he ended up with a lot of extra time he wasn’t anticipating.

“I had made a fence prior, and they had basically hired me to do another one,” Roberts said. “So I started out weaving, but we had never intended to go this far with it. Then the pandemic happened, and they gave me permission to play. Basically, the rest is history. It just kept going and going. I think I’ve got close to 700 hours in it, and well over 10,000 willow saplings collected on the sides of the roads, on the outskirts of town and throughout town off of KY 80.

“It was off and on over two years between other commissions. Then when the pandemic happened, it really gave me the time to focus on it and play. It helped keep my mind occupied during the uncertainty of the times.”

Even before it was finished, the fence had attracted a lot of attention on the internet. A photo of the fence in progress had been taken from a website devoted to English sculptor Andy Goldsworthy, and that photo ended up being seen by thousands on the popular website Reddit.

“It’s made the front page of Reddit twice, and I put it on there (Tuesday) night, and it went viral again,” he said. “The next thing you know, within three hours, I got over 400 new followers on my Instagram page. I got introduced (to Reddit) because the first time it went viral, somebody had taken my photo and played it as their work. That’s when it went on the front page of Reddit the first time. I woke up the next morning and there were messages in my inbox saying, ‘Dude! Your work’s on Reddit’s front page.’ … So then I made an account to try to reclaim my work. (The person who posted it) tried to play it off as the ‘never-ending fence, eight years in the making.’ I was like, ‘Eight years?!? I’ve only got a year in it so far!”

Roberts started working with willow in 2012, and most of the materials he uses come from a combination of pieces he has foraged in various locations. He also recently started growing his own willow, and he even recently ordered Spanish willow that was grown in Canada and shipped to him.

“I harvest it on the side of the road and around peoples’ ponds,” Roberts said. “Willow is this amazing plant that has the properties to pull heavy metals and toxic from the ground, and as it grows in these ditches, the (road crews) like to wood-chip it or spray chemicals on it, so to me, it’s almost like a race to see who gets to it first. As time went on, I thought, ‘How can I turn this material into something before it goes to waste?’

“So I put two and two together and thought of how I could use this. For instance, every single stick that’s hand cut turns into 4 to 12 chutes, and you can harvest that same plant up to 28 years. I stuck some parts of the fence in the ground, and you can see where it’s growing. So it actually took root. Now the question is to decide if we want to keep it growing and you could weave new pieces as they grow, and they will graft together and grow stronger. Or will we be pulling it out? That’s still kind of the question up in the air, how we want to do that.”

Although willow can be quite strong when woven together, Roberts said he did use other materials to stabilize the fence as he was getting it started. He said he wrapped wire around the pre-existing concrete posts from the old fence before he started weaving in the willow. He said there is also a metal tube underneath the arch entrance that is anchored into the ground with 20-inch spikes.

Alexander said she and her husband were very impressed with the final product. She said the idea for the willow grew naturally from the gum log fence Roberts had made in the past, though the new one is certainly a lot more visually striking.

“We loved that fence and got a lot of comments on it, but it didn’t wear as well as either of us wanted it,” Alexander said. “So I talked to Justin, and of course, we had seen some of his other willow work, and he said he would really like to do something with willow. We have watched the creation of the fence and the process of the way it has emerged. I don’t think either one of us knew what it would look like exactly, and as things changed, Justin would come to me and say (things like), ‘I’d like to put little windows in it.’

“I have a hard time imagining things like this. I don’t have that kind of 3D imagination, but I always said yes. And then he wanted to do an archway, and I thought, ‘That’s very cool.’ I like the archway. So we have experienced the creation of it, and even though we’re selling the house, I think we got the best of the whole process watching it emerge. It’s very organic and really beautiful.”

As a memento, Roberts also created a smaller piece of the fence that is framed with cedar so Alexander and Davis can display it at their new home.

“We like outdoor art, and so it will be something on the outside of our house to bring a little bit of this with us,” Alexander said.

Roberts has a lot of other things going on as well right now. Southern Living plans to feature the last project he finished before the fence, a giant basket he wove around a cast-iron tub inside the magazine’s Idea House in Prospect, which is just outside of Louisville. He also recently completed a sculpture of a 6 1/2-foot tall dancing lady holding a bird in Kansas City, Missouri. On Saturday, Shannon will be giving a talk at the annual Hummingbird Festival at Land Between the Lakes’ Woodlands Nature Station about a project in which Justin and other volunteer artists remove invasive plants to build armatures and wrap willow around them.

“We team up with other artists, poets and musicians to reach a wider audience to raise awareness about important issues within the communities that we build community sculptures,” Roberts said.