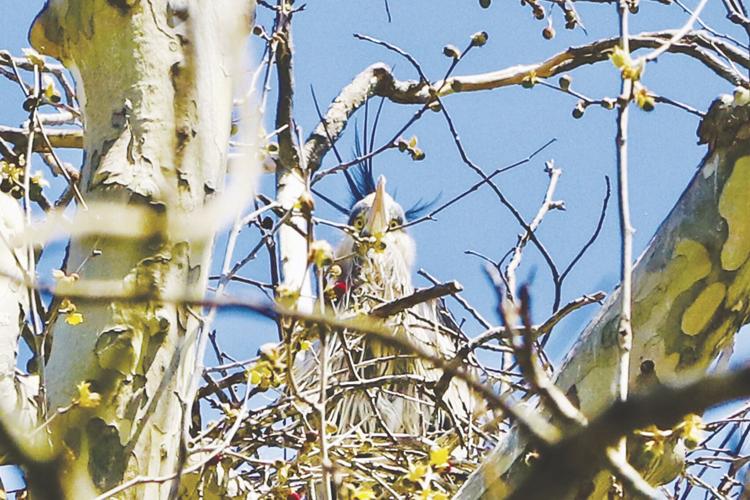 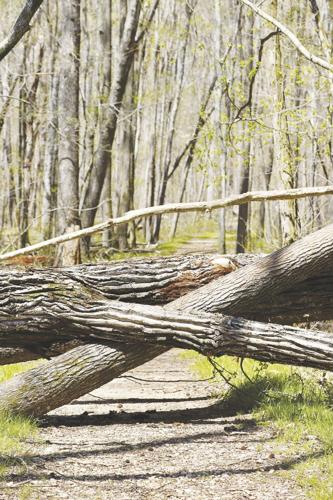 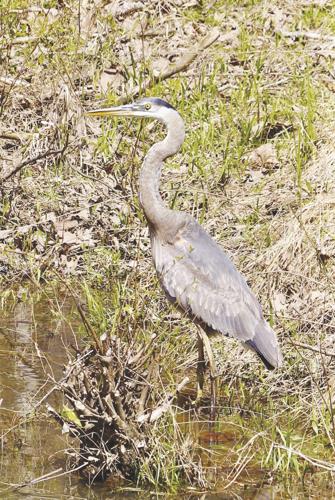 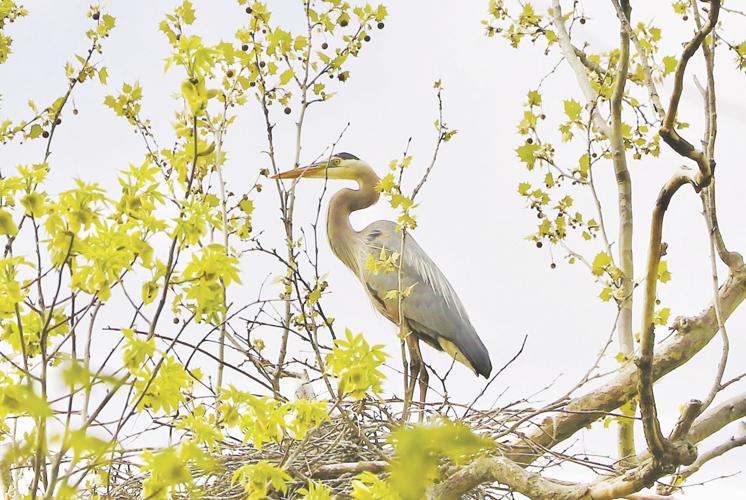 “The greatest wonder is that we can see these trees and not wonder more.” - Ralph Waldo Emerson

I barely noticed the cool mud oozing into my shoes as I slowly inched my way further toward the unusual noises emanating from the trees. A veritable symphony of sound surrounded me as the songbirds of the forest serenaded me with a virtuoso performance, but I felt drawn toward a clatter of sqwuaks that rose above it all. Excitement grew inside of me as I drew closer to the noise. My eyes scanned the treetops and I became momentarily lost in the wonder of what I might find in these trees.

A large, dark figure passed over me and I froze in my tracks. Peering through the thick canopy of the forest I could not tell what created the shadow. I had seen osprey, bald eagles, great white egrets, vultures, and great blue herons around the lake earlier in the day, but something felt different about this.

Motionlessly I stood and searched for the creature through the trees. My feet sank several inches into the wet ground until my shoes were completely covered by the muck. The cold water filling up my shoes and soaking through my socks suddenly made me acutely aware of my surroundings.

I had followed a stream through the woods toward the noise and now I was standing in the middle of an area so inundated with water that it was practically a swamp. Stepping up onto a log to get out of the muddy quagmire, I looked around and felt a shiver run down my spine. Something had changed.

It was as if the conductor had suddenly cut the orchestra of warblers and woodpeckers off and the forest symphony had been silenced. The stillness of the sanctuary made me feel alone for the first time since I began my trek. It was an eerie feeling but a sense of anticipation welled up inside me as I stood silently on that log. Several minutes passed without a sound until an explosion of noise erupted from a nearby group of trees.

I stepped off of my log and back onto the muddy surface to renew my quest. My eyes were focused on the ground as I carefully stepped on fallen trees and the few clumps of solid earth I could find. Within moments, the open water of a lake became visible as the forest thinned. The vibrant blue sky drew my attention as it provided a stark contrast with the darkness of the thick forest.

I was almost mesmerized by the brilliant sky when a great blue heron flew into my field of vision. The majestic but almost prehistoric sight of a great blue heron in flight has always thrilled me so I was excited when it turned and flew right toward me. My excitement turned to wonder as I followed the great bird’s flight all the way to its nest.

The riotous commotion coming from the seven different nests in the tree as the stately bird glided into the roost told me that I had found the source of my mysterious cacophony. I had never seen a great blue heron’s nesting site before, so I pulled out my camera as quietly as possible. Great blue herons are notoriously shy and are always ready to flee any situation that they believe to be dangerous.

Great blue herons are usually thought of as being solitary. This reputation came about because they are solitary hunters and most people only see them while they are out hunting for food. Great blue herons are carnivores and feed on fish, amphibians, insects, shrimp, rodents, and small mammals among other things.

Contrary to their reputation as loners, great blue herons nest in colonies that can grow quite large. These heronries can be found high in treetops near bodies of water throughout most of North and Central America. Heronries can range from just a few nests to hundreds of nests.

The male chooses the nesting site and gathers the building materials while the female constructs the nest. Nests are generally built out of sticks and twigs and measure only around 20 inches wide. If a couple uses the same nesting site for several years the nest will grow much larger. Great blue herons rarely nest on the ground because they are wary of predators. This leads them to build their nests at least 20 feet high in sturdy trees that are close to the water.

Eggs are laid during the spring and hatch within 25 to 30 days. A clutch of eggs usually consists of at least two and as many as seven eggs. The male and female great blue heron take turns incubating the eggs and nurturing the hatchlings. Co-parenting continues until their young are ready to leave the nest. The young herons are ready to spread their wings and venture out into the world in 65 to 90 days.

I thought about an ancient Cherokee story while I watched the activity at the nesting site. The tale explains why the great blue heron feeds alone today.

A long time ago, the Cherokee say that a race called the Little People lived near the water. They were only a few inches tall but enjoyed a good life. Occasional attacks by birds caused them great suffering though since the birds were much larger than the Little People.

Fear of becoming food for a bird no longer held a grip on the Little People until one day a hundred years later. A flock of great blue herons arrived to hunt near the shore that the Little People called home. The warriors went out and fired their arrows to scare the giant birds away but the long legs of the great blue herons meant that their weapons could not reach their target.

The women and children were frightened by the long, sharp beaks of the great blue herons and fled. The tiny warriors of the Little People stood their ground though and bravely faced their unbeatable foe.

The tale explains why the great blue heron exemplifies the message of self-reflection. It tells us that we must face our fears alone and use our gifts to live in harmony.

It seemed like time stood still as I watched the colony of great blue herons. From my vantage point in the muck below, it was like watching creatures from the Jurassic Period flying in and out while being focused on the sole purpose of preparing their young to fly away into the future.

As I turned to leave I glanced back over my shoulder to see a great blue heron standing watch over its hatchlings. My thoughts turned to my own son who is getting ready to leave the nest and fly away into his future soon. I can only hope that he will always wonder more.