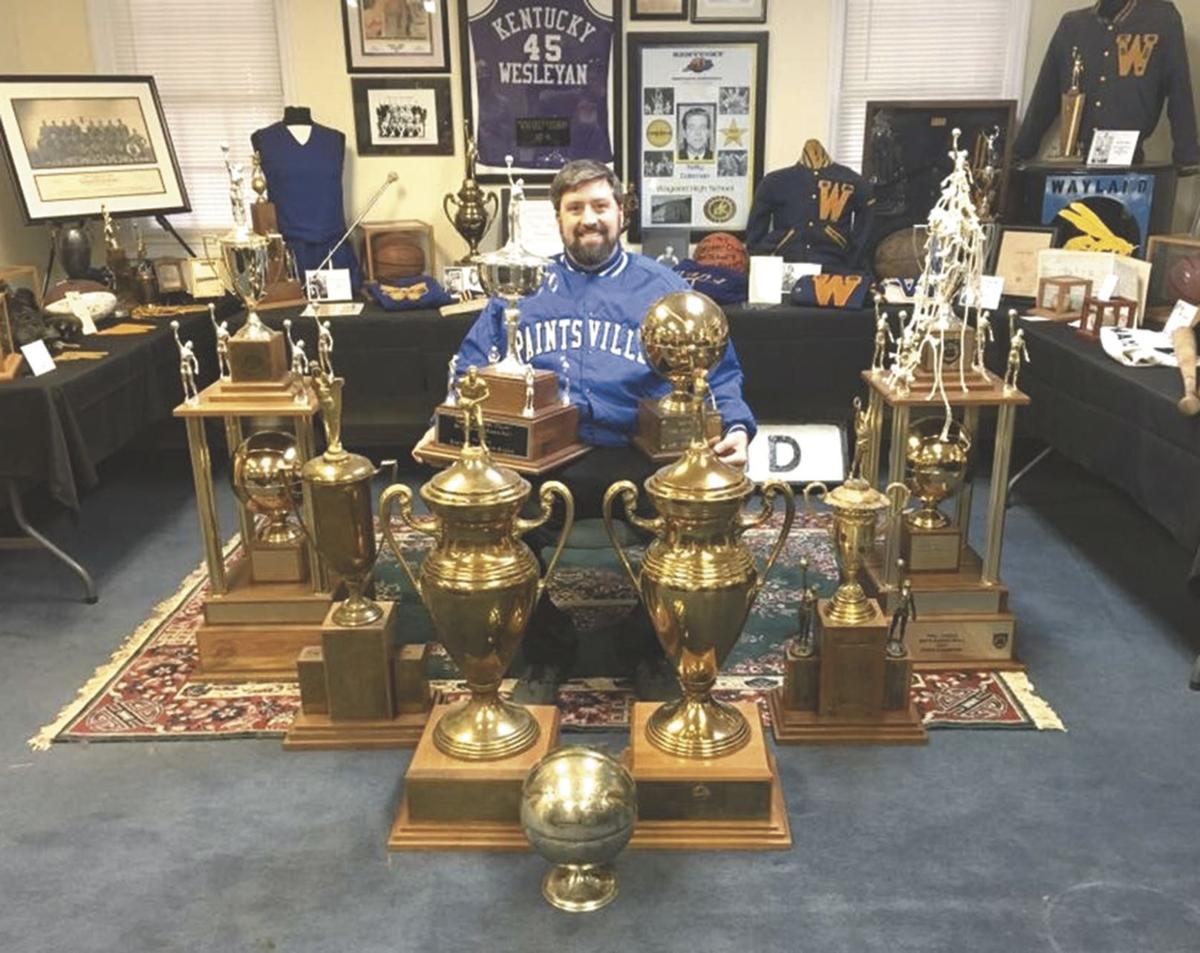 J.R. VanHoose sits with a display of championship trophies won over the years by some of the great high school basketball teams from the mountains. 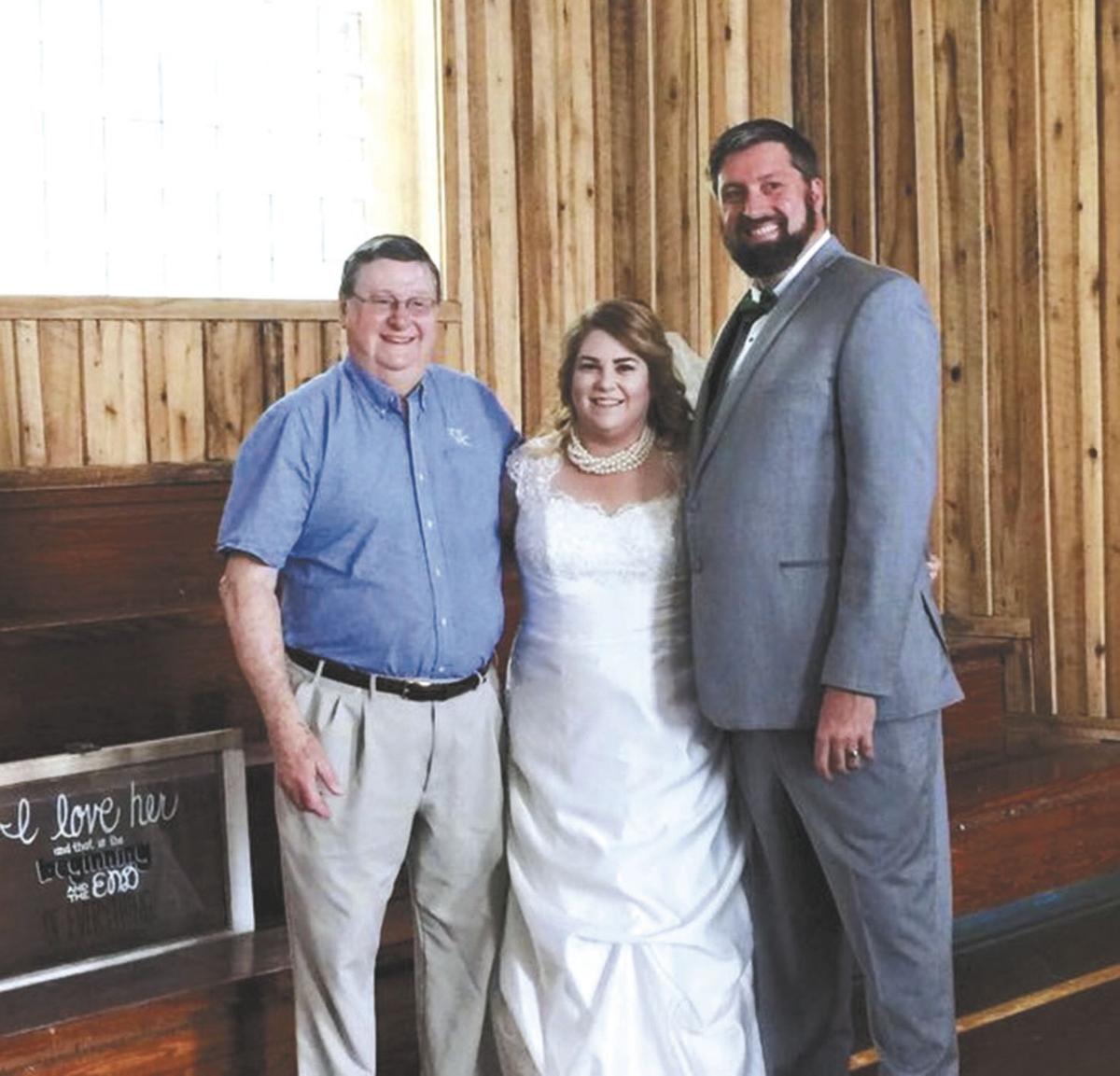 J.R. VanHoose and his bride Kayla stand with former Kentucky Wildcat coach Joe B. Hall in the Oil Springs gym. 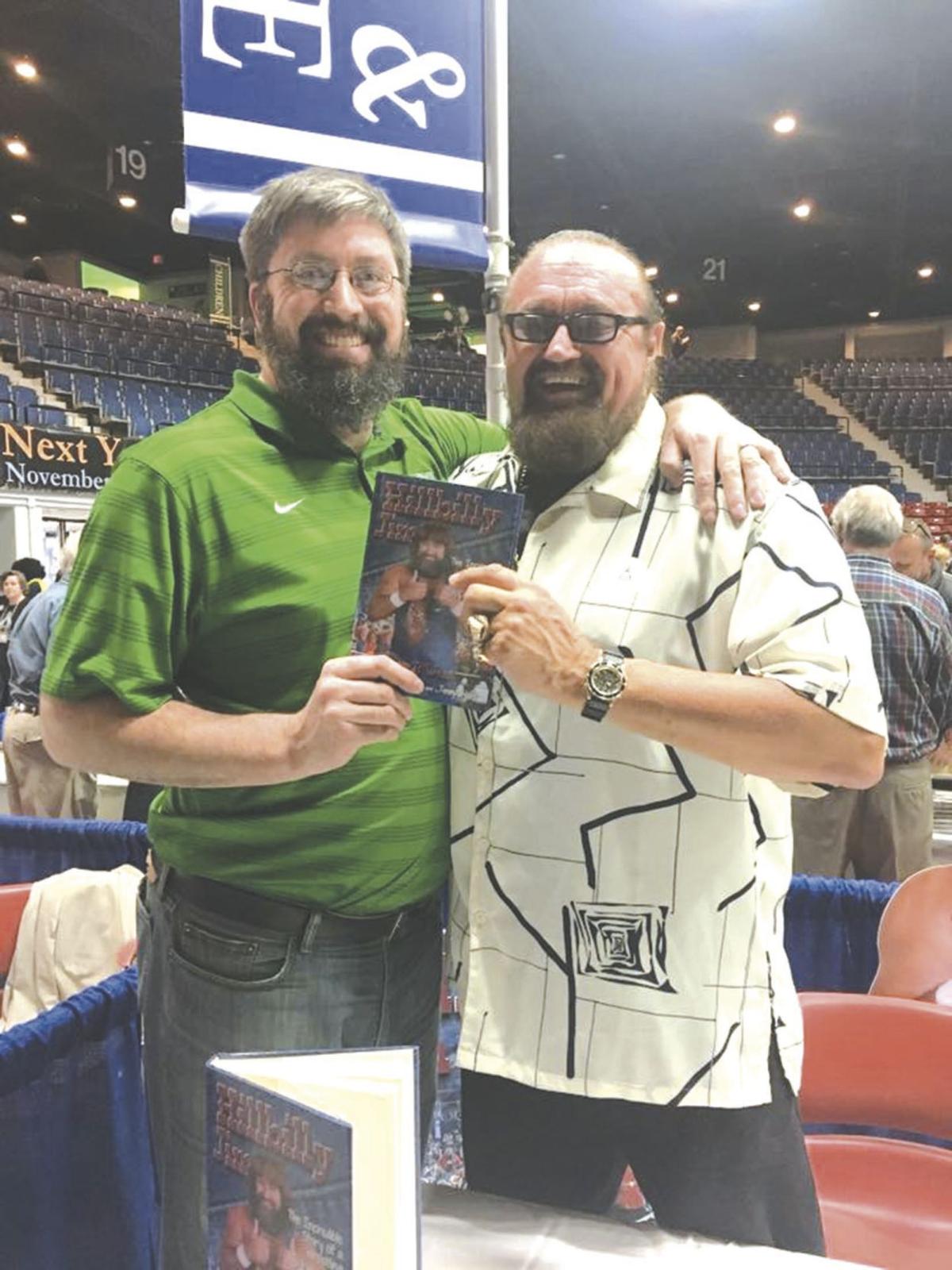 J.R. VanHoose and WWE Hall of Fame wrestler Hillbilly Jim stand together at the Kentucky Book Fair in Frankfort.

J.R. VanHoose sits with a display of championship trophies won over the years by some of the great high school basketball teams from the mountains.

J.R. VanHoose and his bride Kayla stand with former Kentucky Wildcat coach Joe B. Hall in the Oil Springs gym.

J.R. VanHoose and WWE Hall of Fame wrestler Hillbilly Jim stand together at the Kentucky Book Fair in Frankfort.

Whenever Jonathan VanHoose walks into a room, there is a good chance he’ll be the biggest person in the room. No, there’s a real good chance.

At 6’9” and weighing somewhere around 300 pounds, this hulk of a man is undoubtedly the largest school teacher in Kentucky.

In case you’ve figured it out by now, Jonathan’s middle name is Robert, and he answers to the name of J.R. VanHoose, one of the greatest high school basketball players in the history of our roundball crazy state.

J.R. is now the assistant coach of Johnson Central High School, the arch rival of cross-town Paintsville High School, the school he led to the 1996 Kentucky schoolboy state championship in which he was the MVP while only a sophomore.

While many of his students call him “Coach,” he is equally proud to be called a teacher.

“I majored in liberal arts with a concentration on history,” J.R. said. “I teach AP (Advanced Placement) U. S. History, and Criminal Justice, and am our school’s Department Chair of Social Studies.”

VanHoose is one of only a handful of players who has participated in four consecutive boys state tournaments (Richie Farmer played in five with Clay County). Following the championship win in 1996, his Paintsville team lost in the 1997 semis, and the following year in the finals.  He also played as a freshman.  In 1998 he was named Mr. Basketball in Kentucky.

“I’ve had a lot of pressure on me since my eighth grade year,” he said. “Some national publication had me as one of the top eighth graders in the country and then each year it kept growing.”

As expected VanHoose was one of the most heavily recruited players in the nation.  In the process of it all he was the epitome of a student-athlete.

“I made three official visits before my senior year to Vanderbilt, Notre Dame, and Marshall,” he said.  “However, I had several unofficial visits to Indiana, Kentucky, and Tennessee.”

The Indiana visit will forever be unforgettable because of, you guessed it, Bobby Knight.

“There were a few of us (recruits) and Dan Dakich (assistant coach) was the one showing us around during our visit,” VanHoose laughed. “Coach Knight got thrown out of the game during the first half.  We were supposed to see him after the game.  We waited and waited and finally coach Dakich came in and told us coach Knight had gone home.”

At Notre Dame, the football team was used to recruiting basketball players.

“They took us to the football dressing room to hear all of the pregame stuff,” he recalled.  “They wanted us recruits to run onto the field with their team.  It was something to experience.  We ran out and man, I was ready to play ... pretty cool.”

But what about Kentucky?  John Pelphrey had led Paintsville to the state title in 1987 and had become a popular player at UK for Rick Pitino.

“I really liked coach Pitino,” VanHoose said. “He liked me but wanted to wait until later to sign me. I definitely wanted to sign before my senior season started. So I decided on Marshall.”

To this day, there are those who wish J.R. had stayed in Kentucky, but he makes it clear he has no regrets about going to Marshall, the school in Huntington, West Virginia, 60 miles from home.

“It was a great fit for me. My family was close and could see me play and I had a really good career,” he said.

Indeed he did, averaging for four seasons over 16 points and just under 10 rebounds a game.

Not only does J.R. talk the talk in the classroom, but he walks the walk out of it.

“I love researching Kentucky history, and learning more about the people who came before me,” he says.

For him, history and geography go hand-in-hand, especially in Kentucky. He uses some of his summertime and weekend travels to visit basketball legends, some who date back to the 50s.

“I like basketball history, I was a part of it,” he continues.  “Because my name is now a part of it, I want to learn more.”

J.R. takes pride in listing his profile to include; “teacher/coach/writer/historian/genealogist/former athlete.”

He has become an accomplished writer, being published in several state wide publications, and is currently doing some research on a book.

J.R. and wife Kayla, who were married in 2016 in the Oil Springs High School Gym, spent much of their time over the last several months traveling 35 miles each way to Wayland, in Floyd County to visit and help care for King Kelly Coleman, the legendary basketball player who died in June 2019.  “We made the trip at least twice a week, sometimes, though (it was) depending on Kelly’s needs,” he said.  “Kayla and I looked at Kelly like he was a grandfather to us.  He wasn’t King Kelly, he was Kelly.”

To further show the respect he has earned across Kentucky, J.R. and Kayla invited former Kentucky coach Joe B. Hall to their wedding.  And even though J.R. didn’t play for the legendary coach or even go to UK, the Hall of Fame coach  made the trip.

With J.R. VanHoose now a part of the Johnson Central basketball program, there are some in Paintsville, a city of less than 5,000, who aren’t particularly happy about it.

“I’m doing my job, what I was hired to do,” he says.  “Some Paintsville High School fans have a hard time with it.  Some even think I’m a traitor.  I hope they don’t get rid of all the trophies and awards I helped win there.”

Growing up as one of the best high school players in the nation, VanHoose had every opportunity to keep increasing the size of his caps.  Appearing on covers of magazines, in demand for interviews, and with some of the biggest names in college coaching coming to Paintsville, it would have been understandable for this mountain of a kid to be feeling his Cheerios.

But it never happened.

“The whole recruiting thing was nerve-racking,” he said.  “But I never thought I was hot stuff.”

Perhaps this is why J.R. VanHoose, who was always a good student, a great basketball player, and now an even better teacher, now has the opportunity to impact more kids from Johnson County than he ever did playing basketball.

There’s no excuse, get up, get out and get going!