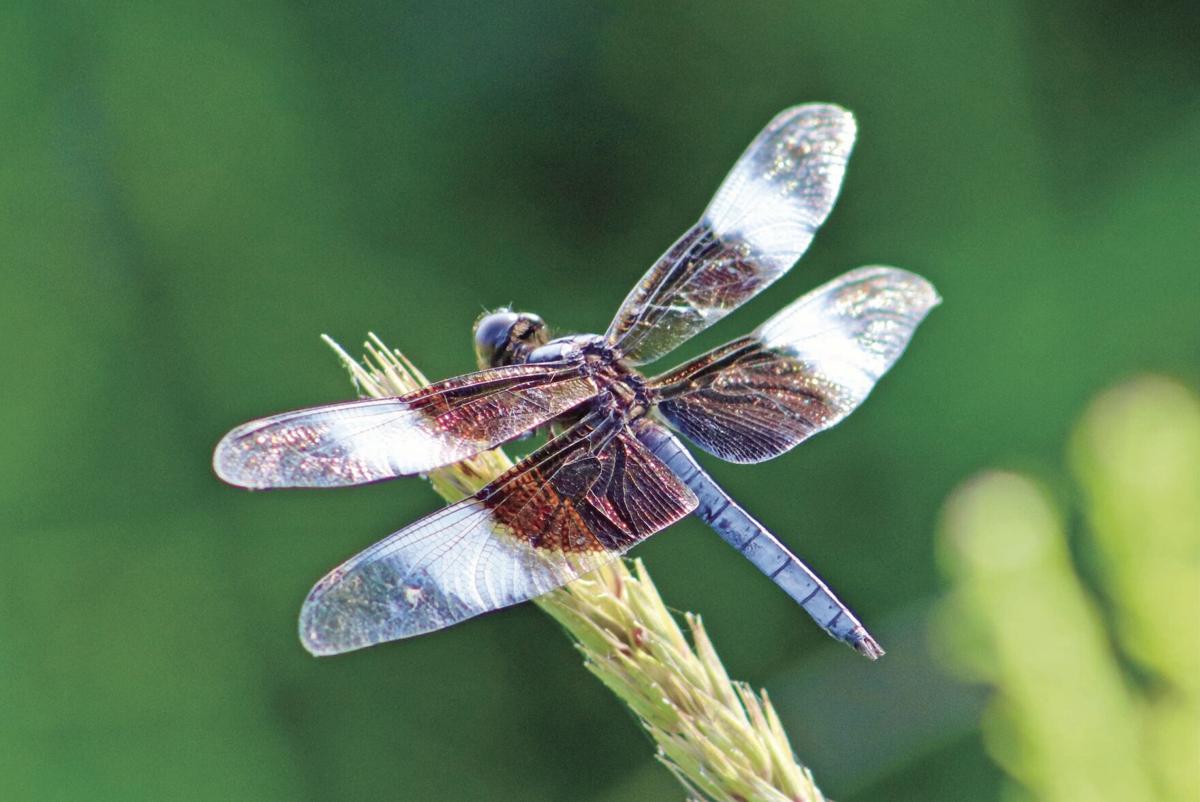 This male Widow Skimmer was among the hundreds of dragonflies that surrounded me in an open area during a recent hike. 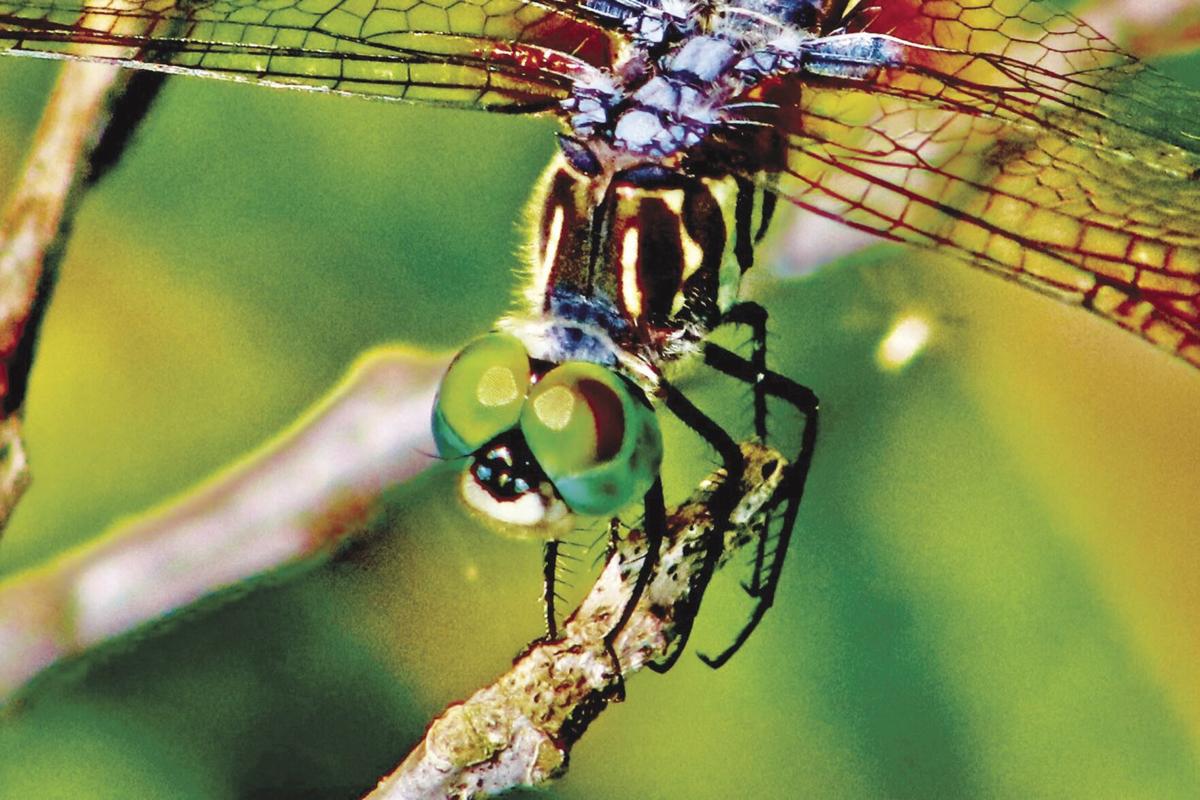 The two compound eyes of this Blue Dasher each have 30,000 facets that are pointed in different directions. The giant eyes give the dragonfly close to a 360-degree field of vision. 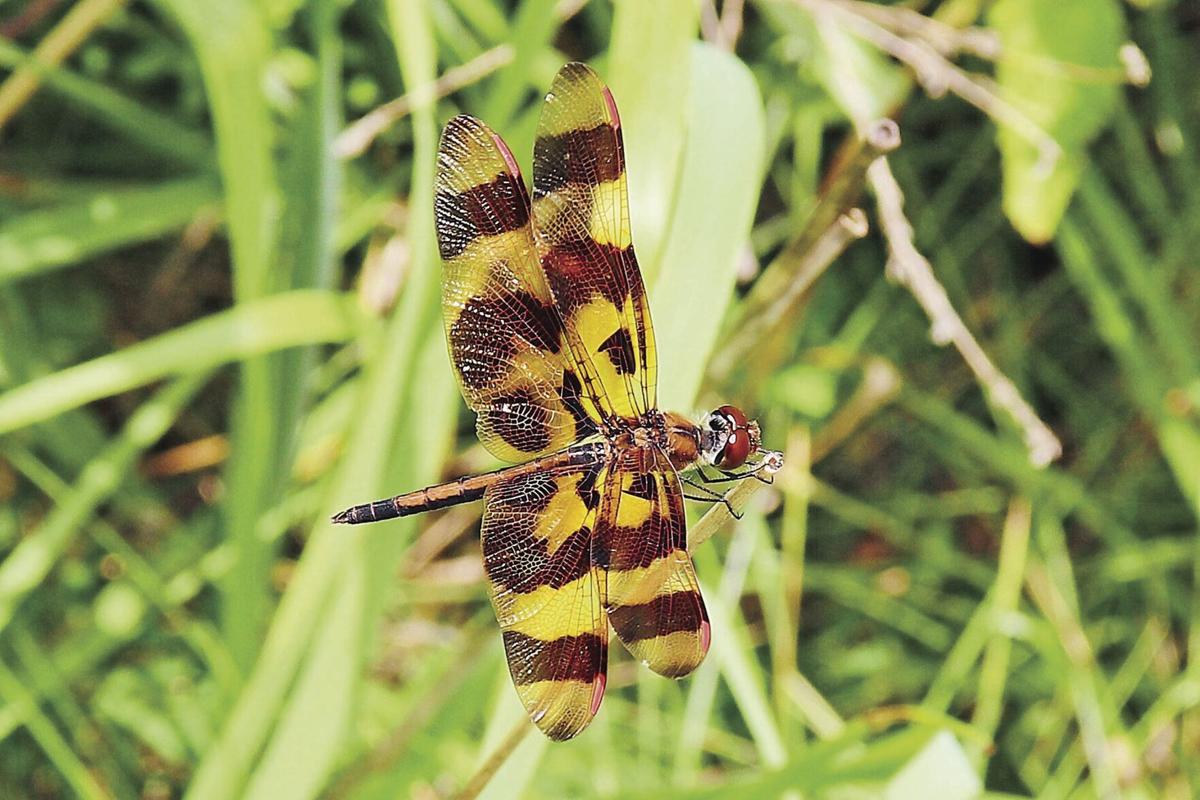 This Halloween Pennant was among hundreds of dragonflies that surrounded me during a recent early morning hike.

This male Widow Skimmer was among the hundreds of dragonflies that surrounded me in an open area during a recent hike.

The two compound eyes of this Blue Dasher each have 30,000 facets that are pointed in different directions. The giant eyes give the dragonfly close to a 360-degree field of vision.

This Halloween Pennant was among hundreds of dragonflies that surrounded me during a recent early morning hike.

“Time is for dragonflies and angels. The former live too little and the latter live too long.” - James Thurber

It was a magical feeling of transformation. A moment earlier I was enjoying a hike through a forest that surrounded a small lake. My attention was focused on blackberries and butterflies as I came out of the woods and into an open field. I suddenly felt like a 10-year-old kid again.

A sense of an airy lightness filled my body as I saw a brilliant flash of green fly by me. It happened so fast that I spun around trying to follow it with my eyes. As I scanned the tall grasses for the iridescent green blur, I became acutely aware of a low buzzing sound.

My laser-like focus on finding whatever had caught my attention a few seconds earlier subsided and I took in the whole scene around me. I was completely surrounded by hundreds of dragonflies. There were several different types and they were flying back and forth around the top of the grasses. I began to take pictures and it seemed like time had stopped; I was transported to a particular day from long ago.

As a little red-headed freckle-faced boy, I had an irrational fear of dragonflies. I wasn’t afraid of things like wasps and hornets, but dragonflies truly frightened me. Maybe it was the name. Maybe it was the way they whizzed around through the air so quickly that I couldn’t really see how I would escape if they attacked me. Of course, dragonflies don’t sting or bite humans, but that did not matter to me at the time.

My fear of dragonflies vanished one morning in July when I was 10. I was running through the woods near my house with Shannan, my Irish Setter. Shannan galloped out into an open field and disappeared as I chased after her.

She leaped out of the hay in the meadow and knocked me down. I wrestled with Shannan as she happily licked my face before bounding away to chase a bird that landed nearby. I sat up and looked around the field for my dog, and was shocked by what I saw. Hundreds of dragonflies were floating just above the top of the hay throughout the field as the light of the early morning sun danced off of their translucent wings and brightly colored bodies. The beauty of the moment settled over me and my fear faded into oblivion as I drank in the scene.

The ancestors of today’s dragonflies were some of the first insects to inhabit the Earth. These fantastic creatures have been flying about our planet for over 300 million years. That’s approximately 70 million years before dinosaurs first began roaming the Earth. There are over 3,000 species of dragonflies on Earth today and they inhabit every continent except Antarctica.

In those early days, during the late Paleozoic Period, some species of dragonfly were gigantic. These dragonflies were among the largest insects to ever live. They had a wingspan of up to three feet and weighed more than a pound. I might still be afraid of dragonflies today if they were flying around the size of a hawk.

Adult dragonflies today snatch their prey in mid-flight with unbelievable aerial acrobatics. The dragonfly achieves success at almost 95% when hunting their prey, but it is not just their flying skills that lead to their high rate of success. Dragonflies actually plan and ambush unsuspecting targets. In a split second, they can calculate the speed and flight path of their victim and adjust their flight to seize their prey effectively.

I shudder to think about a giant dragonfly with a wingspan of almost three feet chasing me. I am not sure I would have ever left the house as a 10-year-old. Luckily, the dragonflies of today are only terrifying if you are a mosquito, fly, or any other insect that is on their menu.

Once they catch their prey, the incredibly sharp mandibles of the dragonfly come into play. The dragonfly is in the order Odonata. Odonata is derived from the Greek word for tooth and they received the name because of their serrated mandibles. After securing their prey with their feet, dragonflies rip the wings off of it and devour it without ever needing to land.

Very few dragonflies have strong enough mandibles to pierce human skin because of their size. Several species are large enough to break the skin of a human being, but they only use this ability defensively.

Dragonflies are born in the water and spend most of their lives as aquatic creatures. When the larvae hatch from eggs laid in the water, they are already capable of hunting and survival. Most species live underwater for up to two years, but some may remain in the water as a nymph for as long as six years.

The dragonfly nymph has the same marvelous hunting ability as the adult dragonfly. The nymph’s diet includes a wide variety of prey including other aquatic insects, tadpoles and small fish. A nymph may molt more than 15 times before it is ready to emerge from the water and make its transition to becoming a winged adult dragonfly. The adult life expectancy of a dragonfly ranges from one to six months. It takes up to three hours before the adult body is ready to take flight and begin the search for a mate.

The flying ability of a dragonfly is practically unparalleled. Dragonflies can stop instantly and fly off in any direction. They are one of the few creatures in the world that can fly backward, sideways, or upside down. Dragonflies are also capable of stopping in mid-air and hovering for over a minute.

One tiny type of dragonfly has also given the insect the title of the world’s longest distance migrating creature. The Globe Skimmer is a little over one-inch long. This tiny dragonfly lives up to its name though, as it makes a multi-generational migration that covers over 11,000 miles. To complete the journey one single globe skimmer can fly over 4,000 miles.

Few species in the animal kingdom can compare with the dragonfly when it comes to flying ability. Much of this is accomplished because the dragonfly has four wings that can work independently of each other with a separate muscle that controls each wing. This enables the dragonfly to change the angle and direction of each wing. This provides incredible strength and agility in flight.

Another area in which the dragonfly may exceed any other insect is vision. Dragonflies have the largest compound eyes of any insect. The two compound eyes cover most of the head and make the insect look like it is wearing a helmet. These compound eyes are supplemented by three eyes with simple lenses. There are up to 30,000 facets in each compound eye and they all point in a different direction. This allows the dragonfly to have almost 360-degree vision which enables it to focus on prey while avoiding flying into other things.

I was still lost in the memory of that day long ago as I tried to get a close-up of those unique dragonfly eyes. The voice of my wife calling out to me snapped me back to reality, but I knelt down and took a little more time to enjoy the magical dragonflies because they live too little.