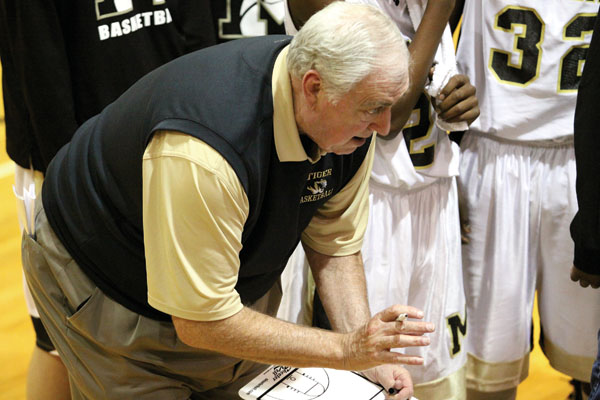 Ron Greene instructs his Murray High School team during a timeout in a game earlier this season at Tiger Gym. Greene leaves Murray after coming out of retirement three years ago to take over the program. 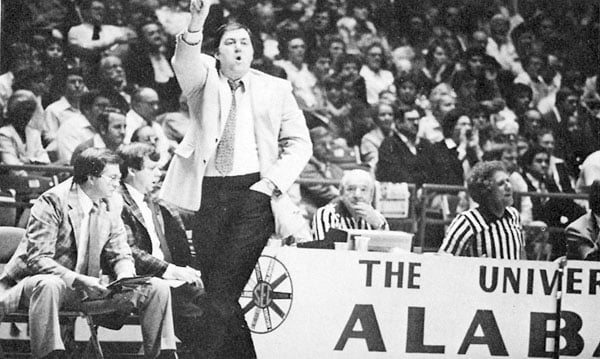 Ron Greene instructs his Murray High School team during a timeout in a game earlier this season at Tiger Gym. Greene leaves Murray after coming out of retirement three years ago to take over the program.

Ed Chapman figures if he had spent as much time on his course work as he did studying basketball during college, he would have left with a higher grade-point average.

Instead, Chapman was busy graduating from the school of Ron Greene.

As a young man pursuing a career in coaching, Chapman, just a year removed from high school himself, found the perfect scenario right under his nose.

His alma mater, Calloway County, had just hired a former Southeastern Conference Coach of the Year and the man credited with helping mold Murray State’s program into the mid-major power it is today. Chapman wanted to be his assistant.

So he can still point out the exact spot on the court at Calloway’s Jeffrey Gymnasium in which he first shook hands with Ron Greene, thereby opening a door through which he feels he has been blessed a thousand times over.

“He really quizzed me to see what my philosophy of basketball was,” Chapman remembers of that first meeting with Greene. “I knew right then and there, this was a man who loved basketball the way I did, the technical aspects of it and the detailed concepts on the court. That just fueled my fire, and if I could have majored in basketball at Murray State, I would have. For the next three years, I learned 95 percent of what I know about basketball.”

Greene seems to have a similar effect on many who have crossed his path during a coaching career that began in 1965 at Loyola University New Orleans.

But with his Murray High School team’s loss to Calloway County in the 4th District tournament on Feb. 22, Greene, 72, closed another chapter, perhaps the final one, in his basketball career.

The loss brought to close a three-year stint at Murray for Greene, who came out of retirement to take the job at the school that was once his crosstown rival during his four-year tenure at Calloway from 1992-99.

The greatest feat of Greene’s time at Murray came in his first year on the bench, when he took the Tigers to the All ‘A’ state tournament for the second consecutive season, fighting off such adversity as an injured starting point guard and a devastating ice storm that threatened to negate the Tigers’ travel plans to Richmond.

Since then, his time at Tiger Gym has been more of a study in almosts. Murray was knocked out of the district tournament in the first round by Calloway in each of the past three seasons, though each game has been competitive.

This past season was intended to be a transitional year to new head coach Joey Adair, who was named coach-in-waiting in March of 2010. Adair coached the junior varsity team and spent much of his time getting to know the younger players and evaluating talent in the middle school programs.

Despite an inability to get the Tigers to the First Region tournament during his tenure, Greene has no regrets in regards to the past three years.

“I’m glad I did it, it was enjoyable,” said Greene, who went a combined 35-42 over three seasons. “I got to meet some good people in the Murray administration, and I enjoyed that aspect of it.

“It was good, but I couldn’t have a steady diet of what’s needed to get done, and I think there are going to be a lot of improvements (under Adair). I don’t have any regrets. My only regret is that we couldn’t have gotten more done on the wins and losses side.”

Greene’s feelings are in line with those of Murray’s administration as well. Athletic director David Fields, who opened the door for Greene when he stepped down from the position after the 2007-08 season, says his familiarity with the veteran coach — he had previously worked with someone who played with Greene  — made him a comfortable choice for the position.

With plenty of returning talent, Fields said, at the time, it was important to hire someone with a proven track record rather than a younger coach with whom to build the program around.

“I didn’t know how long coach Greene could commit to it, but I knew I had a group of kids that I felt very close to,” he said. “I definitely trusted him to do whatever he needed to win, and that first year I feel like if (point guard) Blake Darnall doesn’t get hurt, I think they go to the region and at least have a chance.”

Though he hasn’t coached a college game since leaving Indiana State in 1989, it’s his seven-year tenure at Murray State that ended in ’85 for which Greene is most well-remembered locally.

He engineered what stood for some time as the greatest one-year turnaround in NCAA history in his second season at the helm, taking the Racers from 4-22 to 23-8 and an Ohio Valley Conference championship in 1979-80.

He coached such memorable names as Lamont Sleets, Gary Hooker, Glen Green and Ricky Hood and helped put Murray State on the nation’s basketball map when his team went on the road and beat Alabama in what was then a more respected NIT postseason tournament in 1980.

“The first time I ever remember seeing coach Greene, I was 10 years old and I came to my first Murray State game at Racer Arena,” recalls Bruce Lane, current head coach at Calloway, who formed a friendship with Greene when he began to teach at CCHS during Greene’s coaching tenure.

“When I got to Calloway, it kind of took me back to those days of going to the old arena and watching the team play. I was real fortunate to hear a lot of stories about those guys, even teams he had at Mississippi State.”

Aside from coaching basketball, his storytelling is a quality for which Greene is most well-known.

Of course there’s also the demonstrative on-court antics. After being ejected from a rivalry game at Calloway last season, Greene stood along the rail above the seats at Jeffrey Gymnasium, apparently signaling to his assistant coaches on the bench.

He was then asked to leave the building.

“Most of the folks in the public who have seen him coach are too quick to associate his sideline demeanor they see during the game and assume that’s how he is as a person, and nothing really could be farther than the truth,” says Chapman, who still serves as an assistant at Calloway.

“He’s flamboyant. He’s always had a flair and a style, and that was true all the way back to his Murray State days.”

But friends of Greene know him primarily as a family man who, despite his dry sense of humor, generally takes a positive outlook on things.

Lane remembers a time during his first season as a head coach in which he called Greene after a particularly disheartening loss in which his club had scored just 32 points.

Greene was quick to point to a recent loss suffered by St. Louis University in which the Billikens managed just 23. That team was coached by Rick Majerus, who had previously taken Utah to the National Championship game.

“He said, ‘Bruce, Majerus just scored 23, and he’s one of the best. Those things are gonna happen,’” Lane recalls. “He was real positive with me, and it was real tough (when he took the Murray job) to have the tables turned and the guy you call, you’re now competing with him. I did not enjoy that in the least bit.”

As a coach, Greene is remembered most for his attention to detail in terms of offensive strategies and his ability to maximize the talent he had at his disposal.

With his free schedule next winter, Greene says he plans to escape from the Kentucky cold by spending time in Florida, where he has three children and six grandchildren.

He also plans to spend more time with his one local grandson as well as work on his golf game.

He says the only way he would return to basketball is if it was in a role similar to which legendary Purdue coach Gene Keady currently serves at St. John’s. When Steve Lavin took over the Red Storm program prior to the 2010 season, he hired Keady as an assistant whose main roles are to break down game film and serve as a bench coach at games.

As for Murray, Fields says he is more than confident Adair will steer the program in the right direction. But he also believes his players missed out on an opportunity.

“I don’t think some of our kids really realize what they had,” he said. “Coach Greene deals a lot with the mental aspect of coaching, and he talks to the guys a lot. In high school, I think sometimes the more you talk, the more the kids tune you out. I think some guys are going to realize they missed an opportunity to truly soak up all the knowledge they can.”