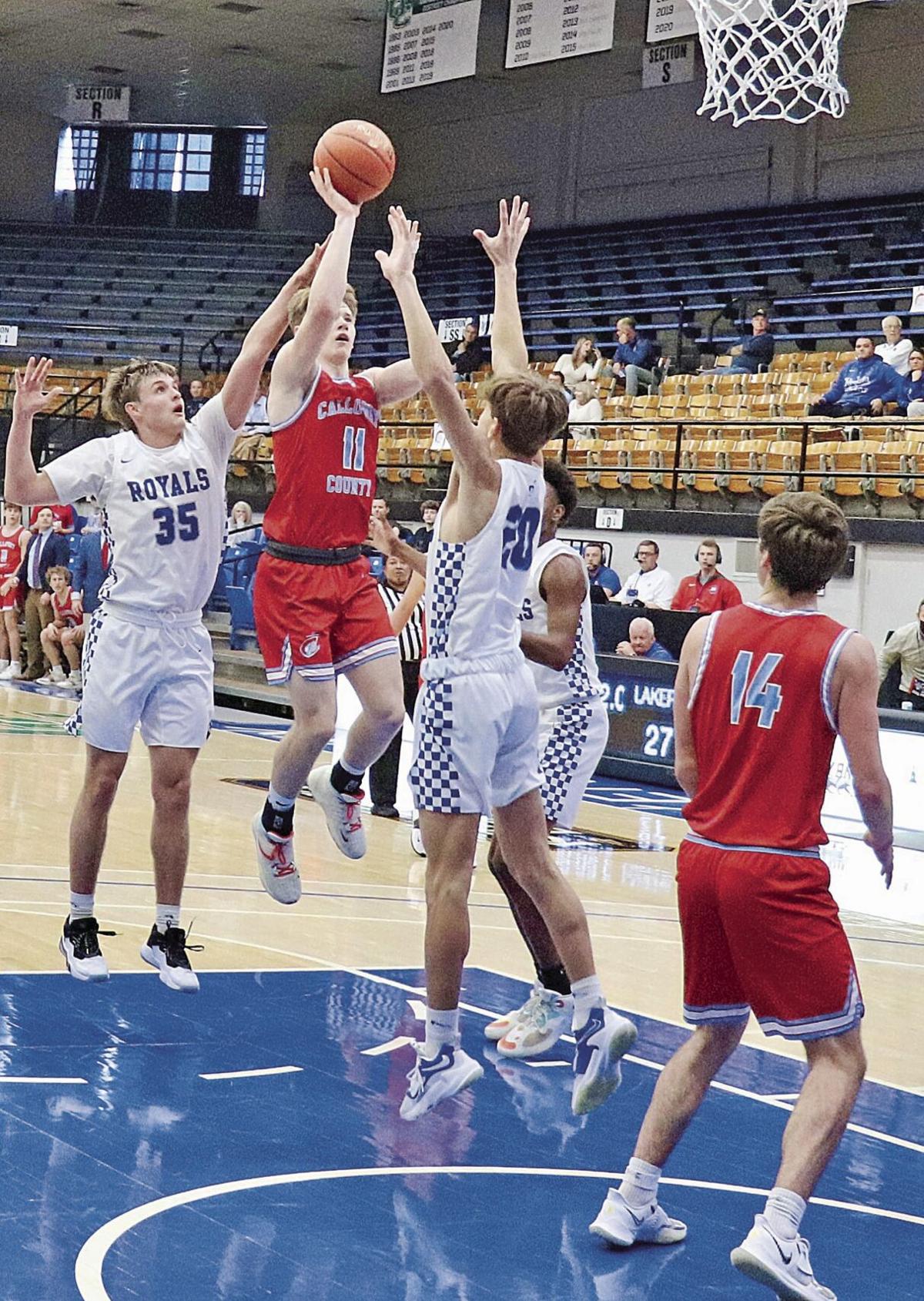 Calloway County's Eli Finley hangs for a jumper in the lane Thursday afternoon, while teammate Zach Hudgin (14) finds space to rebound in the Kentucky State Class 2A Boys Basketball Tournament in Owensboro. 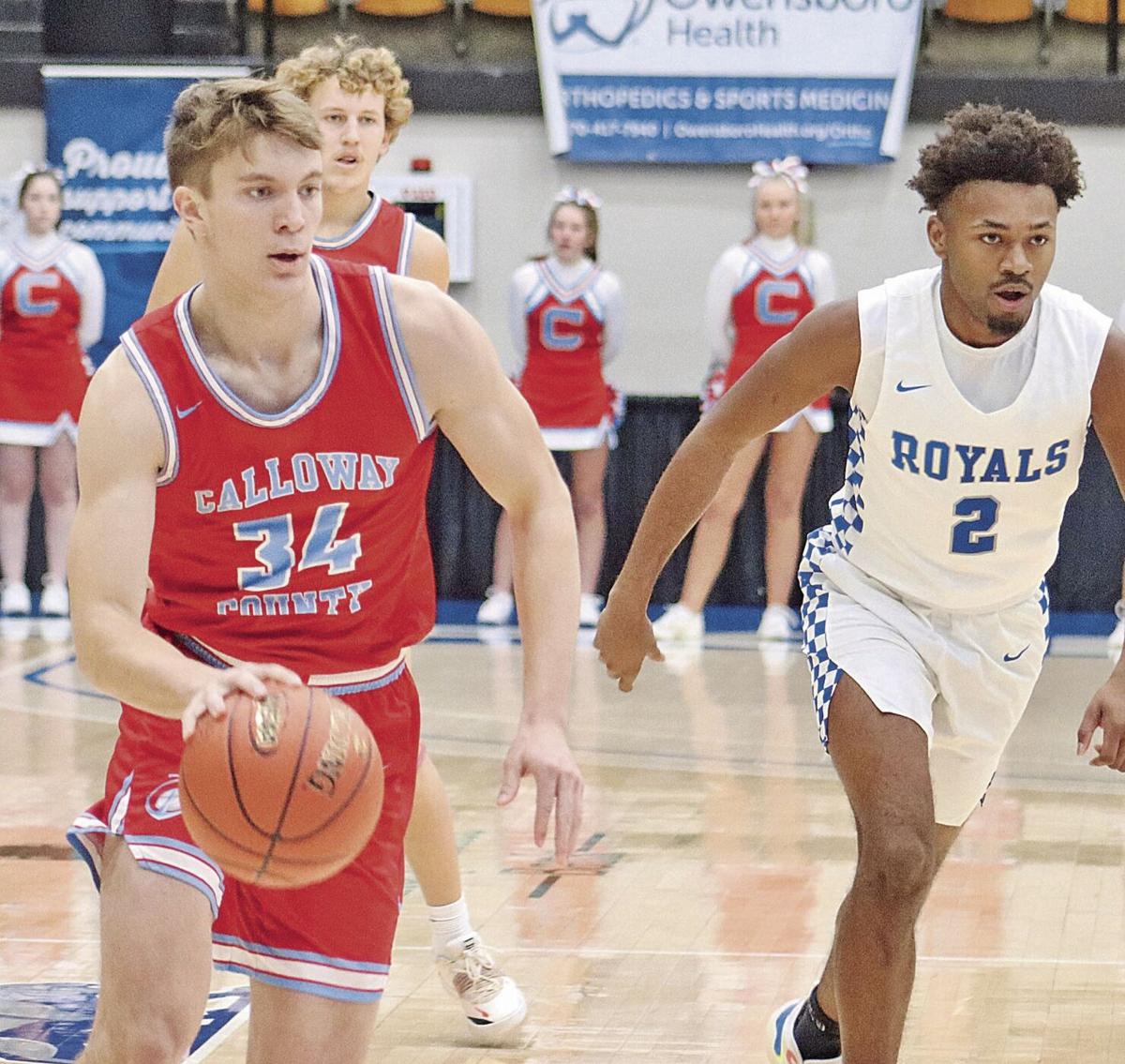 Calloway County's Matthew Ray (34) attacks the basket in transition for the Lakers Thursday afternoon against Mason County in Owensboro.

Calloway County's Eli Finley hangs for a jumper in the lane Thursday afternoon, while teammate Zach Hudgin (14) finds space to rebound in the Kentucky State Class 2A Boys Basketball Tournament in Owensboro.

Calloway County's Matthew Ray (34) attacks the basket in transition for the Lakers Thursday afternoon against Mason County in Owensboro.

The teams battled in a true thriller at the Owensboro SportsCenter until Mason’s Braylon Hamilton made two free throws with two seconds left to seal his team’s 61-57 victory.

Mason, a longtime state power, moved to 15-3 on the season and advances to face Lexington Catholic in the semifinals on Saturday. The Lakers fell to 10-7 after having their four-game win streak snapped by the Royals’ come from behind victory.

The Royals were heavily favored in the opening round but a quickly improving Calloway team took control of the game in the second quarter with a 19-4 run. The Lakers contested every Mason shot and kept the athletic Royals off of the offensive glass in the stanza. That combination helped limit the Royals to only one made field goal while Calloway knocked down 47% of their shots and connected on three of their five 3-point shots in the quarter. Calloway took a 29-17 lead into the locker room at halftime.

One of the biggest keys to that lead was the Laker’s ability to take care of the basketball. Mason played an aggressive run-and-jump defense but the Lakers handled the swarming traps and converted easy baskets in transition. Excellent Calloway ball security kept the Royals from scoring easy baskets in transition as Mason only scored four points off of turnovers in the first half.

The second half started with five straight Calloway turnovers, though, and the Royals’ confidence in their defense grew from there. Mason scored eight points off of those turnovers. The transition opportunities also led to eight free-throw attempts and wide-open 3-pointers.

Mason went from being held to 20% from the field in the first half to shooting 53% in the third quarter. Calloway still held a 10-point lead with 1:15 left in the stanza after Jonah Butler drove to the basket for two of his 12 points. But the he Royals closed the quarter on a 7-0 scoring run over the final minute to pull within three points at 45-42.

Mason took its first lead since early in the second period two minutes into the fourth quarter when Nate Mitchell weaved his way to the basket for two of his 17 points. From that point, it was a back-and-forth affair until Butler pulled up on the right wing and found a cutting Zach Hudgin. Hudgin converted a layup on the left side of the basket for two of his co-team-high 16 points to give Calloway its final lead at 55-54 with less than three minutes to go.

The Lakers stayed within one possession until Eli Finley drained a jump shot from the right side on a perfectly executed baseline out-of-bounds play. Finley’s jumper gave him a co-team-high 16 points and pulled Calloway County even at 57-57 with 1:20 left in the game.

Mitchell calmly sank two free throws on the Royals’ next possession to put his team back in front. Mason made 18 out of its 24 free-throw tries, while the Lakers only attempted six free throws.

The outcome of the game was still hanging in the balance when Calloway Head Coach Brad Cleaver used his final timeout with 10 seconds left. Cleaver’s squad executed their final set but Jonah Butler’s 3-pointer glanced off of the rim and over the head of teammate Zach Hudgin. Hudgin was in great position on the weakside to grab an offensive rebound for a putback to tie the game.

Cleaver praised his team but was left thinking about what might have been.

“I am proud of our team,” Cleaver said. “But I must admit that we all feel that we let that one get away. We are trending in the right direction and there is no doubt about that. Zach Hudgin had a great game with 16 and 7 board; he is such a warrior.

“I have never had to ask him for more effort, he is always ready to battle. Matt Ray was right at his nightly double-double. I thought Jonah Butler had a breakout game on both ends of the floor with several big-time blocks and on-the-money passes.  Finley is a big-time shot-maker that continues to deliver every single outing. We had the ball with a shot to win the ballgame in a state tournament game against a really good team.”

The Lakers have had two upcoming games canceled. Calloway’s next scheduled game is a 7:30 p.m. tip-off at Marshall County on Friday, Jan. 21.