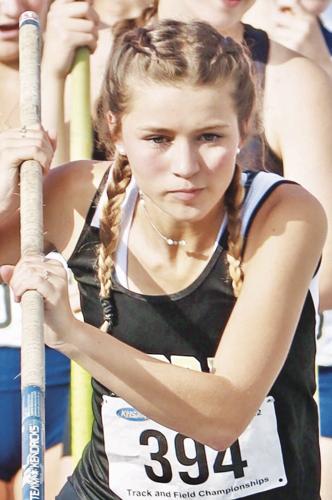 Kynzlee Fox is a picture of concentration as she prepares to compete in the pole vault at the KHSAA Class 1A State Track and Field Championship. Fox earned a spot on the podium with a fourth-place finish. 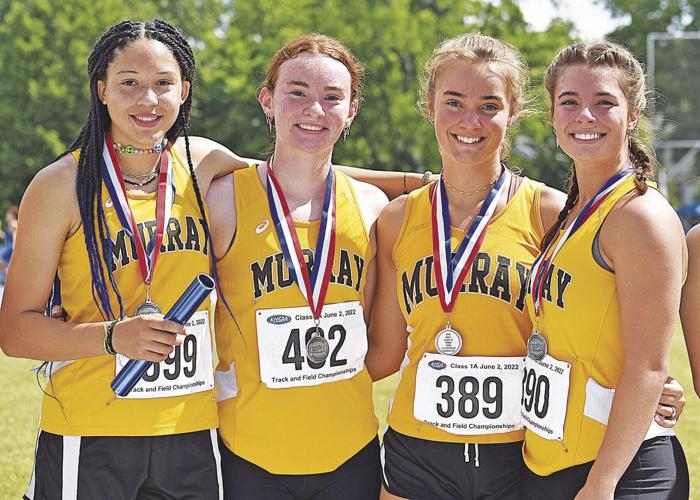 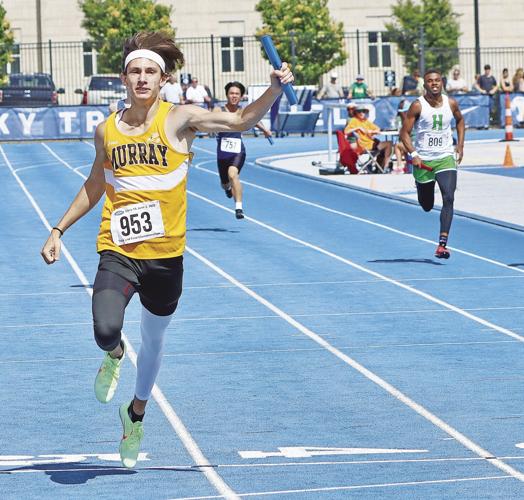 Christian Seavers raises the baton in triumph as he puts the finishing touches on the 4x200-meter relay state championship for Murray High.

Kynzlee Fox is a picture of concentration as she prepares to compete in the pole vault at the KHSAA Class 1A State Track and Field Championship. Fox earned a spot on the podium with a fourth-place finish.

Christian Seavers raises the baton in triumph as he puts the finishing touches on the 4x200-meter relay state championship for Murray High.

Both of Head Coach Krysten Sebby’s teams exited the stadium that afternoon with top-10 finishes in the team competition, while four of the Murray High boys had laid claim to two state championships.

Xavier Biggers, Mason Grant, Kainoa Olive and Christian Seavers blistered the track in the 4x200-meter relay for Murray High’s first championship of the day. Effortless exchanges and consistent splits led to anchor Seavers raising the baton above his head in triumph as he crossed the finish line. The fearsome foursome then returned for the 4x100-meter relay and secured their second state title. The quartet was a dominant force in both events all season and their performance at the KHSAA Class A Track and Field State Championship was the culmination of a remarkable season.

Grant was fifth in the 100-meter dash, while Biggers was 17th in the 200. Keaton McCoy had a sixth in the 300 hurdles and 12th in the 110 hurdles. Guervenson Binfield-Smith finished eighth in the 800.

McCoy and Binfield-Smith teamed up with Caleb Cauley and Jimmy Kjellberg for a 12th-place finish in the 4x400 relay. Luke Cross, Chase Renick and Luke Tompkins joined  Kjellberg for a 19th-place showing in the 4x800 relay.

Rowdy Sokolowski and Cameron Youngblood took third and fourth in the pole vault, respectively. Will Mitchum was seventh  in the discus.

The Lady Tigers got six top-eight performances of their own to crack the top 10 in the team standings. Sebby’s squad secured ninth, 25 points behind Bishop Brossart’s championship effort.

The best performance of the day came from the team of Canyon Bourque, Hollis Bourque, Jenna Turley and Kaydence Kindle as they grabbed the runner-up spot in the 4x200. The same group returned for the 4x100, but struggled with an exchange in managing a 17th-place finish. Hollis added an eighth in the 100 and sixth in the 200.

Jade Oakley earned a third-place finish in the discus to go along with her 20th place showing in the shot put. Kynzlee Fox was fourth in the pole vault, and Kaydence Kindle snagged seventh in the long jump. Farris Howard was 10th in the high jump.

“I’m very proud of the athletes,” Sebby said. “They came out and did the things that we had talked about and trained for all year. We had some great performances from multiple athletes, some that weren’t supposed to medal that did, being called state champions for our boy’s in not only the 4x100 but also the 4x200. With that, we also had some missed opportunities as well, but unfortunately, that’s the sport of track and field, and what helps keep this group of athletes a little bit more driven.”