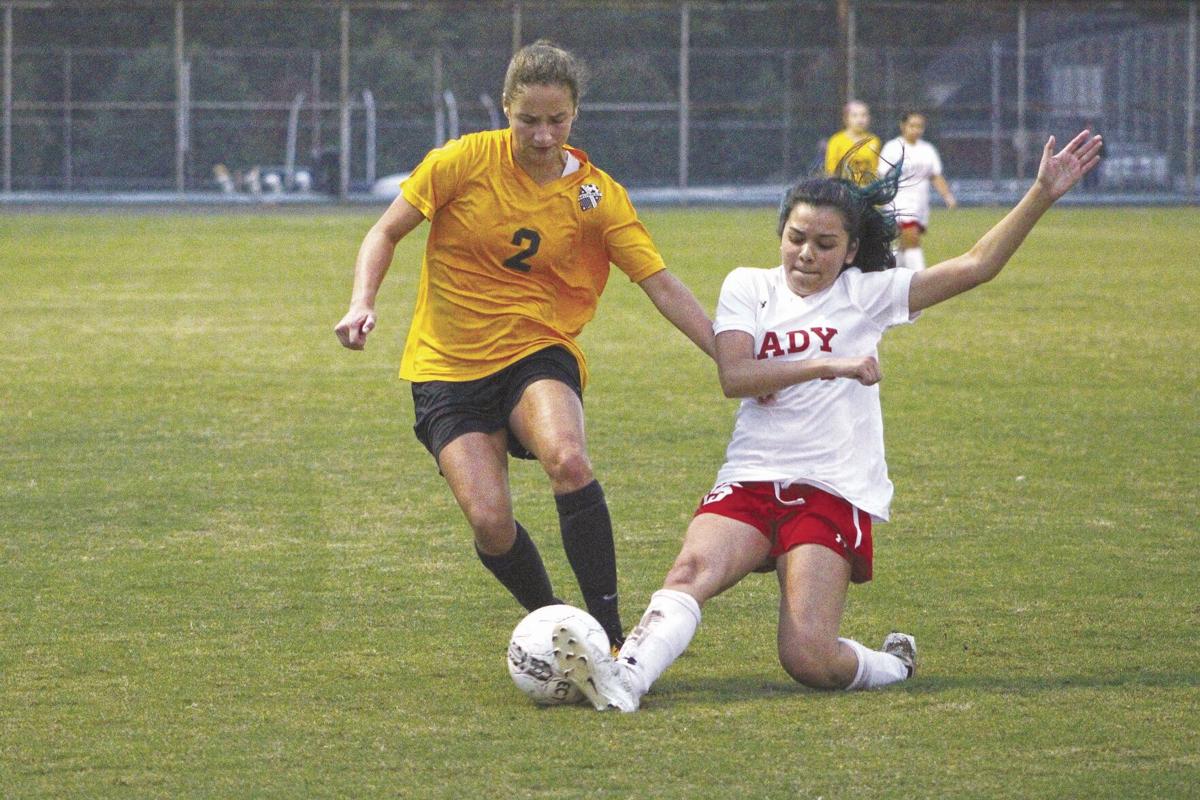 Angela Gierhart dribbles around the slide tackle attempt by the Mayfield defender during the first half of the district tournament game that the Lady Tigers won 10-0. 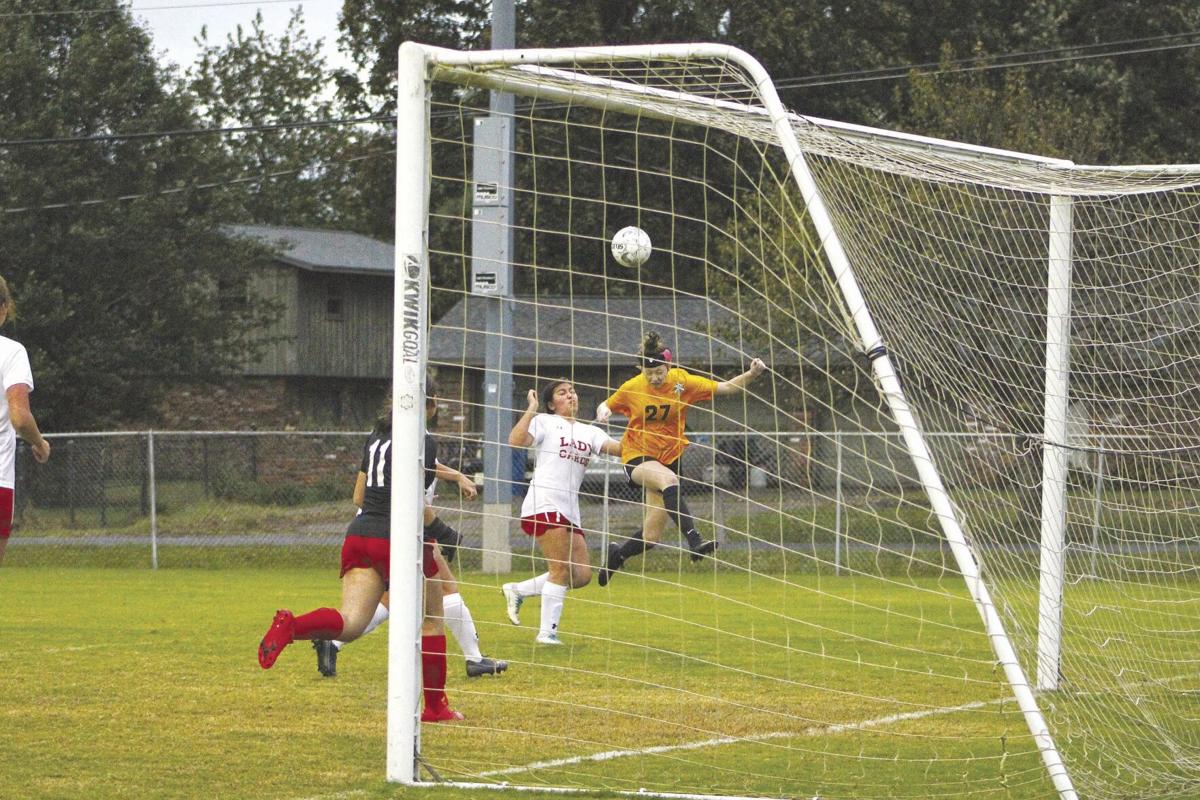 Murray High's Jayln Fuqua nearly puts this corner kick in with her header attempt against the Mayfield Lady Cardinals on Monday night.

Angela Gierhart dribbles around the slide tackle attempt by the Mayfield defender during the first half of the district tournament game that the Lady Tigers won 10-0.

Murray High's Jayln Fuqua nearly puts this corner kick in with her header attempt against the Mayfield Lady Cardinals on Monday night.

MURRAY  — For the third straight year, the Murray High Lady Tigers took down Mayfield in the opening round of the district playoffs with a 10-0 victory.

A deluge of rain dampened the spirits of the Lady Tigers during warmups and may have led to the slow start. Once the offense got going though, the goals came in bunches. Angela Gierhart opened the scoring up and scored the first three for the Lady Tigers.

The Murray State commit seemed headset on taking control of the game which was a welcome sight for Lady Tigers’ head coach Shauna Traylor.

“Angela really took over,” Traylor said. “She was focused the whole time, and she can’t do it all by herself, but I liked seeing that out of her. She was confident and taking people on and finishing, so that was nice.”

After Gierhart’s hat trick, Makira Bomar added her name to the score sheet with a goal in the 28th minute. Then, she scored again in the 30th minute to give the Lady Tigers a 5-0 lead.

Murray looked poised to end the game before the half by invoking the 10-0 mercy rule when Kyra Jones scored to make it 6-0.

Seconds later, Peyton Wray scored, then Abby Elmore. At 8-0 the Lady Tigers offense ran into the only defense that could stop their momentum, the halftime whistle.

The second half lasted just six minutes with Annabel Wilcher scoring to make it 9-0 and Gierhart putting the final touches on her four-goal night to make it 10-0 and end the game.

Now, the Lady Tigers have a quick turnaround as they prepare for their game against Graves County.

Against Mayfield, the slow start was unexpected, but not a death blow. However, Traylor pointed out to her team that tonight’s game against Graves County can’t start that way.

The shortened game will help with the legs for the Lady Tigers, but most importantly they have confidence. The Lady Eagles are 10-3 on the season and 3-1 in district play, with the lone loss in the region coming against Murray High.

It was a tough-fought 1-0 win for the Lady Tigers on the road at Graves County that put the blemish on the Graves County record and the confidence in the minds of every Murray High player.

“I think that gives them some confidence going in,” Traylor said. “They all know that we have to come to play, but in the back of their minds is the thought that we can do this because we’ve done it. Rather than it being a team we’ve played twice and lost twice to, they get to come in and know what they have to do in order to win.”

It won’t be an easy task tonight, but the Lady Tigers are as prepared as they can be and the plan is laid out on how to proceed and succeed.

“We have to bring our ‘A’ game and be focused,” Traylor said. “We have to do certain things correctly and make good tackles and score. And we have to come out strong in the first five minutes.”

A win tonight would send Murray High to the district championship and give them a spot in the regional tournament. To do it, they will have to pull off an upset, but Traylor said that is more than possible.

“I’ve been on the other side of being the top dog and getting beat, maybe not in the district setting, but in the regional setting,” Traylor said. “I told them, ‘I’m ready. I’m ready to be an underdog and beat a top dog, so let’s do it tomorrow.’ I think it can happen if my team comes to play.”

The Lady Tigers and Lady Eagles will kick off at 5:30 tonight at Murray High.