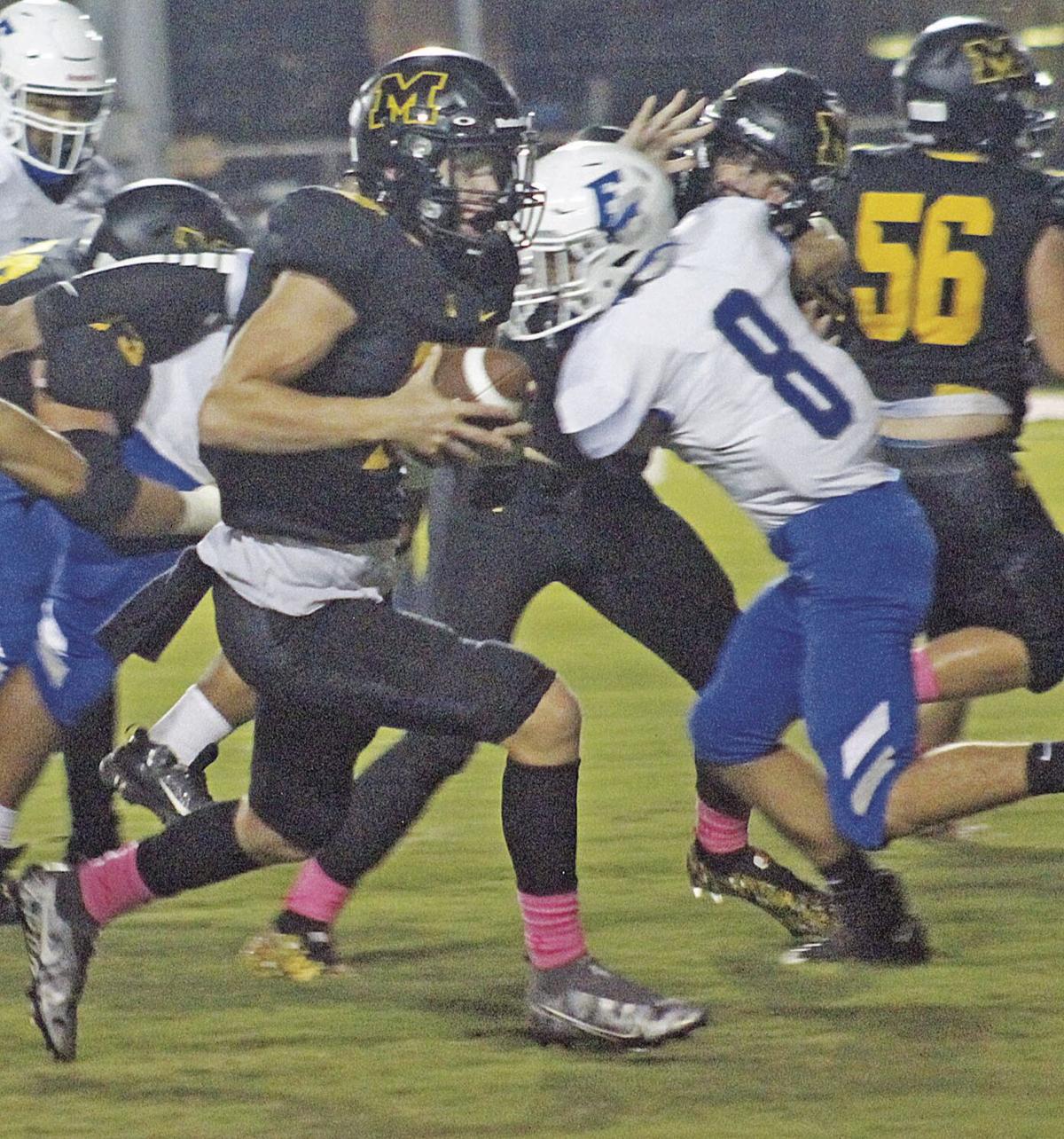 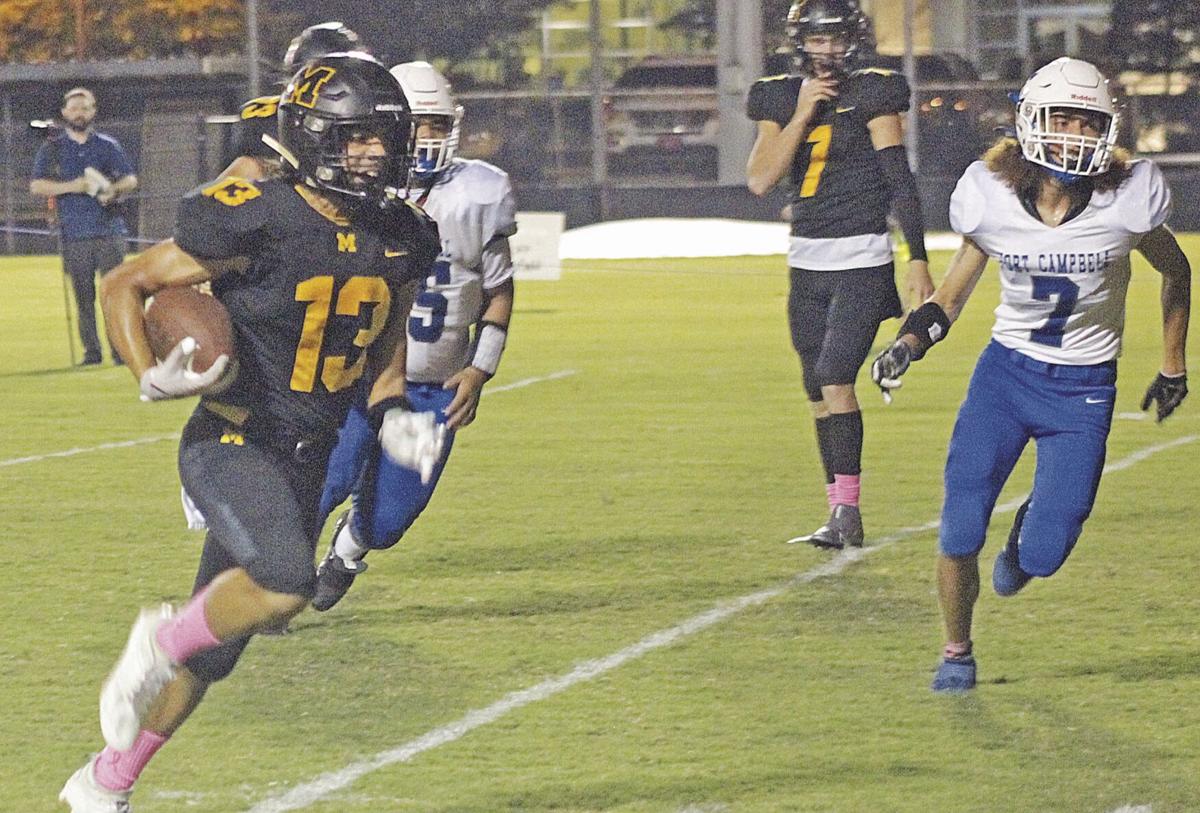 MURRAY — Unless something incredibly strange, like the Earth tilting on its axis strange occurs Friday, it appears Murray High will play a football game that does not require a running clock.

Actually, with the way Murray High’s series with visiting Class 2A 1st District rival Caldwell County has gone the past several years, that would almost seem a certainty. It is a series dotted with close finishes, including two classics from last season.

Murray High won both contests with Caldwell by very thin margins and Tigers Head Coach Darren Bowling said he is seeing no reason for that to change Friday night at Ty Holland Stadium.

“I think this is going to be a four-quarter football game, on both ends,” Bowling said of the matchup that will match two teams ranked in Kentucky’s Class 2A. Murray High is No. 10, while Caldwell is No. 9.

“There’s a lot on the line for both teams, so it’s a big game and I think Caldwell has a really good football team. We’ve seen that from them beating Union County (who beat the Tigers, 53-28 in Morganfield earlier this season before Caldwell beat the Braves, 24-14, in Princeton). That speaks volumes, I’d say.”

Caldwell’s Tigers are entering play Friday night with a 5-3 mark and it would be safe to say, at this point, that they have played the tougher schedule than their counterparts with the same nickname (Murray High is 6-1). Along with a Union team that enters this week ranked fifth in Class 3A, Caldwell has also faced state superpower Mayfield (resulting in a 35-16 loss in Princeton to the second-ranked Cardinals) and a Christian County team that was near 100% healthy on opening night in Princeton.

Christian beat Caldwell by a 24-3 score. Since then, the Colonels have been ravaged by a combination of injuries and COVID-19 protocols, which was the case when Murray High claimed a 56-32 win in Murray three weeks ago.

That Mayfield loss came between the Tigers’ last two wins, which also happened to be against Murray High’s last two opponents — Fort Campbell and Ballard Memorial. Caldwell did not even see the field against Ballard, as the Tigers won that by forfeit when the Bombers were battling COVID protocols. Caldwell did play Fort Campbell, winning 61-6, scoring just three points fewer than Murray High had a week earlier.

Bowling was asked this week if those two games may hurt his team as it gets ready for what is expected to be a hard battle this week.

“It can, definitely, and it’s not something you want,” he said. “I don’t like open dates or bye weeks in the playoffs, while other teams are out there playing. But we really didn’t get to play much with our starters and get a chance to play together as a team. We did get all of our young guys in the game, and I’m proud of that, but you’ve got to live with it.”

However, while the last two Friday nights were short and quite easy for his team, Bowling said life on the practice field has been a different story, and that may help his team for this week’s collision with Caldwell.

“The biggest thing that came from that is we were able to get in two good weeks of practice, and it was one of those things where our guys knew that the practices were going to be the most important part of those weeks, so we’ve had some great practices and I think we’re starting to figure it out on both sides of the ball, and our special teams has come a long way too.”

Like Murray High, Caldwell is a program with a storied history. Both have won state titles with Murray High having won its championships in 1961 and 1974, while Caldwell won titles in ‘63 and ‘98. Both teams have also played for additional state titles once, but lost in close contests.

Last year, Murray High won during the regular season, 41-34 in overtime, at Princeton, then prevailed in the rematch in the Class 2A state playoffs in Murray, 35-28.

A look at the past five seasons these teams have played each other shows not much has changed. In 2019, Caldwell won a thriller in the regular season at Ty Holland, 42-40, but Murray High came back to win, 34-17, in the playoffs at Princeton.

The programs had taken a break from each other between ‘14 and ‘19 with reclassification, but the 2014 series was very interesting. Caldwell came to Murray and took a 31-24 win in the regular season, then the Tigers went to Princeton for the playoffs and turned the tables, 47-28. Murray High turned that trick in 2013 too, losing the regular season game, 42-13, at Princeton, then winning 27-14 in the playoff game at Princeton.

Caldwell prevailed in 2012, winning the regular season game, 24-21, in Murray, then held serve in the playoff meeting, 10-7, in Princeton.

So, for Bowling, who came to Murray High during the summer after winning four Tennessee state titles at Union City, Friday’s atmosphere should be very familiar, and one in which he is most comfortable.

“This is a lot like (his first game this season, The Murray Bank Crosstown Classic with Calloway County). I thought we responded well there and this is going to be the same way. There’s going to be a lot of hype and a lot going on with this one. It’s a big deal,” he said. “Oh, but this is what makes football fun. That’s what Friday night is all about. You’re in a small town, you roll up the sidewalks and come to the game and I’ve been in a lot of these and the fans love them.

“Of course, I come off the field and I feel like I’m going to have a heart attack, but that’s what it’s all about.”

In Caldwell, Bowling said one thing he has noticed is that the Tigers are the polar opposite of his team offensively. Caldwell plays a spread  formation that can send as many as five receivers on passing patterns at a time. The Tigers also will run the ball for balance.

“They do a lot of the screen game and a lot of zones, maybe a few counters, but their quarterback does a good job distributing the ball and does a good job reading the defense,” he said. “Their defensive line will probably be the best we’ve seen so far this season and they’re big up front, so I would suspect that they’re going to be getting after us pretty good.

“You can tell that they are a well-coached team.”

Caldwell also has a weapon that most other teams in western Kentucky do not have the luxury of possessing. This would be Blake Vivrette, the placekicker, who has a big, big leg.

“He’s a D-1 kicker,” Bowling said, describing Vivrette as being eyed by major colleges. “They can cross the 50-yard line and be in field goal range and make a field goal, so you have to account for that as well.”