The Murray High girls track and field team turned in a dominant performance en route to the Class A Region 1 championship on Saturday. 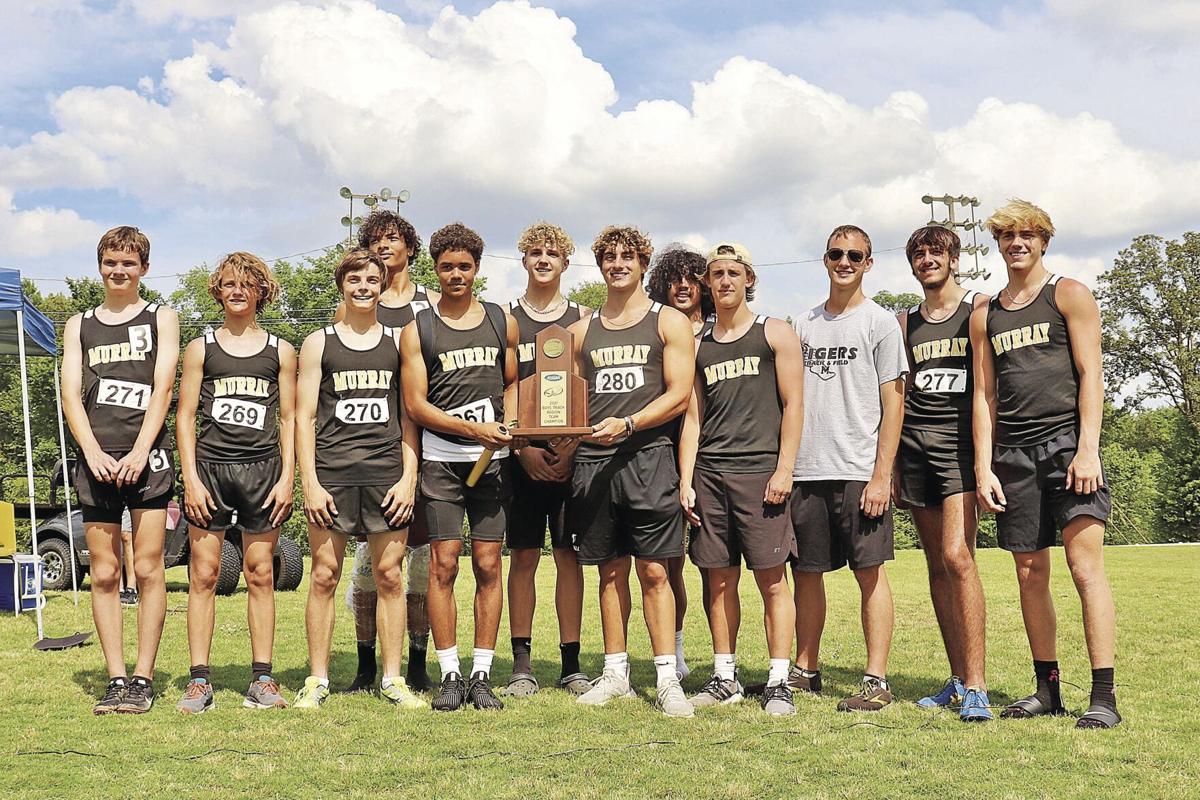 The Murray High boys track and field team poses with the Class A Region 1 championship trophy after securing it in dramatic fashion on Saturday.

The Murray High girls track and field team turned in a dominant performance en route to the Class A Region 1 championship on Saturday.

The Murray High boys track and field team poses with the Class A Region 1 championship trophy after securing it in dramatic fashion on Saturday.

MURRAY — Murray High School hosted 10 other boys and girls track and field teams from across western Kentucky on Saturday for the KHSAA Class A Regional Championships. The Tigers dominated the field in girls’ action as they bested runner-up University Heights by a score of 164-98, while the Murray High boys claimed their regional championship in dramatic fashion.

The Tigers entered the final two events of the day trailing Fort Campbell by eight points in the team standings. Luke Cross did what he was expected to do in the penultimate event of the meet as he grabbed six points for the Tigers by finishing third in the 3200-meter run. Those points meant that the championship rested in the hands of the 4x400-meter relay team. Kainoa Olive, Caleb Cauley, Keaton McCoy and Zavion Carman delivered for their team as they finished in front of the relay team from Fort Campbell to bring Murray High into a tie with the Falcons and give the Tiger boys team their regional championship.

Both Murray High teams qualified 12 athletes for the KHSAA State Track and Field Meet to be held June 10 at the University of Kentucky in Lexington. The boys will compete in eight events in Lexington, while the girls qualified in 12 events. To automatically qualify for the state championship, an athlete (or relay team) must finish in the top two spots in an event at their regional championship. At-large entrants for the state championships are selected from the top 10 performers in the state that did not finish as a regional champion or runner-up.

Coach Krysten Sebby was proud of the way her teams competed.

“I am proud of both teams this past weekend,” Sebby said. “We knew it was going to be close on both sides. University Heights is always competitive and has been close in previous years. Fort Campbell was on the radar as well since they joined our region this year, and had two people in every event. We had some hiccups here and there where we lost some points on both sides like other teams, but both teams still came out and performed to their best, and that is all we can ask for,” Sebby continued. “None of this could have happened without all of the help I and these athletes have had all year. I have had a pole vault coach, throws coach, and two others that have helped all year round, and I think we are all excited to see these athletes compete for one last time this year!”

The Murray High girls won a total of nine events and claimed the runner-up spot in five on their way to a surprisingly easy victory. Hollis Borque and Rachel Trzepacz led the way as each of them claimed first place in two individual events and a relay, while adding a runner-up finish in another event. Borque won the 100-meter dash, 200-meter dash, 4x100-meter relay, and was a part of the 4x200-meter relay team that came in second. Trzepacz added wins in the long jump, high jump, and a runner-up finish in the triple jump to her win as part of the 4x100. Abby Elmore won the 400-meter run, the 4x100, and was a runner-up with the 4x200 team. Jade Oakley claimed regional titles in the shot put and discus, while Kawai Olive nabbed the runner-up spot in the discus. Farris Howard won as part of the 4x100 team, took second in the high jump, and was part of the 4x200 relay team. Kynzlee Fox secured the regional championship in the pole vault, while Erin Faulkner finished third but qualified for the state meet as an at-large competitor. The 4x800-meter relay team of Ashley Vonnhame, Allie Vonnhame, Isabelle Bourne and Leah Jenkins came in second place with Ashley Vonhamme also qualifying for state as a member of the 4x200 relay team.

The Tiger boys needed every point they could muster en route to hoisting their championship trophy. Sebastian Lawrence led the way for Murray High by winning the regional championship in the shot put and discus, while Xavier Biggers won the 100, and Rowdy Sokolowski took top honors in the pole vault. Gaige Jacobs placed third in the discus and fifth in the shot put, but qualified for the state meet in both throws. Cameron Youngblood was the runner-up in the pole vault. Cross rounded out the Tigers qualifying for the state competition as an individual. His third-place finish in the 3200 was good enough to secure an at-large berth. For their heroics, the aforementioned third-place 4x400 team qualified for the state meet as did the 4x100 team of Brendan Dahnacke, Biggers, Olive and Christian Seavers. The 4x200 team of Biggers, Olive, Seavers and Cauley rounded out the state qualifiers for the Murray High boys with a third-place finish.