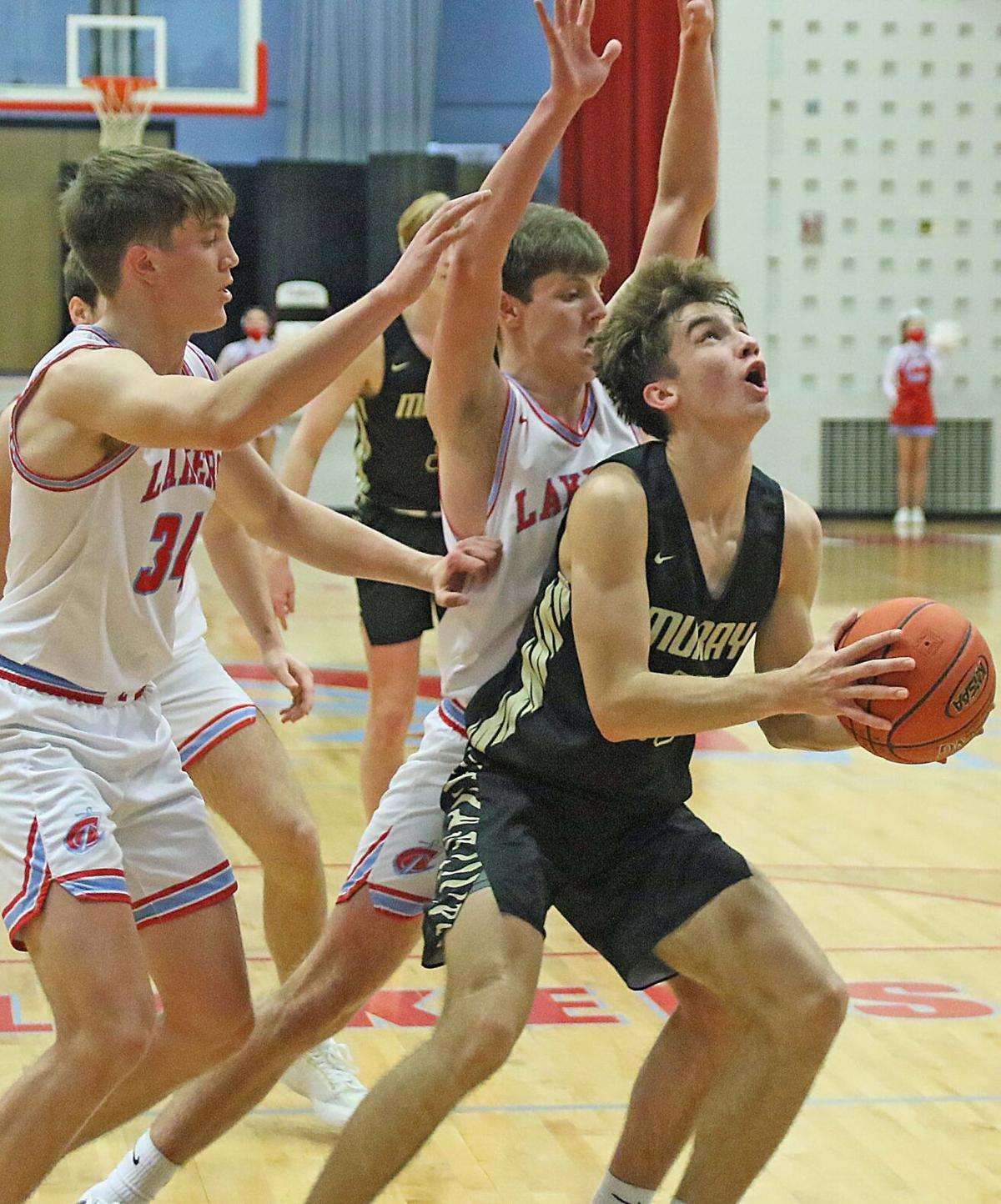 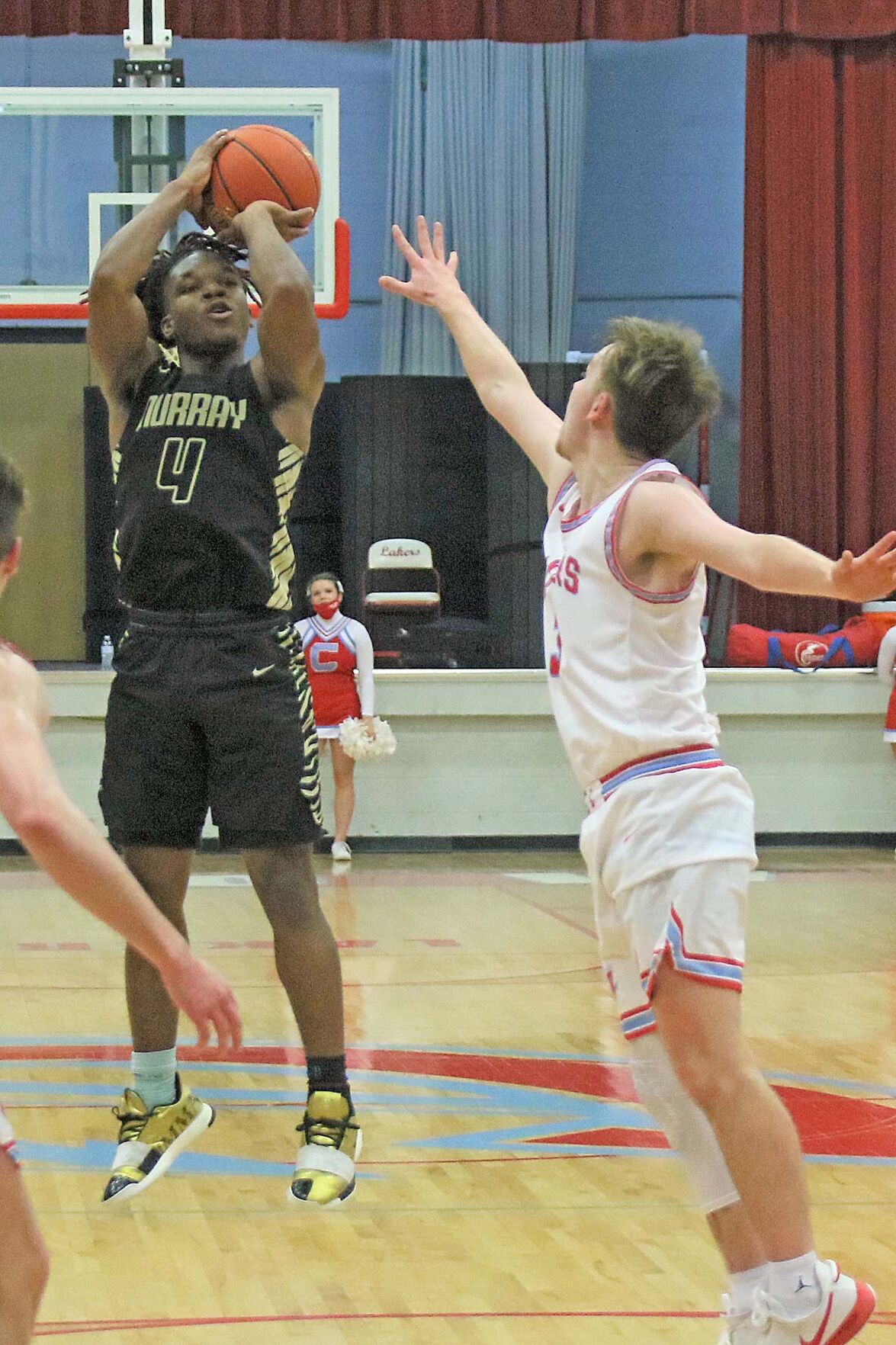 Tiger junior guard Charqwan McCallister pulls up for two of his team-high 16 points over Laker senior guard Jackson Chapman in Murray's 52-47 overtime victory over Calloway County in the Crosstown Classic.

Tiger junior guard Charqwan McCallister pulls up for two of his team-high 16 points over Laker senior guard Jackson Chapman in Murray's 52-47 overtime victory over Calloway County in the Crosstown Classic.

MURRAY — The Calloway County Lakers and Murray High Tigers needed extra time to grind out a victor in the second installment of the hardwood Crosstown Classic, with Murray High (12-6) completing the regular-season sweep of Calloway  (6-10), 52-47 at Jeffrey Gymnasium Monday night.

The game was a defensive struggle for both teams most of the night, as the Lakers were able to stay in the game by holding one of the region’s best players, Tiger sophomore guard Grant Whitaker, to only two  first-quarter field goals and eight total points on the night.

The Tigers jumped out to a 16-4 lead early, and looked to be on track to repeat its performance earlier in the season performance that saw the Tigers cruise to a 23-point win in Taylor Gymnasium. However, the Lakers ended the opening quarter with a 4-0 run, capped by senior forward Evan Garrison’s jumper at the buzzer to keep the Lakers within striking distance — 16-8 —  after one quarter.

Calloway would pull as close at seven points in the second quarter — 21-14 — after junior forward Zach Hudgin’s reverse layup, but the Tigers would close out the half up nine points, at 25-16.

Coming out of halftime, not only did the Lakers put the defensive clamps on the Tigers, but they also outscored Murray High by a  17-6 count on the offensive end, thanks to a 5-0 run to start the half and a nine-point outburst from Laker junior forward Matthew Ray. This helped bring the Lakers to within three points, at 26-23, at the five-minute mark of the 3rd quarter. Tiger junior guard Charqwan McCallister stopped the run with a right-wing 3-pointer, but Laker junior forward Drew Hudgin scored a basket down low, followed by a 3-pointer and  foul-line jumper for Laker junior forward Matthew Ray. Then, Zach Hudgin’s steal was followed by a deep buzzer-beating 3-pointer for Laker senior guard Jackson Chapman that gave the Lakers the 33-31 lead and all the momentum, heading in to the final period.

The Tigers outscored the Lakers 12-10 in the final period, as the teams traded baskets and battled defensively. Tiger senior guard Gabe Taylor sank a 3-ball from the left corner with just over two minutes remaining to give the Tigers a 42-41 lead. Garrison would then calmly hit two free throws with under a minute to play to tie the game at 43-43. Then, a Whitaker jumper in the lane just missed to the left as time expired to push the game into the extra period.

Taylor hit another huge 3-pointer with 3:22 left in the overtime to give Murray High the lead, then a Garrison free throw and driving bank-shot from Laker senior guard Jarrett Darnell tied the game at 46-46 with just under two minutes left. McCallister would then hit two free throws and assist on a basket to Tiger junior forward Trey Boggess to give Murray High all of the points that they would need to win the game, finally finishing the Lakers off 52-47.

The Tigers were led by McCallister’s 16 points, five rebounds and three assists. Whitaker still helped the Tigers with eight rebounds and five assists to go along with his eight points. Boggess was all over the court again, totaling 13 points, seven boards and two assists, while Taylor would finish 3-for-7 from long range with nine points. Senior forward Dijon Miles had four points and freshman center Zavion Carman had two points.

For the Lakers, Ray led the way with 14 points, Garrison had 11, Chapman and Darnell each had eight points, Zach Hudgin had four points and Drew Hudgin had two.

The Tigers head to Marshall County tonight and the Lakers host Trinity (Whitesville) on Friday night.