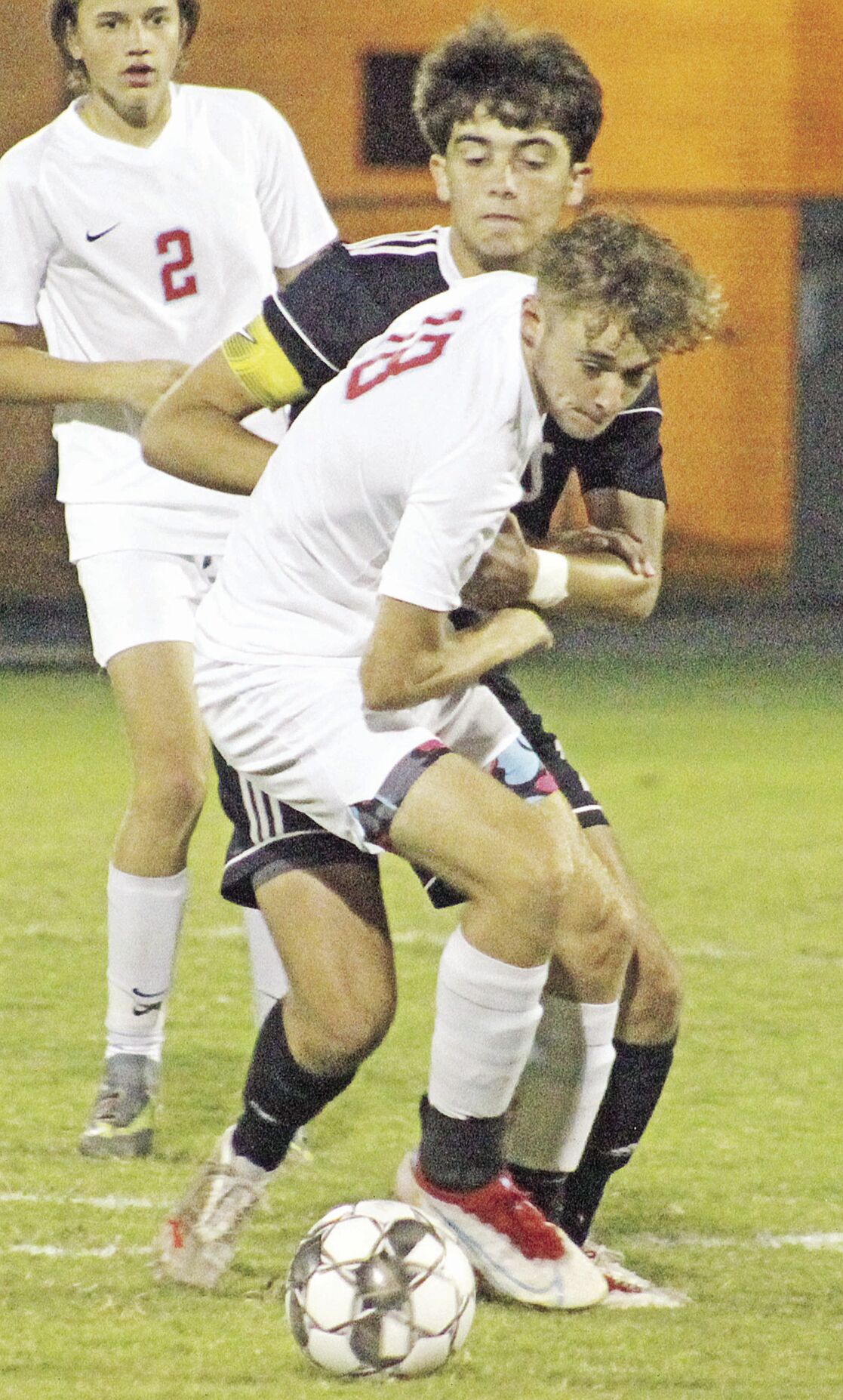 Calloway County's Hunter Prince (18) and Murray High's Chase Renick (black) engage in a physical battle for the ball as Calloway's Jude Bazzell moves in from behind Tuesday night during The Murray Bank Crosstown Classic boys soccer clash at the Mallary France Soccer Complex, won by Calloway, 2-1. 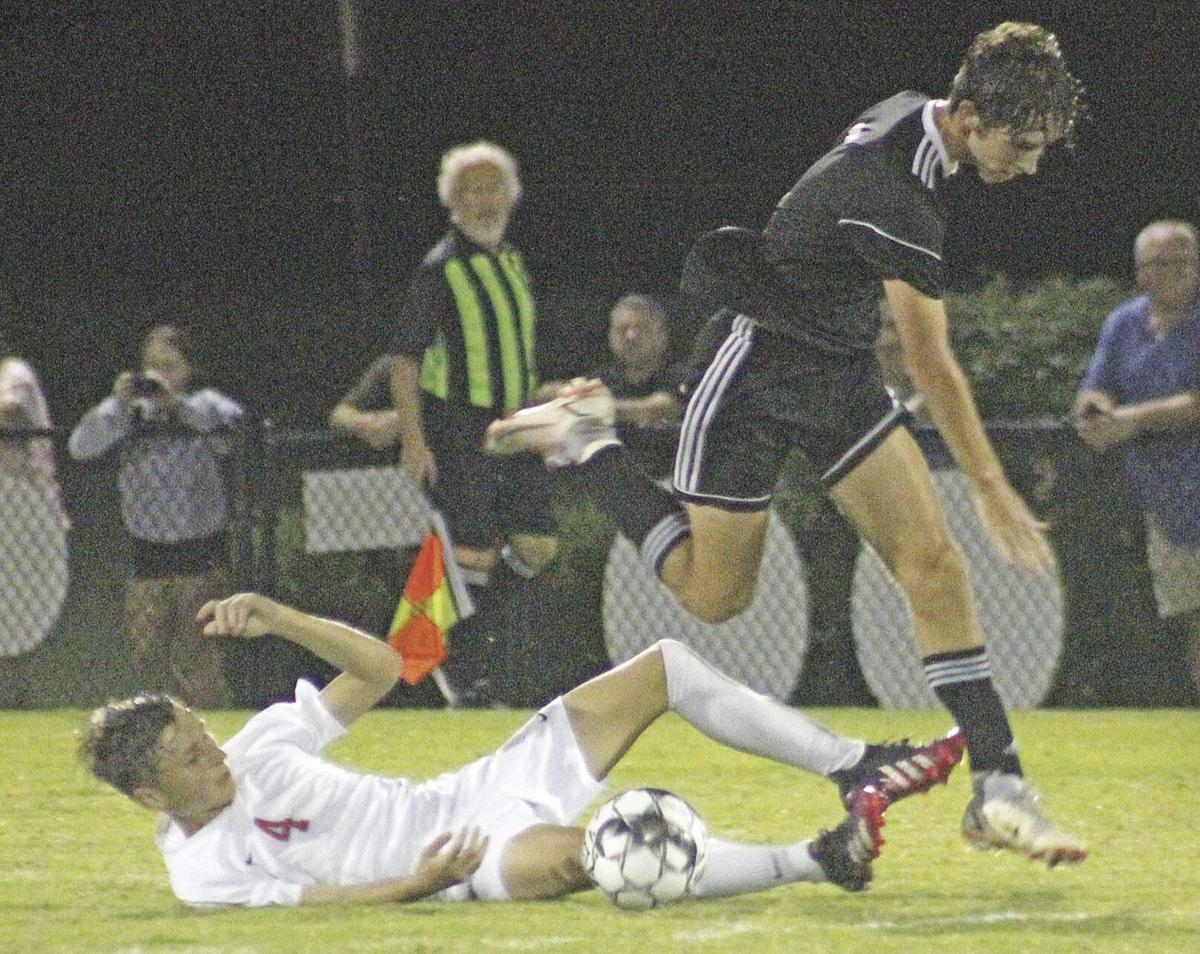 Calloway County's Hunter Prince (18) and Murray High's Chase Renick (black) engage in a physical battle for the ball as Calloway's Jude Bazzell moves in from behind Tuesday night during The Murray Bank Crosstown Classic boys soccer clash at the Mallary France Soccer Complex, won by Calloway, 2-1.

However, it was perhaps rather timely that it had to rise from the canvas, so to speak, about 24 hours  earlier on Senior Night at the Jim Nix Soccer Complex, having fallen behind by three goals in the opening five minutes to visiting 2nd District foe Mayfield. Calloway then proceeded to score five goals the rest of the way to win.

Tuesday, at the Mallary France Soccer Complex, the Lakers did it again, scoring twice in the second half to come from behind and defeat Murray High for the second time this season, 2-1.

“ I told the guys tonight that, outside of the first four minutes (Monday night with Mayfield), we played our best half of soccer in that game. So we went from our best half of the year to perhaps our worst half of the year tonight and, in the first, they made us pay,” said Calloway Head Coach Evan Pierce, whose team went to halftime down 1-0 Tuesday after senior midfielder Trey Boggess headed in a big throw-in from classmate Connor Blalock with 18:36 left in the first half.

“But the fact that we rallied around and found a way to get back in it, then pull it out, shows the resiliency of this group, and that’s important because we’re not always going to be leading the game. You’re gong to have to find your confidence and fight your way back and I’m starting to tell with these guys that, if we do get down, it doesn’t faze us as much as it has in the past.”

Using that calm demeanor, the Lakers (10-2, 5-1 in 2nd District play) quickly drew even in the second half as junior Kristian Agesen-Pagh,who has become one of the main scoring threats for this team, lived up to that reputation again. He scored after  senior Garrett McGrew started a run from near midfield with a perfect pass that senior Hunter Prince then used to drive the ball deep into the Murray High zone allowing Agesen-Pagh to establish position and ram into the net with 34:36 left in the match.

About 10 minutes later, it would be Agesen-Pagh getting the game winner off a feed from  senior Christian Reider. However, as is typical of any Crosstown Classic, the drama was not over.

Murray High (7-6, 2-4) would put the Lakers on the defensive the final 10 minutes of the match and had about four chances that easily could have tied it. However, the combination of Calloway keeper  Jacob Akin (seven saves, including two huge ones at the end) and his defense and midfield, time after time, stopping the Tigers’ advances by getting the all out of the Calloway zone and forcing Murray High to regroup, using time in the process, eventually preserved the win.

Murray High Head Coach Jared Rosa said he was not necessarily disappointed with his team’s effort, but he said he wished the rest of the match had resembled the last few minutes.

“For four or five minutes, particularly, we were able to get some good chances, and if we had five more minutes, we possibly could’ve gotten one,” Rosa said. “We can’t give them, or any other teams we face, 30 and 40-minute head starts.

“I wouldn’t say it’s that we’re doing anything necessarily wrong, but our chemistry needs to start clicking. The thing is I’ve seen them do it. We just couldn’t put anything together tonight in the second half and you’ve got to credit them. They kind of adjusted and we tried adjust to them but it just wasn’t there.”