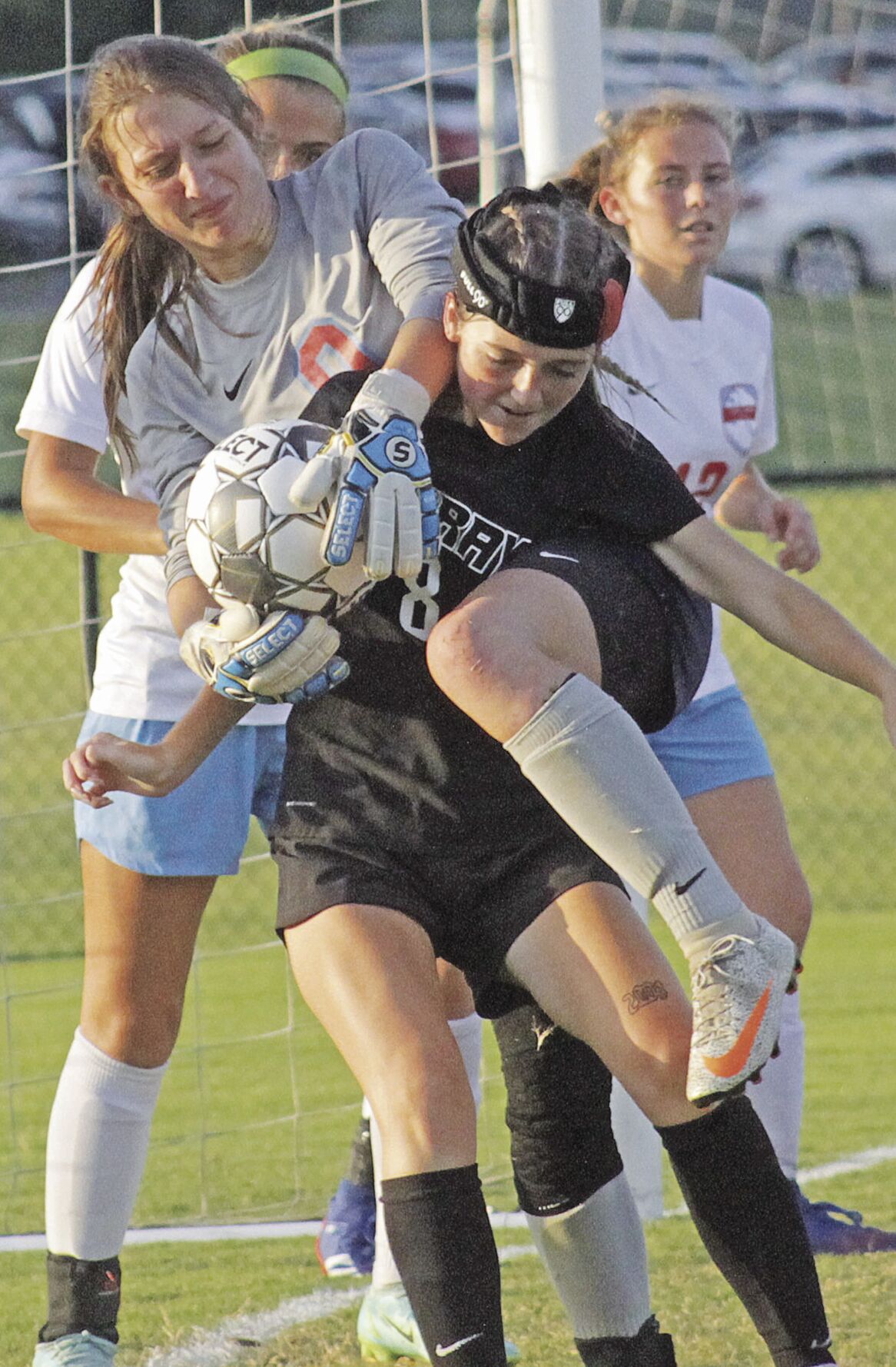 Calloway County goal-keeper Sunny Clark manages to maintain her grip on the ball after catching it, then colliding with Murray High's Kyra Jones (8) Tuesday during The Murray Crosstown Classic at the Mallary France Soccer Complex, won by Murray High, 4-1. 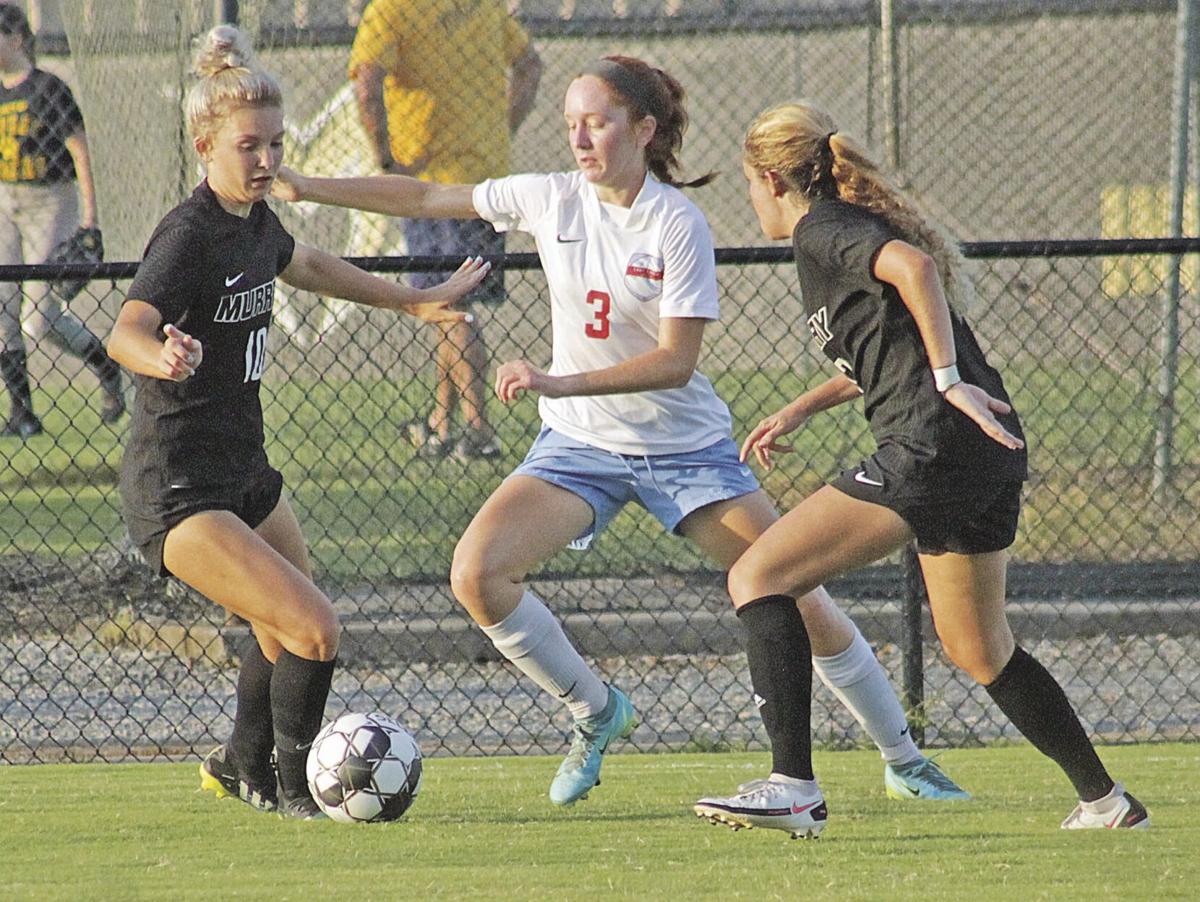 Calloway County goal-keeper Sunny Clark manages to maintain her grip on the ball after catching it, then colliding with Murray High's Kyra Jones (8) Tuesday during The Murray Crosstown Classic at the Mallary France Soccer Complex, won by Murray High, 4-1.

The most prevalent of those probably had to do with Calloway, who was beaten 6-0 by the Lady Tigers in the first meeting at the Jim Nix Soccer Complex a few weeks ago,a time when it was still firmly in the grip of COVID-19 protocols. The Lady Lakers were now almost totally healthy and it had showed in the form of a six-match winning streak they carried into Tuesday.

And make no mistake, the Lady Lakers looked much better in their second go-round with their 2nd District rivals. However, two things have not changed, and that is that the Lady Tigers still have a little more size and speed in the key areas and no player exemplified this more than freshman forward Malaika Gachoka, who tallied all of her team’s goals in a 4-1 win at the Mallary France Soccer Complex.

“She was ready tonight and, honestly, I’ve been looking and hoping for some other people to score some goals,” said Murray High Head Coach Shauna Traylor, whose team had two huge goals from its go-to player, junior forward Kyra Jones in a 2-1 win over University Heights Monday night in the Kentucky All-A Classic Sectional 1 title match at Hopkinsville.

“Kyra’s been doing great, but if there’s ever a time where Kyra is going to be covered up or maybe she’s off, we have to have other players step up.

“We actually have a few different options (at the front) and there are some games we can utilize (the usual starters) to their potential but there are other games we may need to go with a different lineup. Our players also know that if something starts working,we need to keep going.”

Gachoka’s first goal came after Calloway, who rarely threatened the Lady Tigers (7-5, 3-3 in the 2nd District) in the first match, had seemed to get the better of the action for much of the first half. Teammate Peyton Wray, who also has become quite dangerous as of late as a scorer, drove into the Calloway zone and found a streaking Gachoka in the middle for a shot that Calloway keeper Sunny Clark did deflect but not enough to prevent going into the net for a 1-0 lead with 14:37 left before halftime.

That is how it stood until about 31 minutes were left in the second half when Wray sent a well-placed corner kick into the Lady Laker box and Gachoka popped in a rebound for a 2-0 lead. Then, Wray’s foot caused trouble again as she sent a long direct kick into the zone and once again Gachoka was there to finish at point-blank range for a hat trick and a 3-0 lead with about 20 minutes to go. Gachoka’s last score came as she outran the Calloway defense after a long ball to the middle to score with 13:07 left.

However, the Lady Lakers  (7-7) 2-4) were able to get on the scoreboard this time as KayBre Gamble scored on a rebound off a Bailey Provine corner kick with 3:46 left to avoid the shutout.

Still, while she was encouraged by her team’s effort, Calloway Head Coach Savana Thielen said she was less than pleased with how the second went.

“We come into halftime with it 1-0, then we give up three goals that I felt were easier than the one they got in the first half,” Thielen said. “That was a matter of us not keeping our head. We weren’t wining 50/50 balls in the second half like we had won them in the first half, just little things. And they were outhustling us, plus we weren’t adjusting to the long ball, which is how they scored most of those goals.

“Now, the girls were working hard but they’ve just got to be a step above if we’re going to go into districts and make a difference.