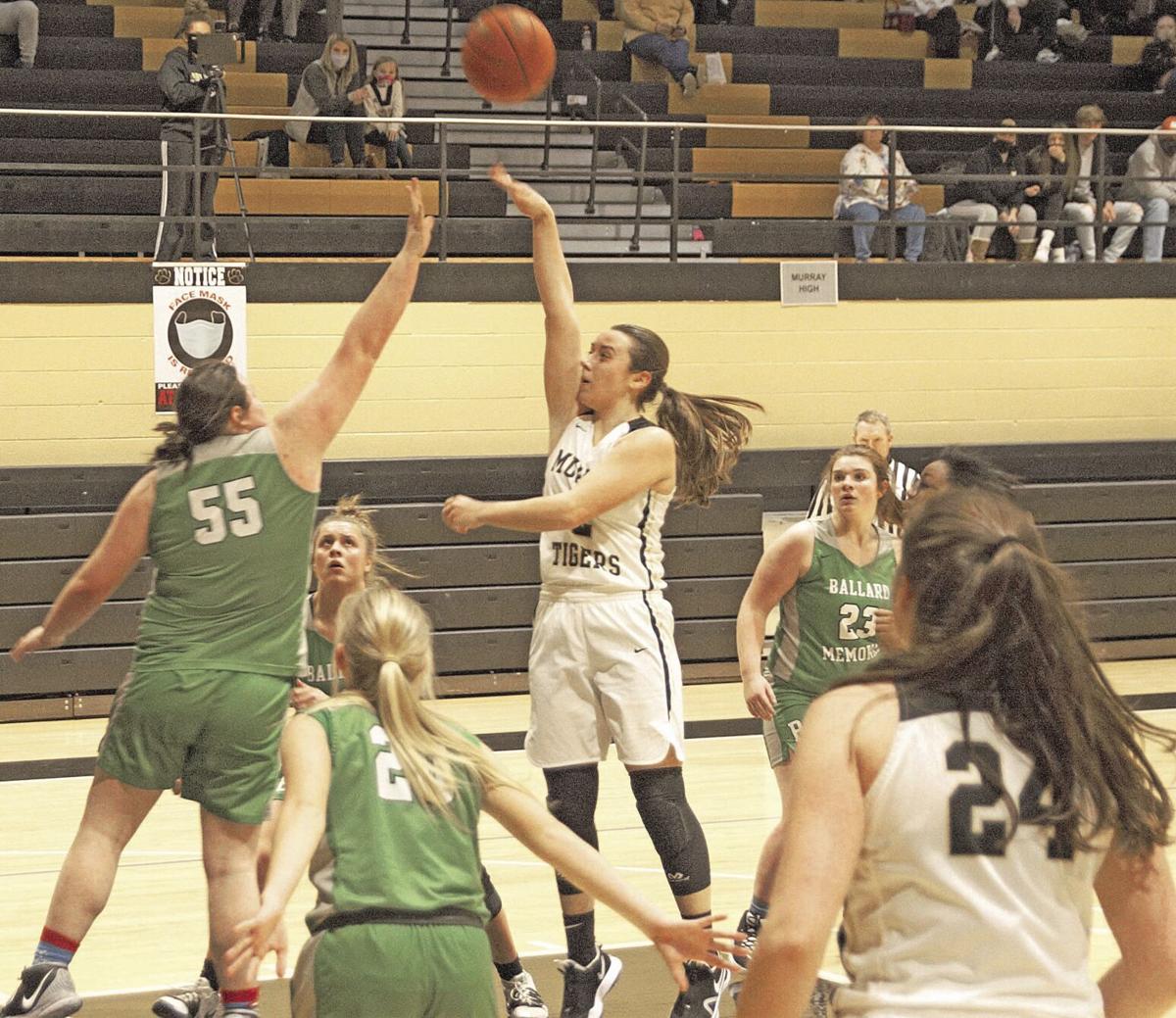 Murray High senior guard Makenzie Turley tries a shot in the lane last week against Ballard Memorial. Turley had seven points  Monday night in the Lady Tigers’ 49-9 win over Paducah St. Mary in the first round of the Region 1 All-A Classic. 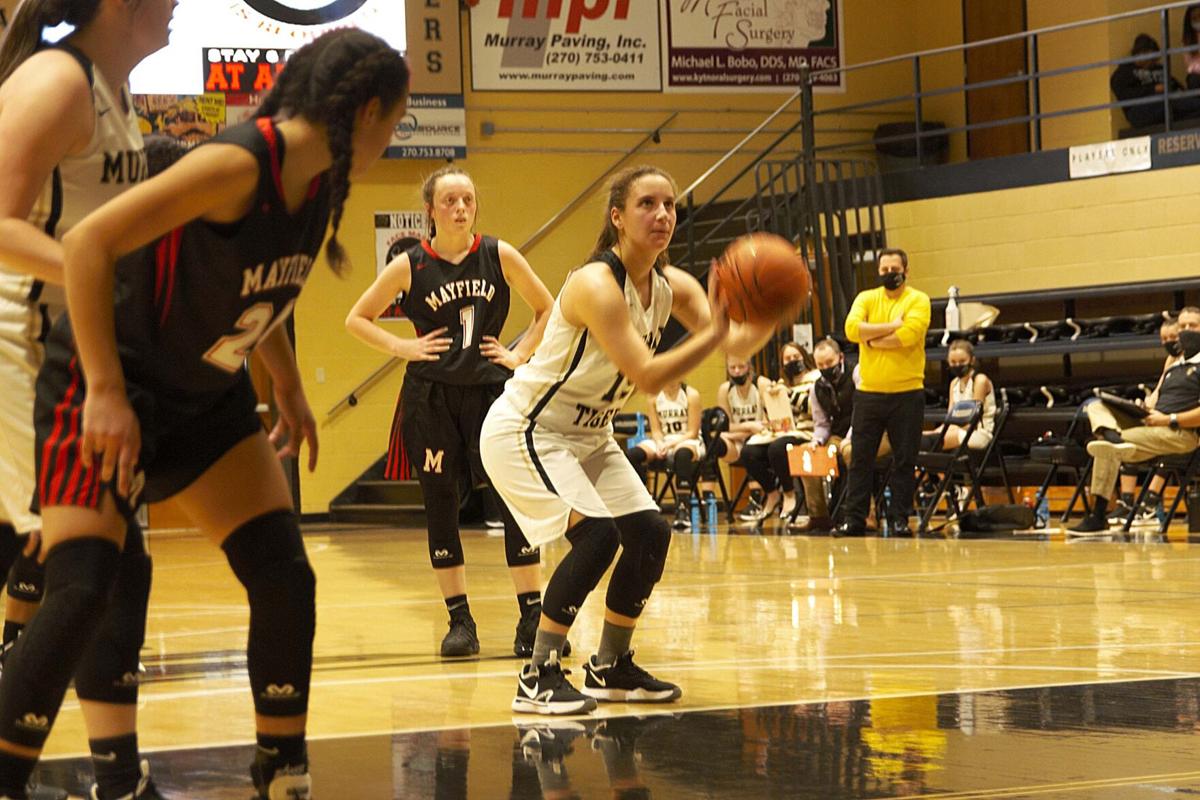 Murray High senior guard Angela Gierhart prepares to launch a free throw for the Lady Tigers Monday night. Her team-high 25 points wasn’t enough, however, as Murray High fell to the Mayfield 46-42 in the season-opener Monday night at Taylor Gymnasium.

Murray High senior guard Makenzie Turley tries a shot in the lane last week against Ballard Memorial. Turley had seven points  Monday night in the Lady Tigers’ 49-9 win over Paducah St. Mary in the first round of the Region 1 All-A Classic.

Murray High senior guard Angela Gierhart prepares to launch a free throw for the Lady Tigers Monday night. Her team-high 25 points wasn’t enough, however, as Murray High fell to the Mayfield 46-42 in the season-opener Monday night at Taylor Gymnasium.

MURRAY — Murray High has won nine straight Region All-A Classic titles and showed Monday night that it is quite interested in making it 10.

The Lady Tigers hit visiting Paducah St. Mary early and often with a suffocating defense that allowed them to build a big lead that eventually grew large enough to require a running clock by the middle of the third quarter. From there, it was an easy cruise to the  finish line and a 49-9 victory at Taylor Gymnasoum that moved the Lady Tigers (2-1) into Thursday night’s semifinals at Mayfield.

“We felt like we wanted to be more aggressive and that it would give us some confidence in the half court defensively. We were very keyed in with the matchups and had a very specific game plan with what we wanted to do,”said Murray High Head Coach Tom Foust.

Murray High held St Mary to just three points, while forcing 15 turnovers, in the first half and headed to the break up 20 points.

The onslaught started with a 1-2-2 full-court trapping defense that led to numerous turnovers for the Lady Vikings on both sides of the time line. Then, the Lady Tigers decided to change that look and settled into the half court, but that did not mean St. Mary was having any easier of a time finding shots.

“We stopped pressing them about midway through first quarter (Murray High led 10-2 by then) and we kind of sat back to where we were helping big time in the gaps, but we wanted a lot of ball pressure and they were trying a lot of ball screen stuff, which we knew they were goung to do,” Foust said. “They were having a very tough time getting shots on us.

“We did miss some easy looks early (preventing the lead from growing even larger) and they were packed in tight, but I told the girls that I didn’t want us out in three-point land and I wanted to mash it inside and we were trying. In fact, we may have forced it a little too much (Murray High had three turnovers of its own), but that was the game plan, so I can’t get too upset with them.”

Senior guard Angela Gierhart and sophomore center Alyssa Daughrity did find the bottom of the basket enough to score 10 points each in the opening half. Daughrity led all scorers Monday as he finished with 14 points, giving her consecutive games in double digits as she had 18 in a win over Ballard Memorial Thursday night.

“We knew this was coming,” Foust said of Daughrity. “We were kind of heavy (at center) last year and she didn’t get as much time as I wanted. But you can see that she’s got a chance to do something special.”

Gierhart ended with 13 points.  Foust said she is the Lady Tigers’ main defensive stopper as well.

“She works her tail off on both sides of the ball and she wants the toughest defensive matchups and she’s our go-to for a lot of things. We put a lot on her and she always accepts the challenge,” Foust said, looking ahead and knowing that the leadership of fellow seniors Makenzie Turley  and Amy Sue Tish will be key for the Lady Tigers to go to Mayfield later this week and claim a 10th straight All-A region title.

The next step starts at 6 p.m. Thursday against Hickman County, a two-point winner Monday night against Ballard Memorial. All of the remaining games will be at the Mayfield Sports Arena on the campus of Mayfield High School.

“We set our goals before each season and we talk about it and our idea is, ‘We don’t expect it, but we’re going to work for it,’” Foust said. “We’re not acting like, just because we’re Murray, we’re automatically going to roll the ball out there and cut down the nets.

“We know we have to fight for it. There’s a tradition there and this is another year and another team, and it’s exciting to get our sophomores and freshmen a lot more experience. Unfortunately, this year, it’s right at the beginning of the year and we don’t get things to lead up to it, but that’s how it is for everybody.

“Two games and we’re right into the All-A and we don’t have any scrimmages either. So we know we’re not going to be at our best and this isn’t as good as we’re going to be. But we hope we’re good enough right now.