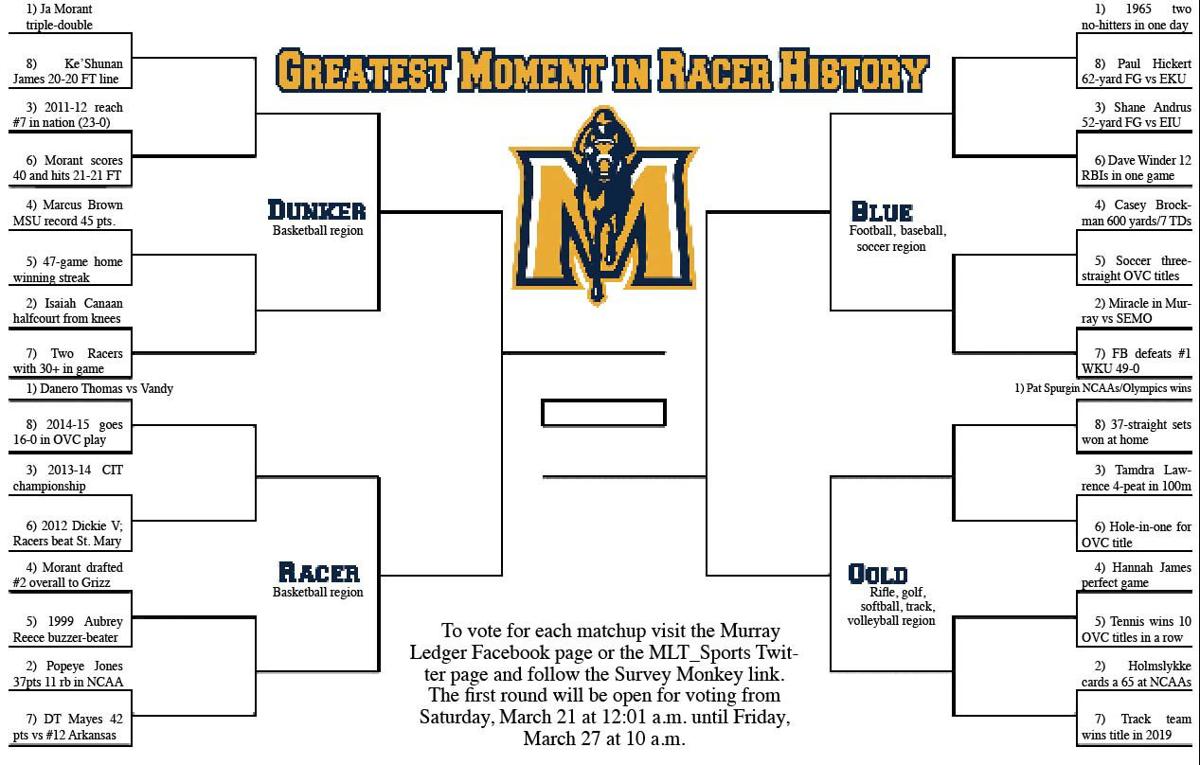 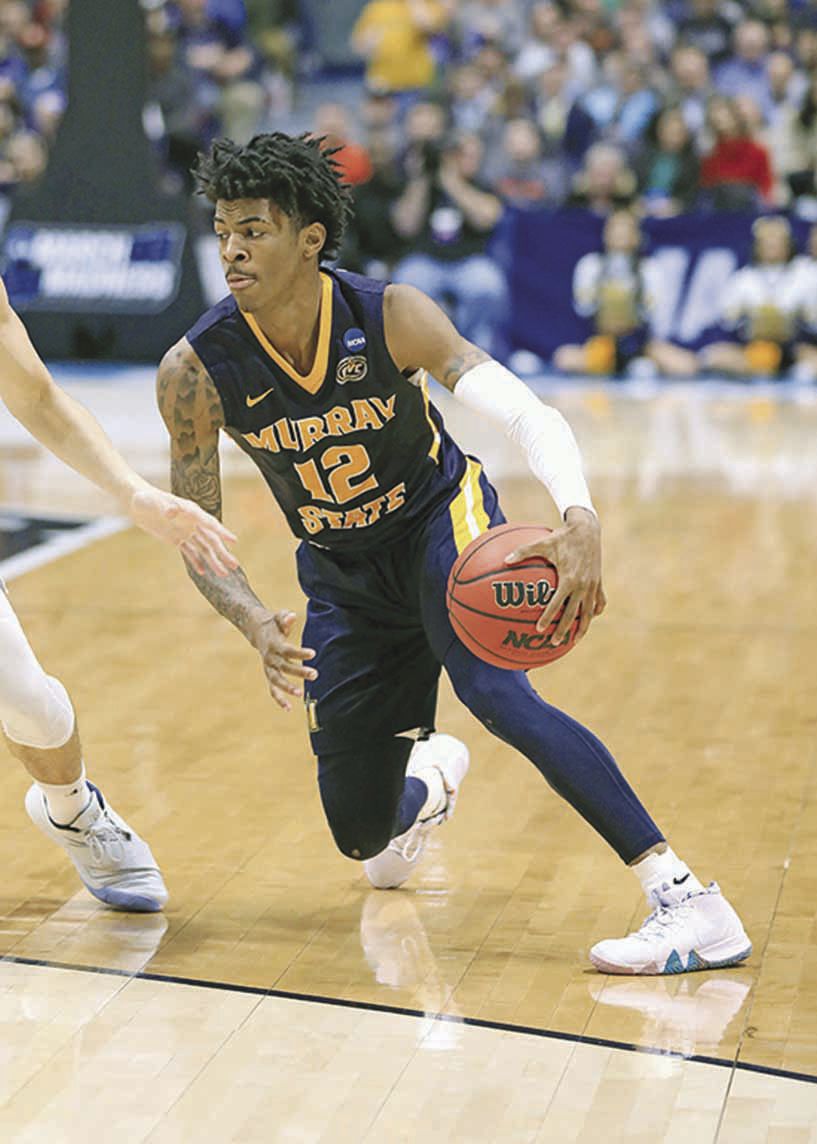 Ja Morant recorded a triple-double against Marquette in the 2019 NCAA tournament and takes the one-seed in the Dunker Region. 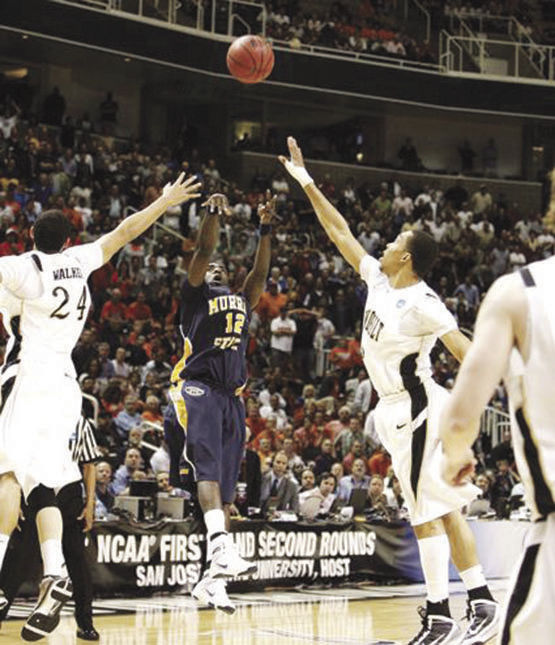 Danero Thomas releases his game winner against Vanderbilt defenders Andre Walker and Jermaine Beal in the final seconds on March 18, 2010, in the first round of the NCAA Tournament West Regional at HP Pavilion in San Jose, California. Thomas’s shot gave the Racers their first NCAA Tournament victory since 1988 and second in school history up to that point.

Ja Morant recorded a triple-double against Marquette in the 2019 NCAA tournament and takes the one-seed in the Dunker Region.

Danero Thomas releases his game winner against Vanderbilt defenders Andre Walker and Jermaine Beal in the final seconds on March 18, 2010, in the first round of the NCAA Tournament West Regional at HP Pavilion in San Jose, California. Thomas’s shot gave the Racers their first NCAA Tournament victory since 1988 and second in school history up to that point.

MURRAY — Our Greatest Moment in Racer History list was compiled with assistance from multiple sources and is meant to be as all-inclusive as possible, but is by no means all-encompassing. More moments were considered but ultimately the list had to be cut to 32 and these were the finalists.

As for the seeding, this was done as carefully as possible and although there will be some areas of disagreement, the great thing about it is that just like the NCAA tournament the lower seeds are far from out of it. Your votes will decide which moment moves on as we attempt to find the Greatest Moment in Racer History.

Voting will take place online via our Facebook page and Twitter. Each matchup will be voted on separately and eventually a champion will be crowned. The Final Four will each earn a special story as we reach the end of the tourney. To vote for each matchup visit the Murray Ledger Facebook page or the MLT_Sports Twitter page and follow the Survey Monkey link. The first round will be open for voting from Saturday, March 21, at 12:01 a.m. until Friday, March 27 at 10 a.m.

In the Dunker (basketball) region, Ja Morant’s triple-double against Marquette in last year’s NCAA tournament drew the top-seed. Morant finished with 17 points, 16 assists, and 11 rebounds in the opening round win in Hartford, Connecticut as the 12-seeded Racers upset the 5-seeded Golden Eagles, and became just the 12th player to record a triple-double in the NCAA tournament.

Coming in as the two-seed arguably the most improbable shot ever made. Everyone remembers where they were when Isaiah Canaan hit the half-court shot from his knee with the shot clock winding down against SEMO. The play made ESPN’s SportsCenter #1 play and still stands as one of the most ridiculous shots made inside the CFSB Center.

Next up, as the three-seed is the 2011-12 Racer basketball team that won 23-straight games and reached #7 in the nation. The run included wins over #21 Memphis, Dayton, Western Kentucky, and a double-overtime nail-biter against Southern Mississippi.

In at the four-seed is Marcus Brown and his Murray State record 45 points from 1995. The Racers won the game over Washington (Mo.) 108-87 and Brown ended the season as number one in scoring average for a single season with 26.4 points per game.

Our five-seed is one the greatest home winning streak in Murray State history. The 47-game streak that spanned from 1996-2000 started inside of Racer Arena and carried over into a new arena before finally ending in a loss to SEMO. Before the loss in 2000, the streak was the longest in the nation, proving the Racers had a true home-court advantage.

For the six-seed, we look back to another Morant performance. This one came in January of 2019 and saw Morant score 40 points against SIUE, however, the impressive part was his free-throw performance. Morant set a school record going 21-21 from the free-throw line in the win, 82-72.

A combo performance earned the seven-seed, as Marcus Brown and Vincent Rainey became the first and only teammates in Racers history to each score 30 points or more in a game. Brown and Rainey both finished with exactly 30 in the 87-81 win over UT-Martin.

As the eight-seed is our only women’s basketball moment thanks to Ke’Shunan James. Arguably one of the best players to ever wear the Murray State uniform, James, set a school record against Northern Kentucky when she went 20-20 from the free-throw line. The previous record for made free throws was held by Amber Guffey who went 18-19 in a 2007 game.

In the Racer (basketball) region, our top-seed is another unforgettable moment. Danero Thomas’s 15-foot jump shot as time expired to defeat Vanderbilt in the first round of the NCAA tournament in 2010. This moment recently celebrated a 10-year anniversary and remains in the minds of many Racer fans.

Popeye Jones comes in as the two-seed with his 37 points and 11 rebounds in an NCAA tournament loss to #4 Michigan State in 1990. The sophomore helped guide the Racers to overtime where they ultimately came up short, but as a 16-seed in the tournament, they were the closest team to pulling off the 16-vs-1 upset before UMBC did it in 2018.

For the three-seed the 2013-14 Racers basketball team earned the spot thanks to their CIT championship. The Racers defeated Yale behind 24 points from tournament MVP Cameron Payne.

Morant makes the tournament again, this time as a four-seed for the moment he brought Racer Nation when he was selected number-two overall in the NBA Draft by the Memphis Grizzlies. It is the highest a player from Murray State has ever been drafted.

The next moment comes in as the five-seed and it’s Aubrey Reece’s buzzer-beater in 1999 to give the Racers the 62-61 win over SEMO for the OVC championship. His shot from 10-feet sent the Racers to the NCAA tournament for the third-straight year.

At the six-seed is a celebrity moment that many Racer fans still talk about to this day. In 2012, the Racers played St. Mary in an ESPN BracketBusters game with Dick Vitale (Dickie V) in attendance. The Racers won the game 65-51 and improved to 26-1 on the season.

Our seven-seed comes in via DT Mayes and his greatest scoring performance in a Racers jersey. In 1997, Mayes scored 42 points on Christmas Day and the Racers defeated the #12 Arkansas Razorbacks in Puerto Rico.

The last moment to make the basketball side of the bracket is a streak from 2014-15 and it takes the eight-seed. The 2014-15 team set a school and conference record with 25 straight wins, including a 16-0 conference mark.

In the Blue (football, baseball, soccer) region, the top seed comes to us from way back in 1965 via the Murray State baseball team. In a feat that will likely never be matched, the Racers had a pair of pitchers throw no-hitters in two wins over Austin Peay. Jerry Anderson had a perfect game against APSU in a 17-0 win and George Dugan threw a no-hitter in the second game in a 1-0 win.

The two-seed is a football moment that didn’t seem possible at halftime. Down 31-0 at one point, the Racers fought back to take the lead over SEMO 34-31 with under two minutes left to play. The Redhawks scored to retake the lead with 20 seconds left, but Malik Honeycutt returned the ensuing kickoff 79-yards to give the Racers a 40-38 win.

In as the three-seed is Shane Andrus who drilled a 52-yard field goal as the clock expired to defeat Eastern Illinois, led by quarterback Tony Romo. With the win, the Racers won a share of the OVC regular-season title and the tiebreaker with the Panthers to reach postseason play.

Another local legend, Casey Brockman, comes in as the four-seed for his incredible performance in 2011 against Tennessee State. Brockman threw for 600 yards and seven touchdowns in a 58-27 win over the Tigers. It still stands as the single-game record for yards and the seven touchdowns ranks second all-time behind his own eight touchdown day against UT-Martin in 2012.

Next up is the six-seed and an individual performance inside the batter’s box that still hasn’t been matched since 1986. Dave Winder batted in a Murray State record 12 RBIs in 28-16 win over Iowa.

As the seven-seed, we’ve got one of the biggest upsets in Murray State football history and by a wide margin to boot. In 1980, the Racers defeated #1 Western Kentucky 49-0 to complete a perfect 6-0 home record and finish 9-2 for the year.

Lastly is the eight-seed and it comes from the foot of Paul Hickert. In 1986, Hickert converted a 62-yard field goal against Eastern Kentucky before the half expired. The kick still stands as the longest made in Murray State history.

In the Gold (rifle, golf, softball, track, volleyball) region, we lead off with the one-seed that just so happened to have won a gold medal. Pat Spurgin had quite the year in 1984 for Murray State as she won the NCAA championship and then a gold medal at the Olympics in air rifle. It’s no wonder why the Murray State rifle range is named after her.

Coming in at the two-seed is a women’s golfer for an incredible feat. At the NCAA regional, Linette Holmslykke carded an incredible 7-under 65 in the second round to skyrocket from 34th to first in 2019.

The three-seed is another incredible woman from the Murray State athletic program. Tamdra Lawrence became the first person in the OVC to win the outdoor 100-meter dash OVC championship for four-straight years. Her last win helped the Racers bring home a team title.

At the four-seed, it’s Hannah James of the Murray State softball team for doing something that had previously never been done in Racers history. Last season, she became the first player to ever pitch a seven-inning (full game) perfect game. There had been perfect games previously but they were all ended early due to the mercy rule.

In at the five-seed is a historic run of greatness for the Murray State men’s tennis team. From 1980-89, the Racers won 10-straight OVC championships under the direction of head coach Bennie Purcell. It still stands as the longest championship streak in Murray State history.

For the six-seed, we go back to the world of golf, this time with the men’s team. In 2008, the Murray State men won the OVC championship thanks to Nick Newcomb’s first career hole-in-one during the final round. The Racers ended up winning the title by one-stroke.

The next moment comes to us via the track team. In 2019, the Racers won the outdoor OVC championship for the first time since 1992. Several first-place finishes gave the Racers all the point they needed to knock off SEMO by 13.5.

Our final moment in Racer history comes from the volleyball court. From 2014-15, the Racers won 37-straight sets including an OVC title where they didn’t drop a single set in Racer Arena.