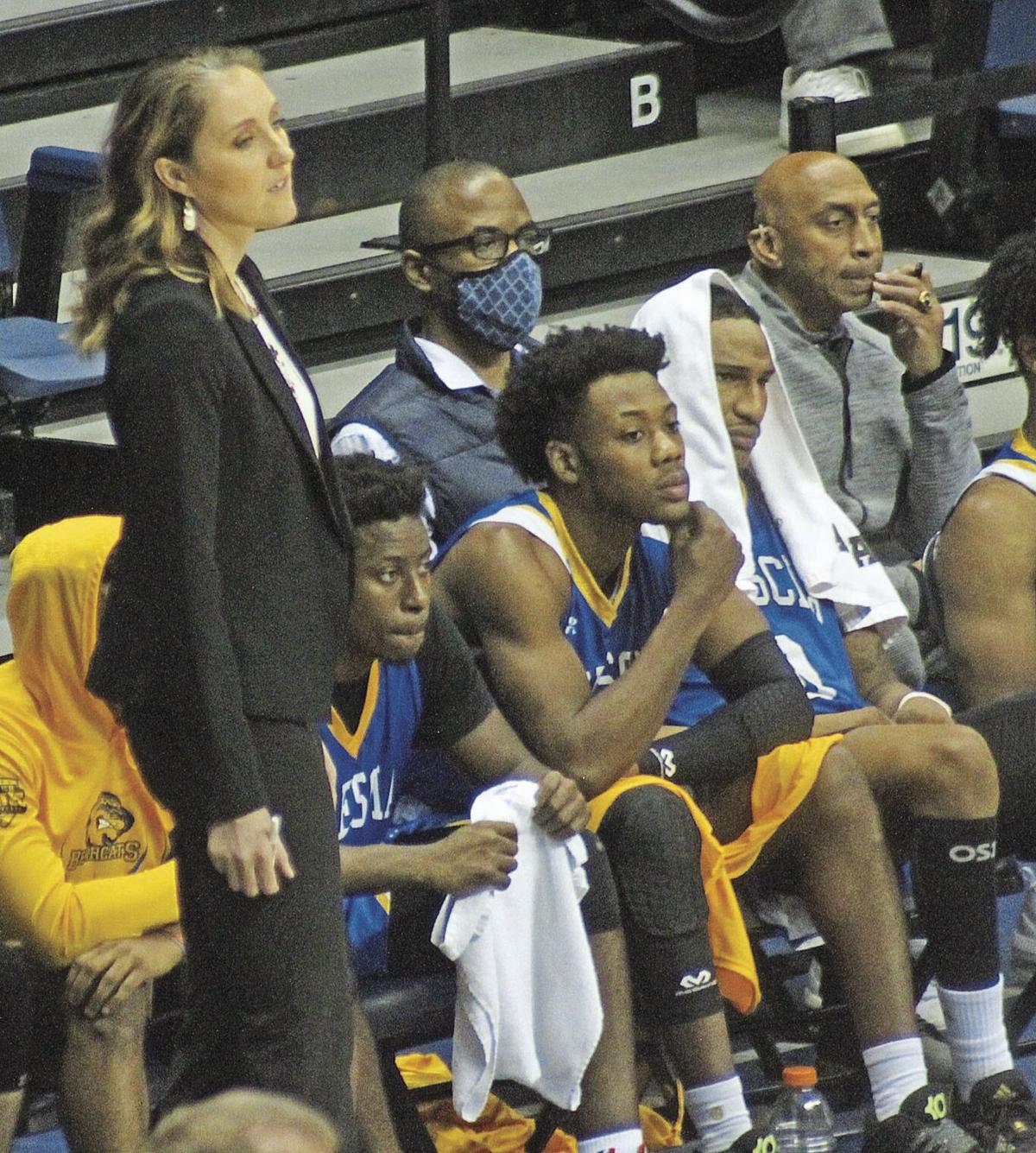 Brescia Head Coach Sarah Gayler watches her Bearcats perform Monday night against Murray State in a men's exhibition contest at the CFSB Center in Murray. Gayler became the first woman in the 80-plus-year history of the National Association Intercollegiate Athletics to serve as the head coach of a men's team in a game when the team took the floor Monday. 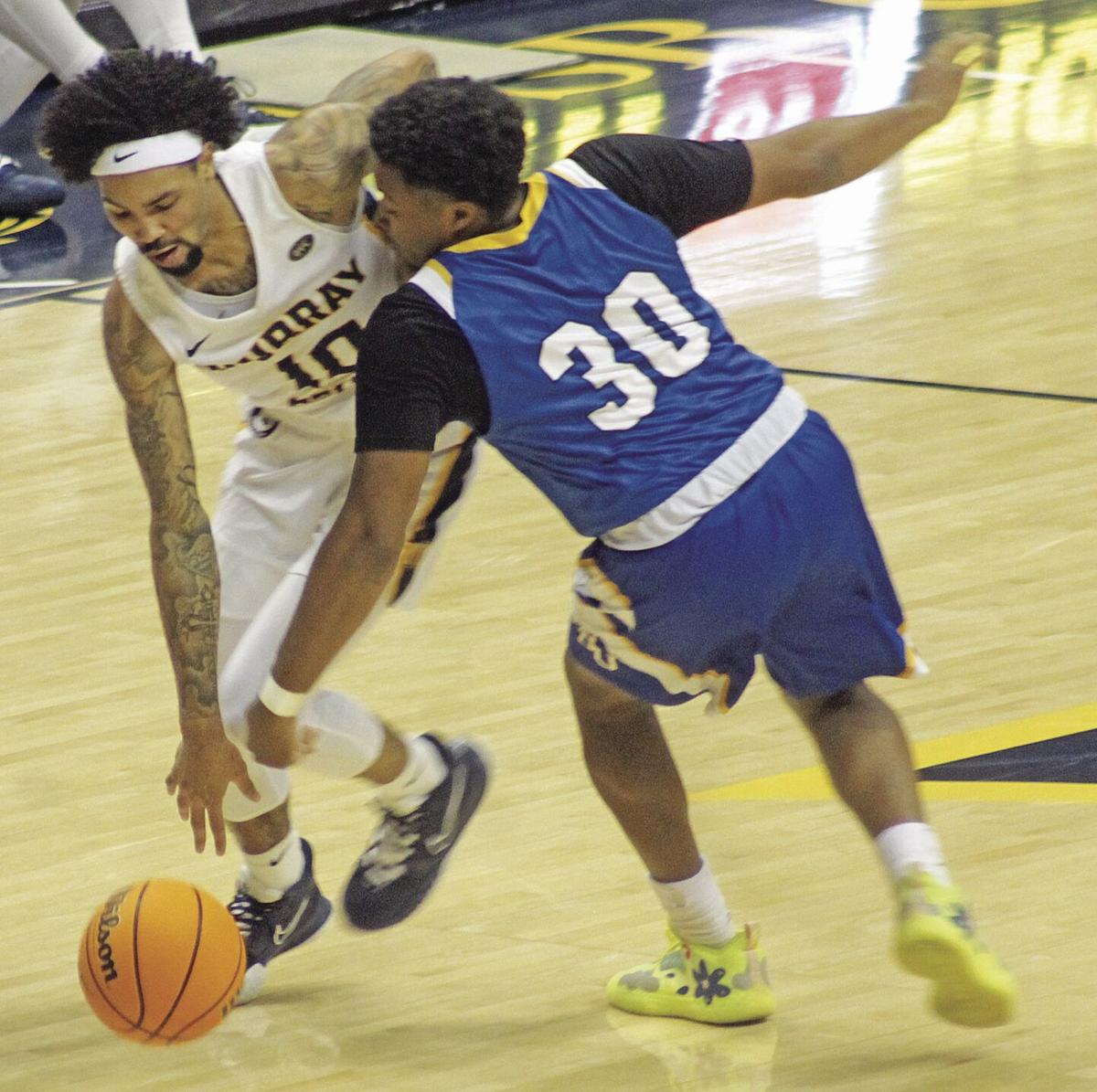 Brescia Head Coach Sarah Gayler watches her Bearcats perform Monday night against Murray State in a men's exhibition contest at the CFSB Center in Murray. Gayler became the first woman in the 80-plus-year history of the National Association Intercollegiate Athletics to serve as the head coach of a men's team in a game when the team took the floor Monday.

MURRAY — Working with men in the game of basketball is nothing new to Sarah Gayler.

For the past two seasons, in fact, Gayler served in basketball operations for the Milwaukee Bucks of the NBA, as in the Milwaukee Bucks who won the franchise’s second-ever NBA world championship earlier this year. And yes, her place within that organization allowed her the privilege of holding the Larry O’Brien Trophy after the Bucks defeated the Phoenix Suns in six games during the summer.

However, other women had previously been involved with NBA franchises. It was not as if she was actually the head coach.

On Monday night, that changed, though not at the NBA level. However, when Gayler led the Brescia University men’s squad into battle with host Murray State, everyone inside the CFSB Center witnessed history. Monday was the first time in the history of the National Association of Intercollegiate Athletics, which has been in existence since 1940, that a woman has been the head coach of a men’s basketball team, and Murray State took notice of the occasion.

“Once they announced that (during the pregame introductions), I was a little shocked,” Gayler said after Monday’s game, which ended with the Racers taking an easy 95-41 win in the exhibition game. “You know, it is an honor (to be the one to make history), but I really didn’t come onto the floor thinking that.”

However, she seemed touched by the efforts of the host school to acknowledge the occasion.

“It was a great night and I appreciate (local media and Murray State officials) for what you’ve done for me and our players as well,” she said, noting that she still is in a proverbial whirlwind as she is getting used to the surroundings at the Owensboro campus. “This is just Week 5 of me as their new coach (as well as the school’s athletics director) and they’re having to get used to a new system, plus I came in really late.

“I arrive on the campus and I’m like, ‘Where’s my team?’ Then, I finally started meeting some of the players and it’s like, ‘Hi! My name is Sarah. What position do you play?’

Murray State Director of Athletics Kevin Saal said having Murray State’s name as part of this history-making achievement should be considered an honor.

“Murray State is thrilled to play a small role in honoring Coach Gayler and Brescia in establishing important history in the game of college basketball,” Saal said Tuesday. “Murray State University is honored to host Coach Gayler and her Brescia men’s basketball program in the CFSB Center. On behalf of Racer Nation, we wish Coach Gayler, her staff and student-athletes all of the best for many seasons to come.”

A Murray State team that seems strongly determined to significantly improve on a disappointing 13-13 season a year ago probably was not the most opportune first-game test for the Bearcats and this was displayed early in the game. The Racers promptly jumped from the starting blocks and hit Brescia with a 12-0 run to open the game.

However, one of two signature points in the game for Brescia soon followed as the Bearcats righted themselves and went on their own 9-2 run to cut the lead the five.

“The fact that they did come back and were able to have that toughness about them even though they were gut-punched like that shows that they have that in them. They have that fire,” Gayler said, adding that her team was excited about facing an established program such as Murray State.

“We had anticipated this and it was a game the guys had looked forward to playing. I think their nerves got to them a little but it was a really good experience for them as a group.”

The other memorable moment for the Bearcats came in the late stages when it was able to score 16 points in the final 10 minutes. It also included a moment where Murray State Head Coach Matt McMahon decided to openly praise one of the Bearcats for a strong display of rebounding as he uttered “That’s how you block out!”

“The last crew we had in there played really well,” she said. “I think we finished with three freshmen and two sophomores and, in that last 10 minutes, we did execute our offense really well. I was trying to get my starters to execute the offense all night.”

In the Bearcat starters’ defense, though, Murray State was very stingy on defense, allowing Brescia to make only 36.2% of their shots from the field. The Racers also forced 25 turnovers, which led to 34 points, many of which were on fast breaks.

Gayler said she was quite impressed with the Racers. In fact, she countered McMahon’s on-court praise of her team’s rebounding with some glowing comments of her own.

“Murray State does a great job defensively and that is one thing I want our own team to mimic,” she said. “Actually, we do a lot of defensive drills, but I think Murray State showed us another level.

“You guys are going to do really well this season and I look forward to watching you guys in games.”

After the game, McMahon talked about Gayler’s part in Monday’s match and said it brings to mind another woman who coached basketball in the past.

“You’ve got remember I grew up in Pat Summitt Country over in East Tennessee,” McMahon said of the former UT Martin star player who went on to become the first coach, man or woman, ever in NCAA Division 1 basketball to reach 1,000 wins. “You don’t think Pat Summitt could have coached men’s teams and won a lot of games? I guarantee you she could have.

“I think it’s awesome and I have great admiration for (Gayler), not only as a head coach, but also as their director of athletics. I can’t imagine the work load there.

“You know, I think, sometimes, the most dangerous way of thinking is, ‘It’s always been done that way.’ I think what you find is good players who are about winning, when it comes to coaches, they respect coaches who work hard, who are committed to getting their players to play better, who have expert knowledge of the game and care about their players off the court. I’m excited for her.”