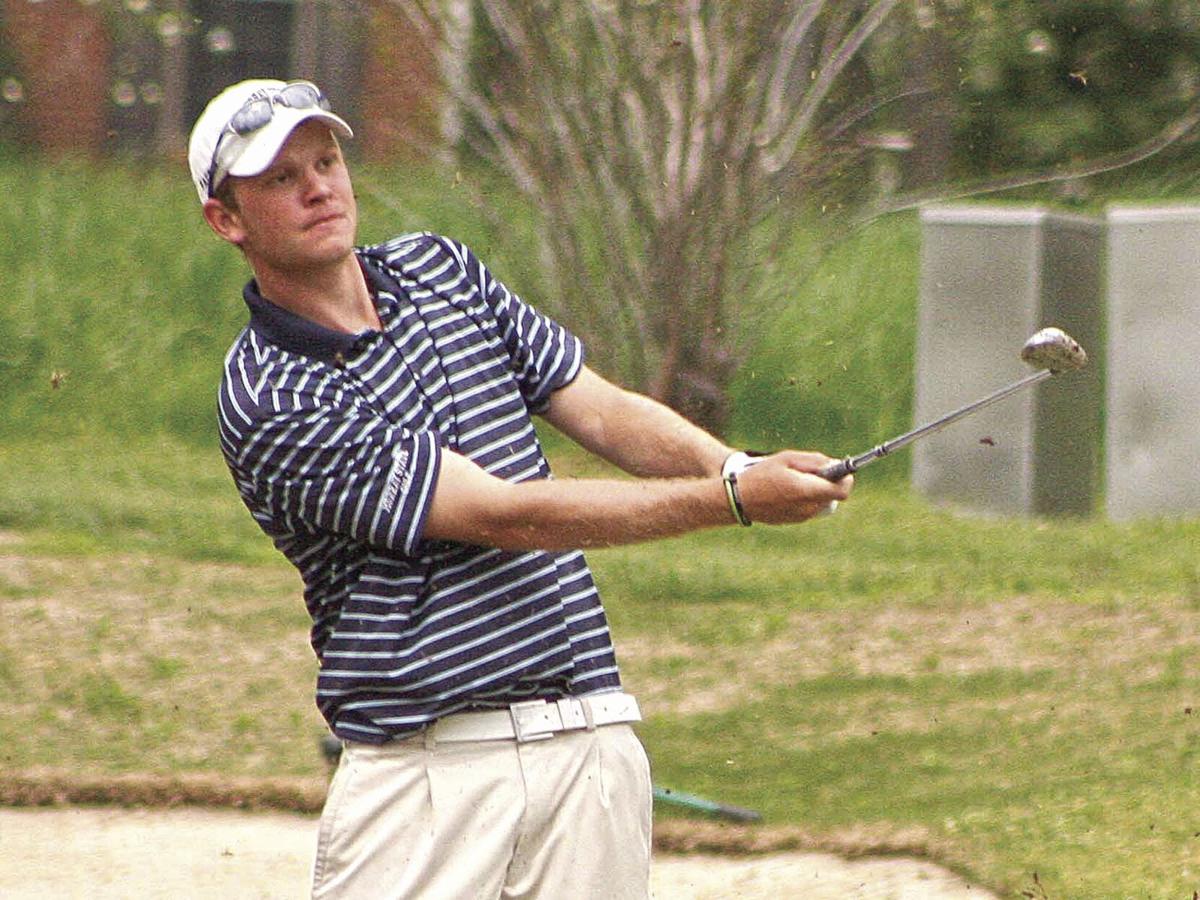 Murray State golfing alumnus Jared Wolfe follows through on a shot out of the sand during a tournament when he was performing with the Racer men's program. 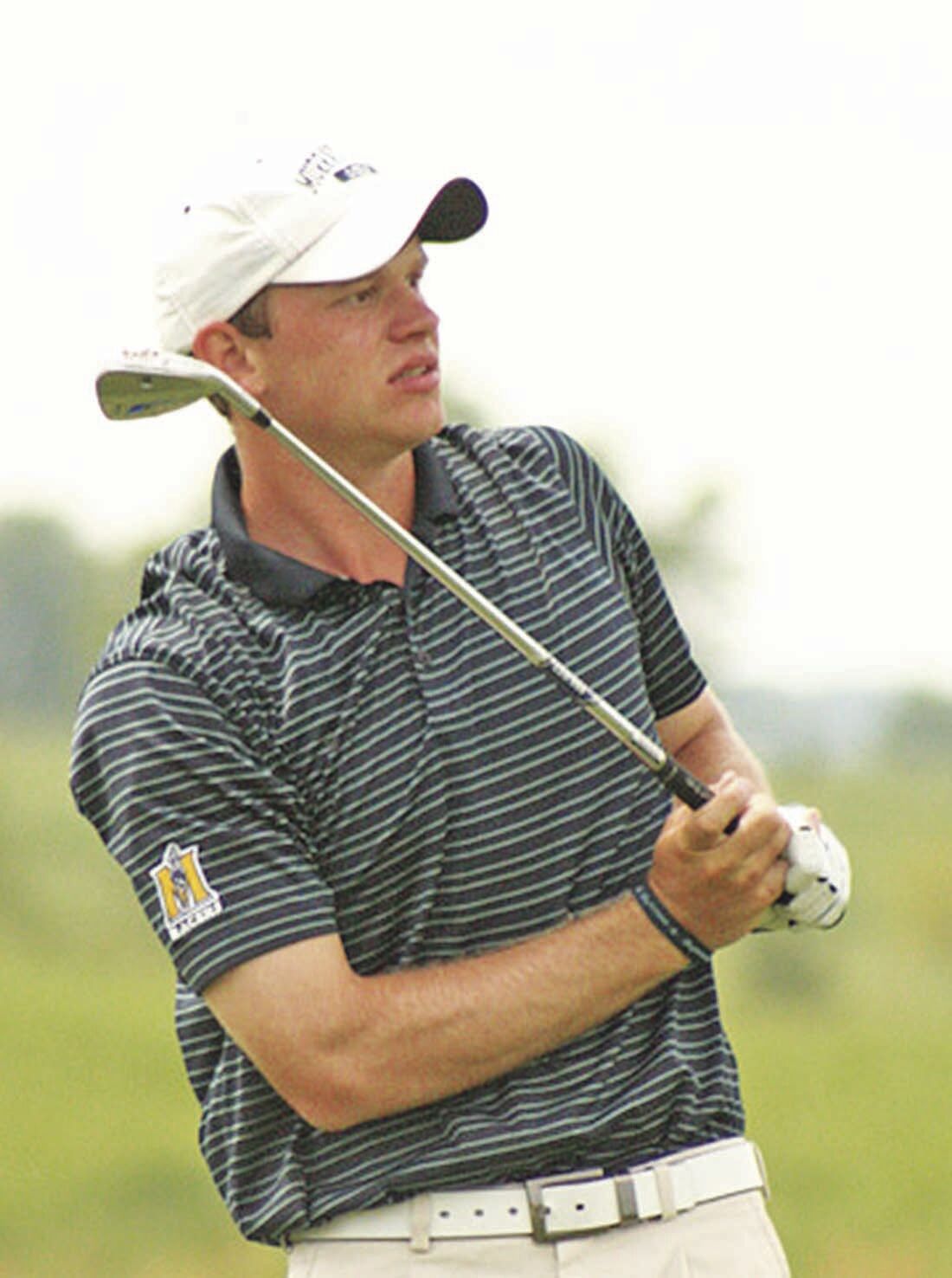 Murray State alum Jared Wolfe is eyeing the future, as in becoming a PGA professional next year.

Murray State golfing alumnus Jared Wolfe follows through on a shot out of the sand during a tournament when he was performing with the Racer men's program.

Murray State alum Jared Wolfe is eyeing the future, as in becoming a PGA professional next year.

MURRAY —A Racer alumnus is closing in on his dreams of getting his PGA Tour card and, barring a catastrophe, will be playing at the highest levels of professional golf next fall. Graduating in 2010, Jared Wolfe helped the Racers win their first Ohio Valley Conference Golf Championship title in nearly twenty years. He came up one stroke short in that championship, finishing just behind fellow Racer and recently inducted MSU Hall of Famer Nick Newcomb.

Reminiscing about his time as a Racer, he was quick to mention his fondness of Murray and that OVC title, “As far as favorite golf memories, when as a team we won our conference championship and went to regionals, that was a lot of fun. I’ve got to say Miller Memorial was my favorite golf course in Calloway County and I remember discovering Matt B’s. Every time I go through the area I make a trip down there to get a couple of slices of pizza, brings back a lot of memories.” He also recalled the time when they won a tournament at the University of Kentucky, coached by interim coach Murray State Associate Athletic Director Dave Winder, as the biggest win they’d ever had at that point.

Unlike his battle for the OVC title, Wolfe didn’t come up short in his aspirations for becoming a professional golfer, however. He paid his dues in the sport’s minor leagues, starting in 2013, working his way up through the ranks and bouncing between the PGA’s Korn Ferry, Latinoamérica and Mackenzie Tours.

“I knew since I was a kid that I wanted to be (a professional golfer),” said Wolfe. “At the PGA Championship at Valhalla and watching them take divots, I told my dad ‘I want to go do that. I want to take divots on a nice golf course and be on TV.” When asked about his childhood favorites, Wolfe replied, “I was a big fan of Payne Stewart, and of course Tiger Woods. I grew up in his era watching him rise in his era from 1997 up.”

His first win as a professional came in 2013, when he won twice on the Hooter NGA Carolina Series and finished tied for 15th in the Korn Ferry Qualifying Tournament, giving him the luxury of full status on that tour. In 2014, Wolfe made two more cuts but failed to win a tournament.

In 2015, Wolfe found himself starting 11 times on the Mackenzie Tour, earning two top-25 finishes and a one-shot victory at the Indian River Open on the Florida Professional Tour at the New Smyrna Beach Golf Club.

Back to the Korn Ferry in 2016, in which his best finish was tied for 54th and it was off to Latin America as a member of the Latinoamérica Tour for the 2017-18 seasons. He won two tournaments, one at the BMW Jamaica Classic in 2017, and another at the Volvo Abierto de Chile in 2018.

“It was not my intended place to go,” said Wolfe. “I instantly fell in love with it, kind of like my dream vacation. We were able to go to some of the coolest places in the world; Santiago, Chile, Bogata, Colombia, spend time at the equator in Ecuador, have some of the best food in the world in Lima, Peru, eat amazing steaks in Buenos Aires, Argentina, and make some of the memories of the people I met, the views, the golf courses, so many cool stories and really helped me learn how to travel and fend for myself and get myself ready for the bigger tours where you travel.”

Dividing his time between the Latinoamérica and Mackenzie Tours in 2019, winning in Panama with a few other top-10 finishes and then back to the Korn Ferry for 2020.

The 2020 season was back in the states and has been good to Wolfe so far, netting him two victories, one in the Bahamas as his first victory in the Korn Ferry Tour, with four rounds under 70. His other most recent win came in Wichita, Kansas at the Wichita Open Supporting Wichita’s Youth, where Wolfe ended the week at 16-under to win at Crestview Country Club and solidify his ranking at the time as fourth in the Top 25. After making the final round at the Orange County National Championship this past weekend, he dropped one spot to fifth in the top 25 in the tour rankings, but still high enough to look forward to playing at the top level next fall, as the top 25 ranked players on the Korn Ferry Tour are guaranteed their PGA cards for the following season at the top. One of his favorite golf memories came in the Bahamas tournament, when he played a round with a friend that was good friends with world-famous actor Sean Connery’s son, and the elder Connery tagged along for 12 holes and watched his son, along with Wolfe, and capped the weekend off with the first-place finish.

Over the course of his professional career, Wolfe has noticed some changes to the way the sport is played. More people are hitting the ball further than before, which makes a golfer have to elevate their play to survive and make their way up the leaderboard. Instead of being in the top two percent of driving distance, he finds himself in the top 10 percent. The average rookie age has dropped on the PGA Tour, as well, so people are getting better younger which makes climbing the ladder more challenging, harder to win. He’ll watch the fellow golfers that are really good at putting and good with swing-tempo to hone his game.

When Wolfe has beaten those challenges and gone into the final weekend with a chance to win, he wouldn’t vary his approach or bear down on an aspect of his game, he chooses to stay loose and not think too much about it. Walking around a mall, doing laundry and hanging out in his hotel room are his go-to routines to keep his adrenaline and anxiety down, which also includes over a hundred viewings of the infamous golf flick “Happy Gilmore.” His young family has been supportive of his climb up the ranks, which helps. He met his wife Kelsey while she was attending rival Austin Peay and they have a daughter, Khloe Marie, that will be cheering him on.

Standing at 6 foot 4 inches tall, Wolfe is on the taller side for professional golfers, which aids in his ability to hit for distance, but also helps him get the ball higher than the average golfer. More height comes with a caveat, however as that affects his game negatively on windy days, as it takes him longer to swing his club. He’s adjusting his game and learning how to cope with the field as he ascends the rankings.

The rest of the current season will test and prime Wolfe as he tunes his game for next season at the top of the sport, teeing off with the Woods, Johnsons, and Spieths of the world. Hopefully he’ll be able to translate his past successes locally into national or worldwide victories on the PGA Tour.