Murray State's KJ Williams seems to let out a yell as he slams home two of his 11 second-half points Wednesday as James Madison players can only watch during the Racers' 74-62 win in the fifth-place game of the Naples Invitational at Naples, Florida. 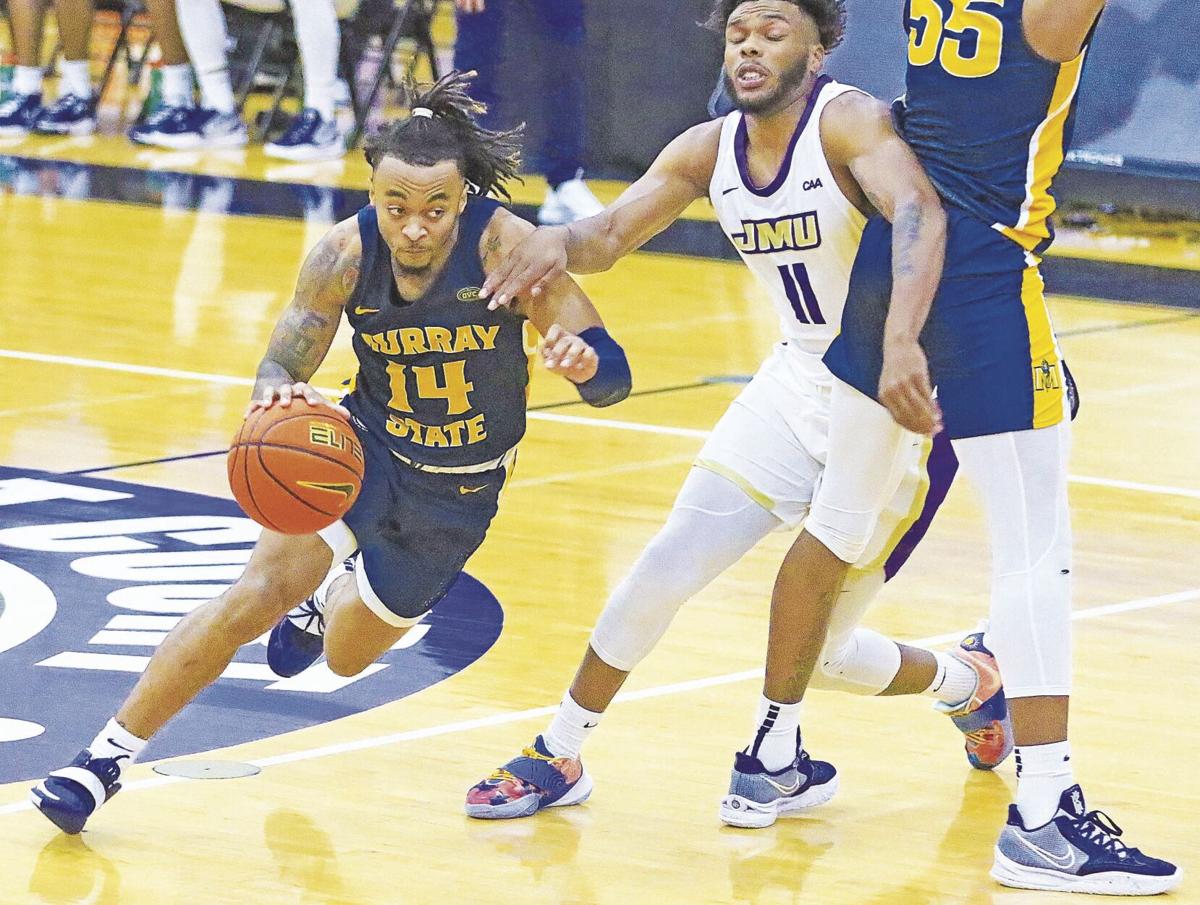 Murray State guard Justice Hill dribbles the ball as he uses a screen in an attempt to elude James Madison defender Charles Falden (11) Wednesday afternoon during the fifth-place game of the Naples Invitational in Naples, Florida. Hill provided a big spark for the Racers with two 3-pointers and an assist to open the second half and help send them to a 74-62 come-from-behind win.

Murray State's KJ Williams seems to let out a yell as he slams home two of his 11 second-half points Wednesday as James Madison players can only watch during the Racers' 74-62 win in the fifth-place game of the Naples Invitational at Naples, Florida.

Murray State guard Justice Hill dribbles the ball as he uses a screen in an attempt to elude James Madison defender Charles Falden (11) Wednesday afternoon during the fifth-place game of the Naples Invitational in Naples, Florida. Hill provided a big spark for the Racers with two 3-pointers and an assist to open the second half and help send them to a 74-62 come-from-behind win.

NAPLES, Fla. —  Ordinarily, fans of a college basketball team would not be too excited about a fifth-place finish in an eight-team tournament.

However, for fans of the Murray State men’s team, Wednesday’s finale to the Naples Invitational had to seem awfully sweet. It marked the second straight day that the Racers displayed the kind of play that should make it a threat for the Ohio Valley Conference title.

They needed a while getting started against a good James Madison team from the strong Colonial Athletic Conference, but once the Racers found their stride, there was no stepping them in an impressive 74-62 win at the Community School of Naples in Naples, Florida.

“It was an awesome win and that was a really good basketball team we played,” said Murray State Head Coach Matt McMahon, whose team moved to 5-1 on the season. The Racers opened with a disappointing loss Monday to East Tennessee State, but righted themselves with an almost 40-point win over a dangerous Long Beach State team on Tuesday.

“It was a great finish to this tournament. Sure, everyone wants to go 3-0 but you’re going to play good teams and hopefully get better, so we’re going home on a two-game winning streak.”

The Racers seemed headed toward a repeat of their opener in the event Wednesday as they could not hit consistently from the field. Meanwhile, the Dukes (5-2), while not burning things up in their own right, were having much more success in building as much as a 12-point lead.

However, that deficit very likely would have been larger if not for some very gutsy play from several Racers at the defensive end. That allowed Murray State to stay within striking range, leading to the most important moment of the game. Down 10 with about a minute left in the first half, forward D,J. Burns scored to trim the lead to eight. Then, after the Dukes missed a free throw at the other end, guard Trae Hannibal, who had a huge tournament, flew downcourt and got a big three-point play off a medium-range jumper to send the Racers into halftime, down only 30-25.

“I thought that, despite our offensive struggles (which included the Racers’ main weapons, forward KJ Williams and guard Tevin Brown, combining for only three points), we kept competing at the defensive end of the floor,” McMahon said. “Then, we get the 5-0 run to end the first half and go into break down five instead of 10.

“I thought (JMU) did a good job of trying to get the ball corralled and to stick to one side of the floor, and they took us out of a lot of our favorite actions, but they actually didn’t guard multiple players for us and really packed in the paint area and took KJ and Tevin away from us.”

Enter point guard Justice Hill, one of those players who the Dukes refused to guard in the first half, but who was not feeling confident with his shot. McMahon told him to start looking for his shot in the second half and, like any good student, Hill listened.

He opened the second half with a corner 3-pointer to trim the lead the two. Second later, a JMU turnover, he buried another one to give the Racers their first lead of the day at 31-30 with 19:20 left. He then ended the opening salvo by finding Williams with a pretty pass that the forward dunked through the basket for his first two points and a 33-30 lead.

And it just going from there as the Racers would outscore the Dukes 49-32 in the second half, shooting a ridiculous 72% in the process, after limping to a 29% finish in the first 20 minutes. The Racers would lead by as many as 17 points on their way to the win.

“Coach came in and gave me some encouraging words to try to motivate me a little bit,” said Hill, who ended Wednesday with 11 points, six assists and two steals. “I came out and did my job.

“I had struggled all tournament, so he told me to get going.”

Hill’s early scores seemed to open the court for Brown and Williams, who would finish with 15 and 11 points each. There were other heroes, though, including Burns, who ended with 10 points and nine rebounds, six of which were offensive. He had a calling card moment when he scored on a tip-in in the first half that came on the Racers’ sixth shot of that possession.

There was also Skipper Brown, who had his best game so far as a Racer with six points, two rebounds and two assists. However, if Hill was the catalyst of the big second half, it was Hannibal who kept the Racers’ wire hot by doing what he had done all tournament, including dive for loose balls, knock the ball away and cause utter chaos for the opposition.

Hannibal scored 17 points, pacing a Racer bench that had 27 Wednesday and added eight rebounds, an assist and a steal.

“Trae was fantastic. He did a little bit of everything,” McMahon said of Hannibal, who also received praise from Hill.