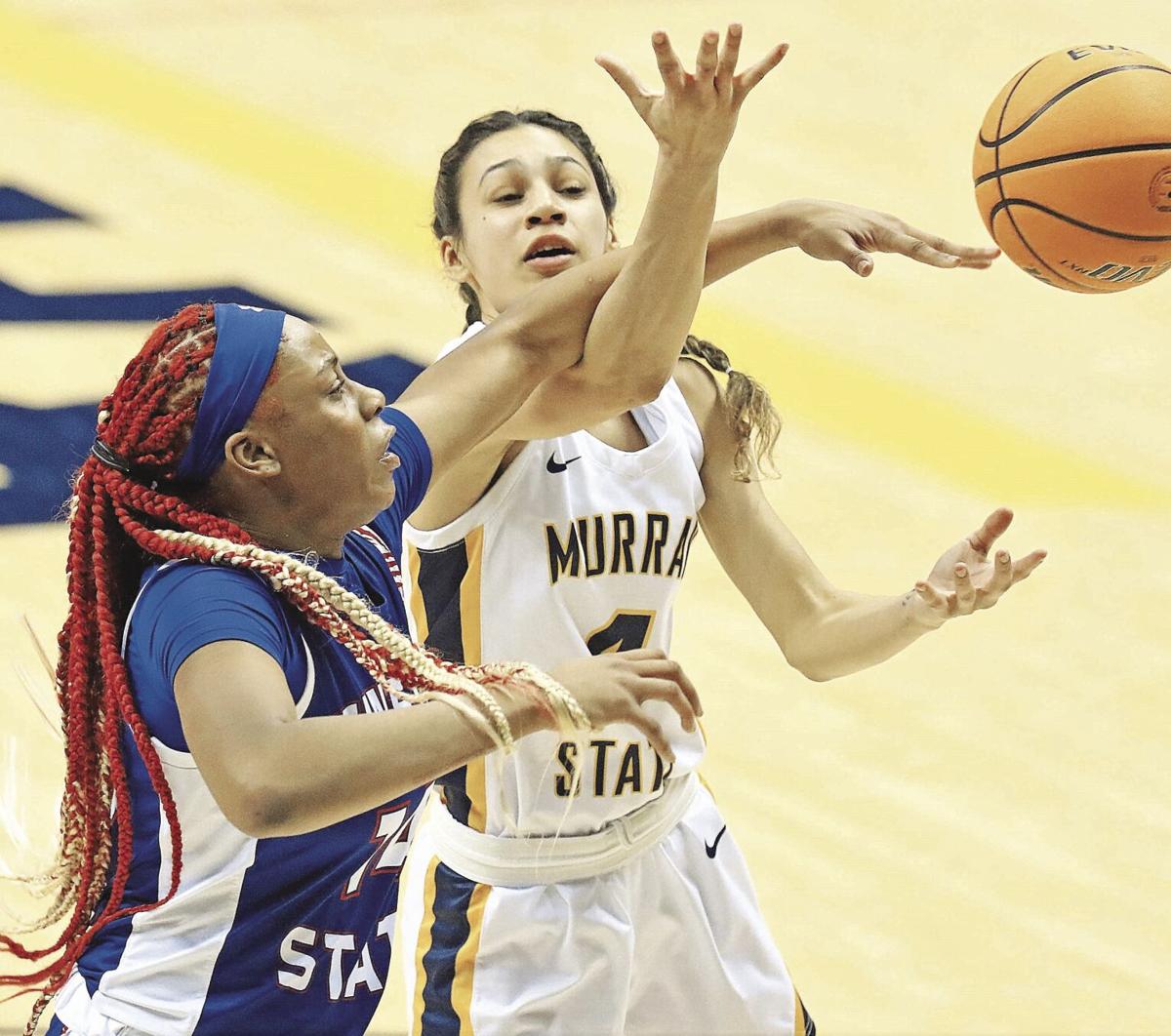 Murray State guard Lex Mayes is fouled by Tennessee State's Sierra McCullough on a shot attempt Thursday at the CFSB Center in Murray. 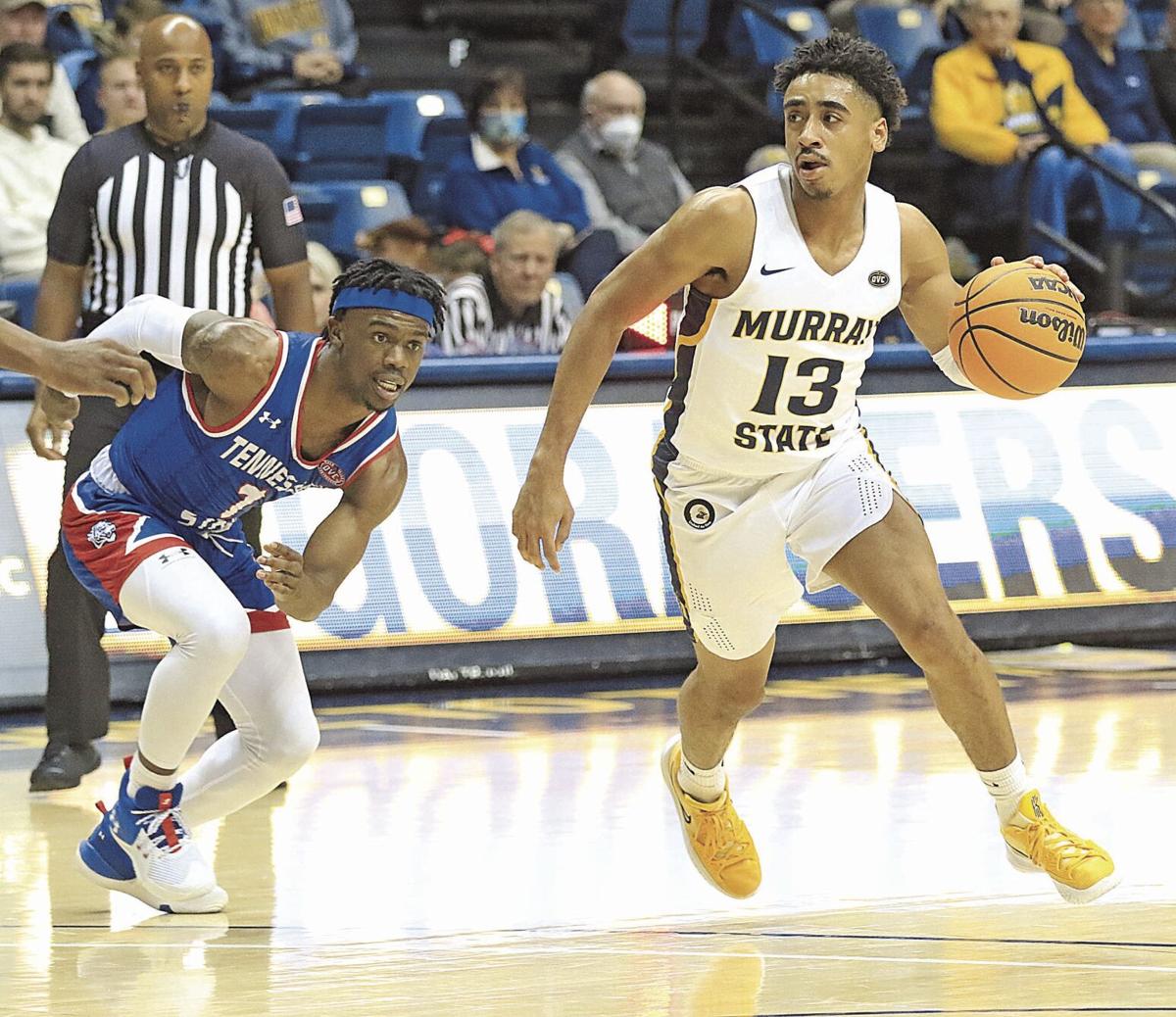 Murray State guard Carter Collins (13) had a hand in every point of an 11-0 run that started Thursday night's game with Tennessee State in Murray. Here, Collins handles the ball against TSU defender Marcus Fitzgerald Jr.

Murray State guard Lex Mayes is fouled by Tennessee State's Sierra McCullough on a shot attempt Thursday at the CFSB Center in Murray.

Murray State guard Carter Collins (13) had a hand in every point of an 11-0 run that started Thursday night's game with Tennessee State in Murray. Here, Collins handles the ball against TSU defender Marcus Fitzgerald Jr.

MURRAY — Unlike the last time they played at the CFSB Center, the Murray State women's basketball Racers handled a late lead much better Thursday.

After finally gaining the lead for the first time late in the third quarter against Tennessee State, the Racers finished strong, pulling away to a 76-62 win that moved them to 11-4 overall and 3-1 in OVC play.

“That’s what was so disappointing last time. We never did make that big shot or make the big play to extend the lead that night. This time, we went from (the identical 57-50 lead as they had in the final minutes against Tennessee Tech about two weeks earlier) to being up 10, then 12,” said Murray State Head Coach Rechelle Turner.

“That’s what great teams do.”

TSU (9-7, 4-1 in OVC play) was in control in the early going and used very accurate shooting from the field to build a lead. The Tigers, at one point, led 13-4 but the Racers steadily cut into that deficit and went to halftime down only 35-32 after the Tigers shot 50% from the field and made very tough shots in the process.

However, the Tigers’ shooting touch began to disappear toward the end of the third quarter as they dropped to 47%  accuracy from the field. Meanwhile, the Racers were getting warmer as they began to get easy baskets in the paint.

Missing from the equation in the first half had been their primary weapon — forward Katelyn Young, who had only six points and spent most of the first two quarters on the bench with two fouls.

Young was back to her old self in the third quarter, scoring seven of her team-high 22 points in that frame as the Racers’ ability to avoid turnovers against TSU’s suffocating full-court press defense led to not only some easy baskets but began resulting in visits to the foul line.

The Racers were 5-of-6 in the third quarter at the charity stripe and when Young went 1-of-2 with 1:50 left, they had their first lead of the game at 49-48. Guard Bria Sanders-Woods then hit two charity tosses of her own as the Racers took a 51-50 lead to the final 10 minutes.

That is where the Racers took charge, holding the high-powered Tigers scoreless for the first four minutes as they dragged the visitors into a half-court game that was not to their liking. TSU suddenly was not hitting the shots that had been falling in the first half as their offense became stagnant, with several errant passes being the result.

Meanwhile, it was the Racers who began to stretch the lead. Two free throws each from guard Alexis Burpo and Young were followed by a runout score from forward Hannah McKay, then a McKay  3-pointer that pushed the lead to 60-50. McKay then scored off a whirling drive to the basket before Young added another easy deuce that left the Racers in command of a 64-50  lead that would grow to as much as 19 points before the end of the game.

“We just knew we had to fight back. We were knocked down (in the first half) but we had to keep fighting back,” said Young, who added seven rebounds.

“The main thing was not to turn the ball over because they’re a little more quick than most teams,” said McKay, who had 19 points, many on layups after the Racers broke the press, along with six boards. The Racers had 13 turnovers Thursday but only a few led to the easy baskets that fuel big runs for TSU.

Guard Macey Turley was the other Racer in double figures with 12 points, 11 in the second half. Guards Alexis Burpo (nine points) and Sanders-Woods (eight) were big in other areas as Burpo had seven rebounds and six assists, while Sanders-Woods ended with five assists.

Sometimes, games in which points are a premium are works of art on the defensive side. Thursday night, the host Racers (13-2, 3-0 OVC)  crafted a defensive masterpiece putting the clamps on a team that had been averaging 89 points in its last five games.

“I don’t call that sloppy. It’s a great win for our players. I thought we had a great week of practice and, obviously, defense was a big emphasis for us,” McMahon said. “They were a top-20 team in the country in 3-point shooting. Also, in three of our four halves this year so far in league play, we had given up 40 or more points, so we spent a lot of time on defense in practice and I thought our guys did an awesome job carrying that over to the game.

To limit them to 44 points on 3-of-16 from three and allowing two assists to 16 turnovers, I thought was a fantastic effort.”

Murray State shot from the starting gate int this one, scoring the first 11 points of the game en route to leading by as many as 23 points before settling for a 35-16 lead at halftime.

That start could be attributed to the efforts of guard Carter Collins, who accounted for all 11 of those points. He opened the game with a driving scoop layup, assisted forward KJ Williams hook shot bucket, then added two 3-point bombs with one of those coming as a result of his steal at the defensive end.

“I guess the ball just kind of found me early,” said Collins, who ended his night with eight points, two rebounds, two assists and a steal. “I was able to make plays at the beginning of the game and gave us a lift to start off.”

Steadily, though, as the first half continued, Murray State began to lose its shooting touch and that carried over to the second half. Eventually, the Tigers began to find their shooting stroke and the Racers’ once-huge lead suddenly started getting smaller.

It would drop to only 10 points at 35-25 when forward Kassim Nicholson scored on a layup with 15:47 remaining. However, the first 3-pointer of the season from guard Trae Hannibal, then a dunk by guard Justice Hill off a nifty pass from forward Jordan “Skipper” Brown restored order at 40-25.

After the Tigers cut the lead to 40-28, the Racers went on the decisive run as Skipper-Brown scored a basket off a Tevin Brown pass, followed by three free-throws by Brown as he was fouled on a three try, then a dunk from Skipper-Brown as Hill returned the favor from earlier. That left the Racers up 47-28 with 13:41 to go.

Skipper-Brown had eight points, two rebounds and an assist as he continues to improve as a valuable bench player.

“I’m getting real comfortable with it,” Skipper-Brown said, smiling as he talked about his favorite way of scoring, the dunk.

He has wowed Racer fans with some dazzling slams this season, including a breakaway windmill job against Southeast Missouri in the OVC opener about two weeks ago. He had three more Thursday, two off loose-ball scrambles.

“Just get up and tear the rim off,” he said.

Look for previews of Saturday’s  big OVC doubleheader between Murray State and Belmont on the Ledger & Times website later today.