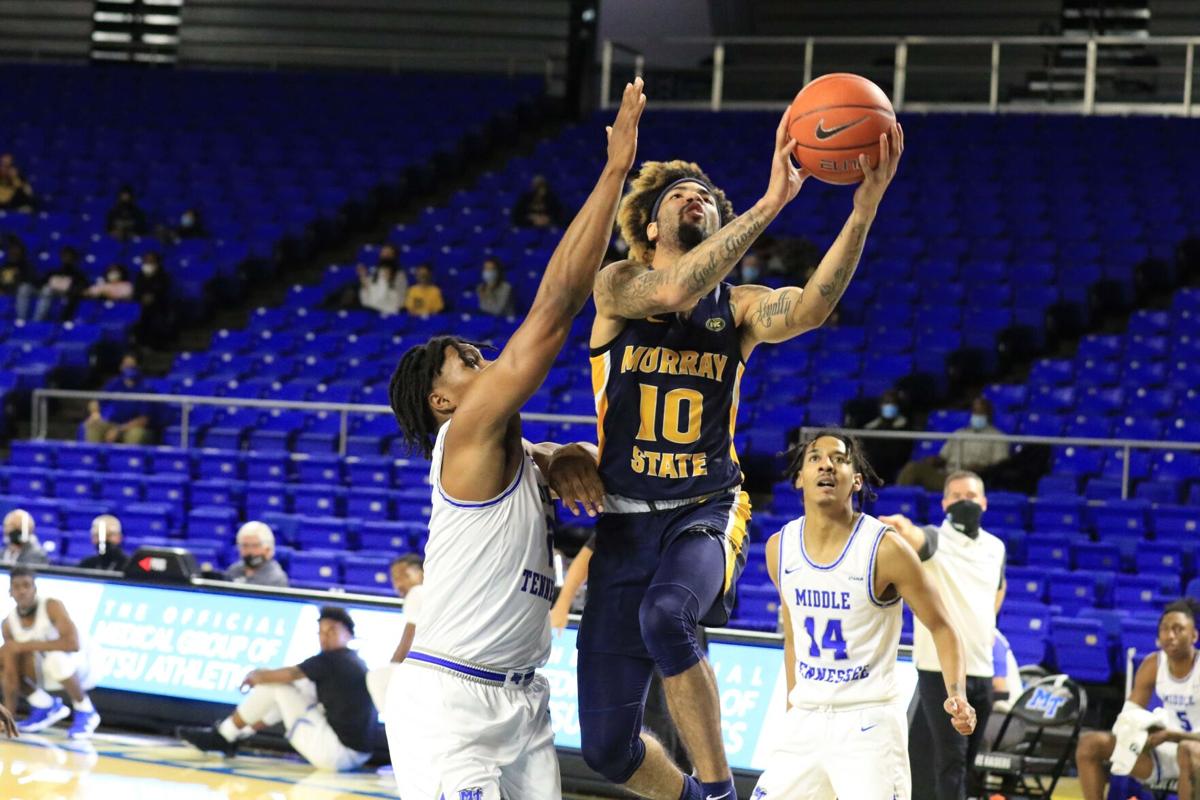 Murray State’s Tevin Brown (10), center, attempts a shot Wednesday night while flanked by Middle Tennessee State University’s Deandre Dishman (2), left, and Jalen Jordan (14). Although they only trailed by 4 at the half, the Racers couldn’t make up for an aggressive defense and a slew of turnovers and fell to MTSU 78-61. 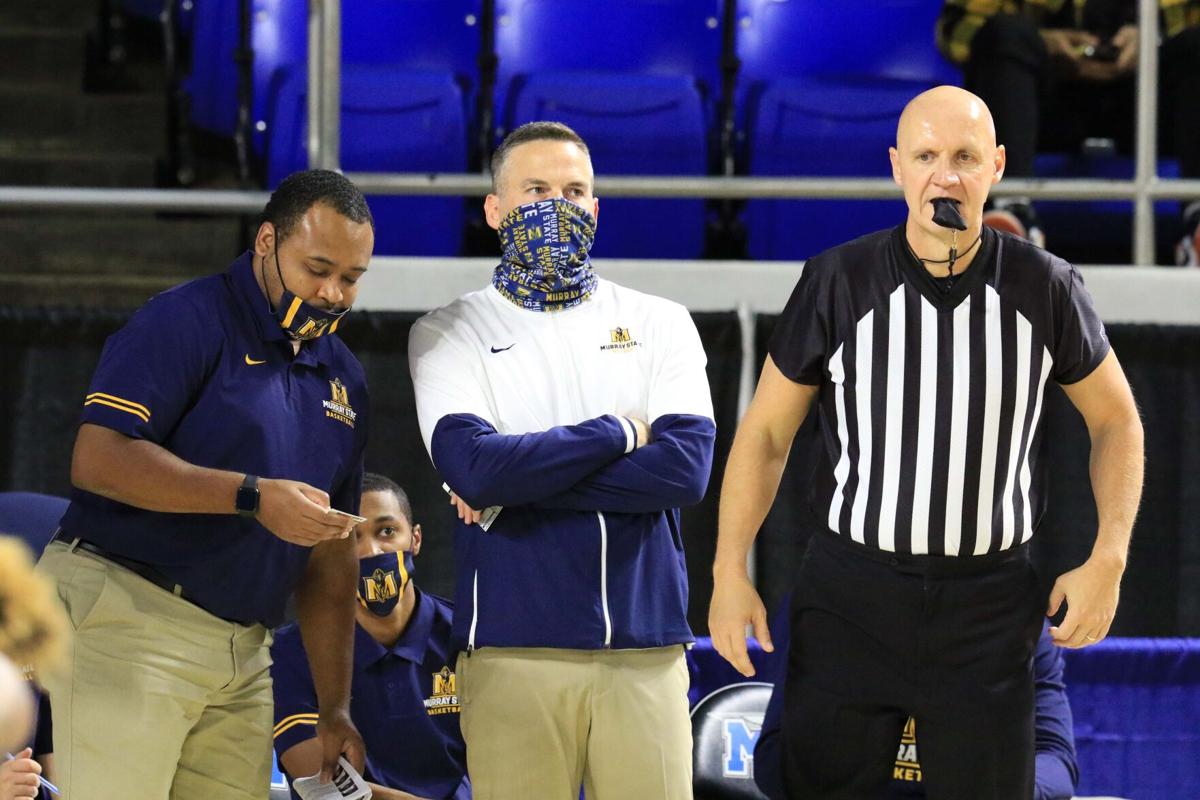 Murray State’s Tevin Brown (10), center, attempts a shot Wednesday night while flanked by Middle Tennessee State University’s Deandre Dishman (2), left, and Jalen Jordan (14). Although they only trailed by 4 at the half, the Racers couldn’t make up for an aggressive defense and a slew of turnovers and fell to MTSU 78-61.

MURFREESBORO, Tenn. — The first road test of the 2020-21 college basketball season proved to be too much of a match for the Murray State Racers on Wednesday night, as they couldn’t hold on to a first half lead and succumbed to the Middle Tennessee Blue Raiders in Murfreesboro, TN, 78-61.

After setting the offensive record books on fire Sunday night, the Racers (1-1) struggled to put the Blue Raiders away, as they led by as much as seven points in the first half, but couldn’t build on that lead going into halftime, as they fell behind by four at the break.

The Blue Raiders lead grew to as much as 24 points with five minutes to go in the game, which was due in part to the very physical, aggressive half-court defense the home team played and the scoring of redshirt senior forward Jo’Vontae Millner, who averaged 1 PPG coming in to the night, but finished with 19 to lead Middle Tennessee. The veteran Racer team seemed to be outhustled and out-toughed through most of the game.

“We knew this would be our first opportunity to evaluate where we’re at,” said Racer head coach Matt McMahon. “Obviously, we have a lot of work to do at both ends of the floor, establishing a rotation and what personnel need to be on the floor.”

Things were going well for the Racers as they came out of the opening tip with good energy and built a 26-19 lead. They then hit an eight-minute scoring drought at the 9:15 mark of the first half, and Middle Tennessee used that as an opportunity to score 12 unanswered points bookended by two field goals from junior guard Dontrell Shuler and the home team never would trail again in the game.

“We’ve got to get a lot tougher,” said McMahon. “Middle Tennessee was just tougher than us at every position tonight. We’ve got to get tougher on both ends of the floor. We have to be able to execute better offensively and not go through entire stretches where you’re going entire media timeouts without scoring. For the first time (this season) we got hit with some adversity. They punched us with that run to start the second half and we did not handle it well at all. We weren’t very good at anything tonight.”

That run including great half-court pressure man-to-man defense that forced junior guard Tevin Brown into 4-14 shooting, with an uncharacteristic 1-7 from behind the arc. He still finished with a tie for the team-high in points and rebounds with 13 and 7 rebounds, respectively, led the team in assists with three, but seemed to struggle to really get going as the game went on.

The Racers’ troubles, besides being handled physically, were evident from deep, as the team finished 3-16 from three and also by turning the ball over 18 times, leading to the Blue Raiders capitalizing with 17 points, which ended up the final margin.

Murray State must now turn their focus to conference play, which is unusual for early December. The Austin Peay Governors (2-1) come to the CFSB center next week, which gives Coach McMahon very little time to fix the issues from the game. Usually a coach gets almost two months-worth of gameplay, film and roster management to fine-tune their teams for the conference grind. Rival Peay will also be bringing to town the OVC favorite for Player of the Year, Bowling Green product and senior Terry Taylor, who is averaging 22.6 PPG and 13.3 RPG.

“It’s all on my shoulders,” said McMahon. “It’s up to myself and the coaching staff to design competitive practices and figure out rotations this upcoming week so we can get better.”

Tipoff against Austin Peay is scheduled for 7:30 p.m. Tuesday, Dec. 8, at the CFSB Center.