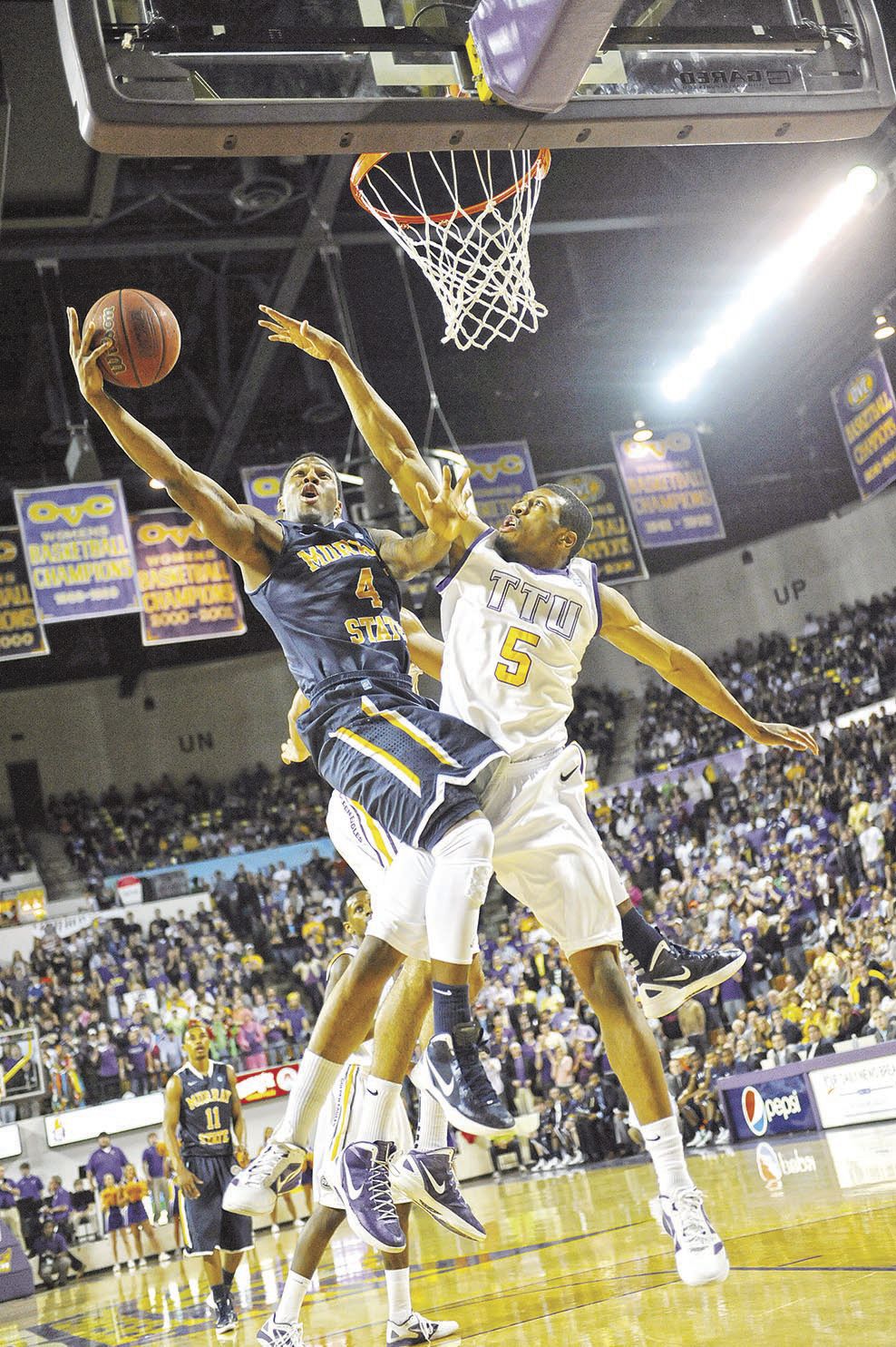 Latreze Mushatt shoots the ball against Tennessee Tech’s Javon McKay in the regular season finale on Saturday, February 25, 2012 in Cookeville, Tenn. The Racers’ winning streak and national ranking that season also brought a surge of attendance to away games. Reported attendance at this game was 9,021, compared to an average 1,745 from their other seven home conference games that season. 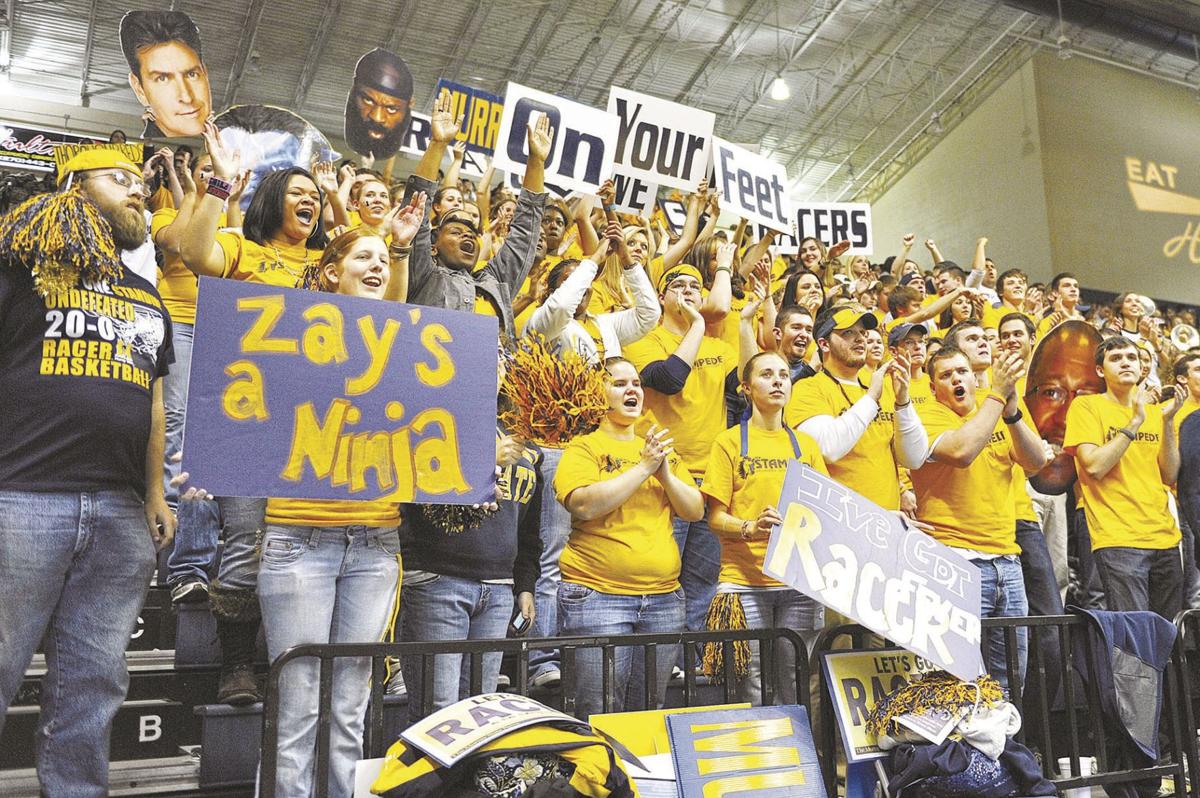 Murray State students filled the student section during most of the 2011-2012 men’s basketball season, like this home game (televised on ESPN3) against Eastern Illinois on Saturday, January 28, 2012.

Latreze Mushatt shoots the ball against Tennessee Tech’s Javon McKay in the regular season finale on Saturday, February 25, 2012 in Cookeville, Tenn. The Racers’ winning streak and national ranking that season also brought a surge of attendance to away games. Reported attendance at this game was 9,021, compared to an average 1,745 from their other seven home conference games that season.

Murray State students filled the student section during most of the 2011-2012 men’s basketball season, like this home game (televised on ESPN3) against Eastern Illinois on Saturday, January 28, 2012.

MURRAY — In the 2011-12 basketball season, one mid-major team held the title as the lone undefeated team in the country. That team was the Murray State Racers, who rattled off 23 straight wins to start the season and finished with an astonishing 31-2 record.

It was a team comprised of three seniors, Donte Poole, Jewaun Long and Ivan Aska, seven juniors, including Ed Daniel and Isaiah Canaan, and a trio of freshman that included Zay Jackson.

The season started like many seasons had in the past for the Racers with the schedule designed to let the team ease into the groove. Harris-Stowe, Morgan State and Tennessee Temple were the opening three games and the Racers won with relative ease in each. Their first test was in the fourth game, on the road, against the University of Alabama-Birmingham, and the Racers won 62-55 to remain undefeated before their big trip to Alaska for a tournament that signaled the start of something special for this group.

Covering this team during that season for the Murray Ledger & Times was Ricky Martin, former sports editor, and freelance photographer Kyser Lough. Also along for the entire ride with a courtside seat was Neal Bradley, voice of the Racers.

The Racers headed to Anchorage Alaska with three games on the horizon. They took the first, just squeaking by the home team Alaska-Anchorage 64-62. Game two against San Francisco was also a one score game, and the Racers pulled it out 70-67. That set up a championship game between Murray State and the University of Southern Mississippi.

“There’s a great story from that tournament that I’ll always remember,” Martin said. “Isaiah goes for 36 points and Murray beats Southern Mississippi in double overtime to win the championship. I think people forget how truly deep that team was – it was legitimately a nine-player rotation. With that depth came competition, and obviously when you think about all those talented players, especially with some of the newer faces, there was going to have to be some sort of moment that established order, especially in the frontcourt.

“Someone who was on the bench that night against Southern Mississippi told me weeks later — in the middle of the game, with Isaiah going off, one of the younger guards looked down at him and said, and I’m paraphrasing, ‘OK, Isaiah’s that dude.’ Everyone knew Isaiah was a great player, but I think that was the moment everything clicked into place and the guys who hadn’t quite figured out their role, not only found it, but thrived in it.”

Canaan went 6-11 from the three-point line in that championship game and three other Racers scored in double-digits. It took not one overtime, but two, for the Racers to win, but that win proved that this team was for real. After that, they started to show up on the radar of the nation, but it wouldn’t be until a month or so later that they went from a blip on the radar, to an unmistakable force.

“When Murray State won the Great Alaska Shootout, people started to think, ‘OK, this team could be pretty good,’” Martin said. “It’s sort of funny, because the first hint they gave us that they would become historically great came well after midnight, three time zones away from Murray, in front of very few people.”

The next three games for the team featured Western Kentucky, Dayton and #21 Memphis on the road. Murray State made short work of WKU 70-59, then Dayton 75-58, before making the trip to Memphis for the biggest test of their non-conference schedule.

In the game against the Tigers, the team once again showed the potential they possessed thanks to their depth. Poole led the way with 20 points, Canaan added 15, and Daniels and Aska went for 13 and 12 respectively.

“The moment that I knew that this team was going to be something special was after the win at Memphis, after getting a double-digit lead, squandering a portion of it, and holding off Memphis,” Bradley said. “It was obvious Memphis wanted to shut down Isaiah, but Donte Poole was tremendous and helped the team, I believe, get confidence. It also proved that they could win without a monster game from Canaan, and from that point on I think we knew this was going to be a very special team after the win at Memphis.”

Murray State came out of the game 10-0 and the national spotlight turned in their direction.

“Prior to the Memphis game, only a handful of media outlets that don’t traditionally cover Murray had really taken notice,” Martin said. “Some of the college basketball talking heads were mentioning Murray State, but after Memphis, it just exploded. During the press conference after the Dayton game, I remember sitting in the media room with the usual people. In the tunnel after the Memphis game, all of the sudden, I’m interviewing Jewaun Long with Gary Parrish (a sports columnist for CBSSports.com and the host of “The Gary Parrish Show” on 92.9 FM ESPN in Memphis). When the Racers beat Memphis, everything changed.”

Not only were the Racers still undefeated, but all of a sudden, the world took notice of the mid-major team out of Murray, Kentucky. That was just the beginning. Before long, that streak reached 15 games, then 20, and the Racers steadily climbed in the polls.

“There was excitement after the Memphis win, but once the team was ranked and the national media started coming in the atmosphere got wild,” Lough said. “Murray State fans always came out in droves for a nationally-televised TV game and that season they brought that energy to every game.”

Not long after the win over Memphis, the team opened up conference play, still undefeated. They proceeded to roll through the likes of UT Martin, Eastern Illinois, Austin Peay, Jacksonville State and any other team in the conference that threatened to derail their bid for perfection. By Jan. 21, the Racers were sitting at 20-0 as one of the last two remaining undefeated teams and on the road for a game at SIU-Edwardsville. The other undefeated team was the Syracuse Orange.

That game at SIUE was monumental and still resonates with both Bradley and Martin.

“Oddly my greatest memory of that season, despite all the wonderful things that happen during the regular season, the one that stands out, was playing at SIU-Edwardsville,” Bradley said. “Getting off the bus and having to walk through the crowd to get into the gym and hearing the overrated chant. That basically brought tears to my eyes while the players listened to their music. I’m not sure they ever heard it. That night the Racers emerged as the only unbeaten team in the nation in Division I basketball after Syracuse lost earlier in the day.”

“The game I most remember was at SIU-Edwardsville,” Martin said. “Murray was one of two undefeated teams left in the country going into the game, and that afternoon, I think it was Notre Dame, upsets Syracuse, leaving Murray as the lone undefeated team in the country right before tip-off. The fans were lined up outside the arena, heckling, booing – it was wild.”

The undefeated bid came to a close against Tennessee State in a home game at the CFSB Center. Despite Canaan’s fourth 30-point night, the Racers dropped the game and picked up their first blemish on their spotless record. In the game, future NBA player Robert Covington led the Tigers with 17 points and eight rebounds.

“There was always the speculation of if or when the team was going to lose, so it wasn’t that much of a surprise to me,” Lough said. “The biggest surprise was how well the team handled it, like it was a pressure valve releasing. They came out a few days later and obliterated Austin Peay.”

All season long, the crowd that attended Murray State games inflated nearly ten-fold on the road. A prime example is the attendance at the Tennessee Tech game on Feb. 25. The average attendance in the other seven home conference games was 1,745, while the game against the Racers brought in a crowd of 9,021.

“The home games were special,” Martin said. “But, what I remember most are the road games. Murray State coming to town had to be similar, on a smaller scale, to the Beatles showing up in your town for the first time. Every arena was packed.”

As for home games for the Racers, none was more special or more electric than the BracketBuster game against St Mary’s on Feb. 18. This night featured a Dick Vitale sighting, a 14-point win over a ranked team, and the last home game of the year.

“Nothing, I imagine, will ever rival the atmosphere during the St. Mary’s game,” Martin said. “Two nationally ranked teams, on ESPN, with Dickie V on the call. It was an absolute circus. I remember getting on the catwalk at the CFSB Center that afternoon during shootaround, and shortly after everyone cleared the floor, I was sitting up there by myself, and thinking, ‘If you’re a college basketball fan, there’s no where else you’d rather be tonight than in Murray, Kentucky.’ I mean, how cool is that?”

At their peak, the Racers were ranked #7 in the nation and were the talk of the college basketball world. They went on to garner an eight-seed in the NCAA tournament and knocked off Colorado State before falling to Marquette in the second round. Looking back on the time, it’s interesting to see some of the articles written by national media outlets, such as the following:

“The last undefeated team in Division I men’s college basketball has never won an NCAA title,” Jake Simpson of ‘The Atlantic’ wrote in a Jan. 31, 2012 article. “It has no famous NBA alumni, and none of its current players (or its coach) is known on the national stage.”

Of course, Charles Barkley would disagree with the NBA alumni statement after numerous battles with Popeye Jones. Still, just eight years later and the Racers have one of the biggest budding superstars in the NBA in Ja Morant. Plus, they have sent three players to the league in that time, including Canaan from the very team that rolled through so many weeks undefeated. It’s amazing how things have changed in such a short time span.