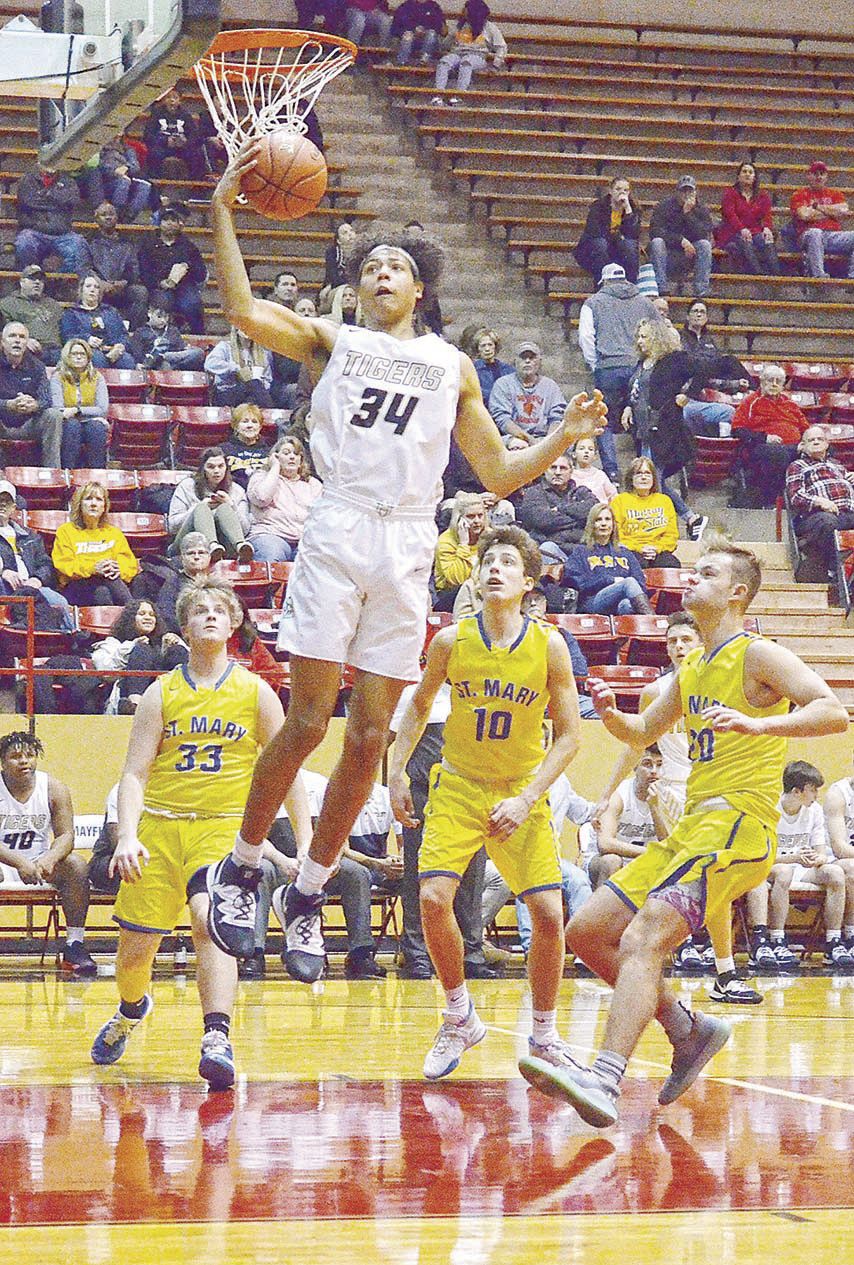 Darius Duffy was a major contributer to the 62-47 win. He scored a double-double with 21 points and 10 rebounds. 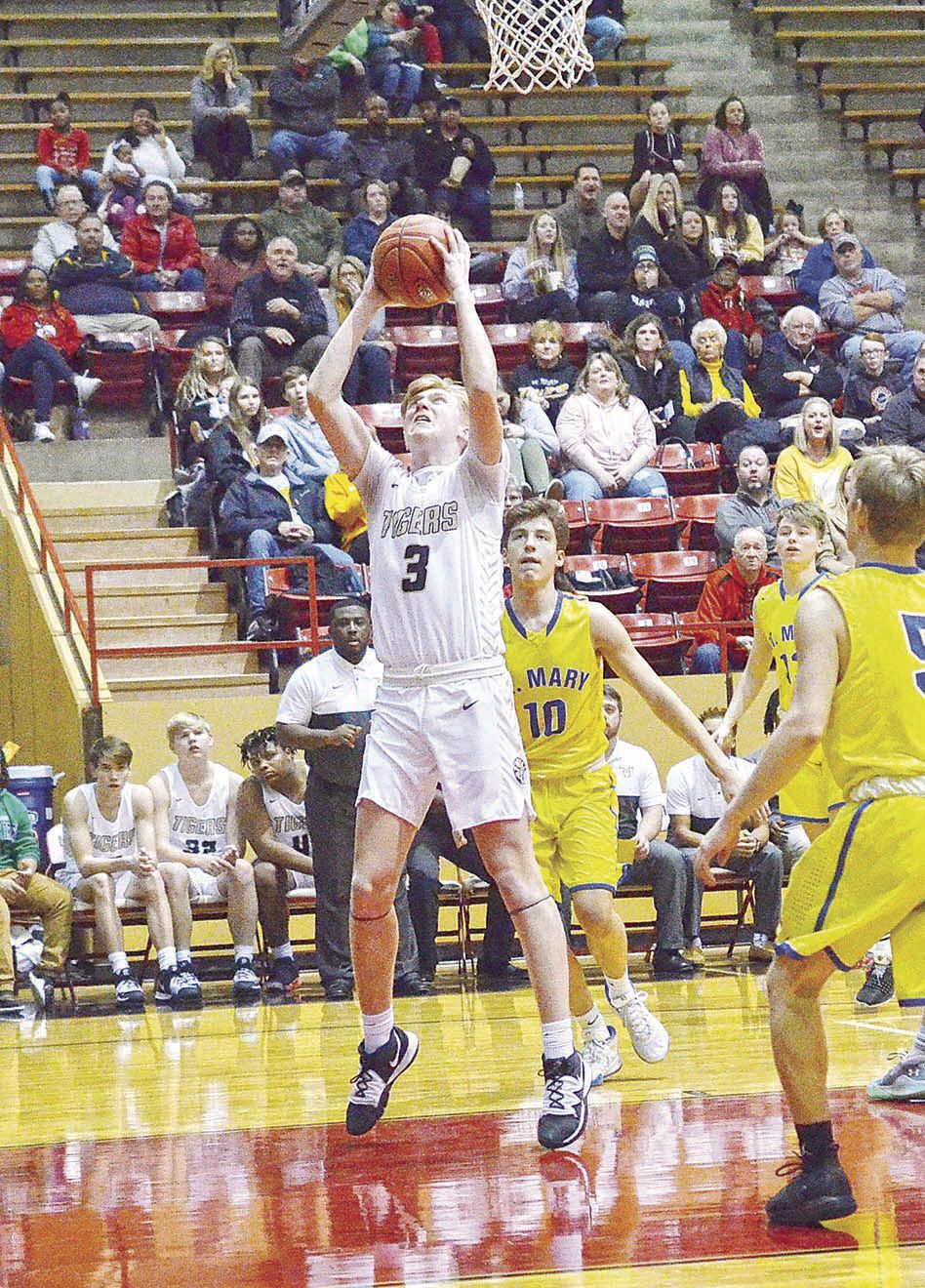 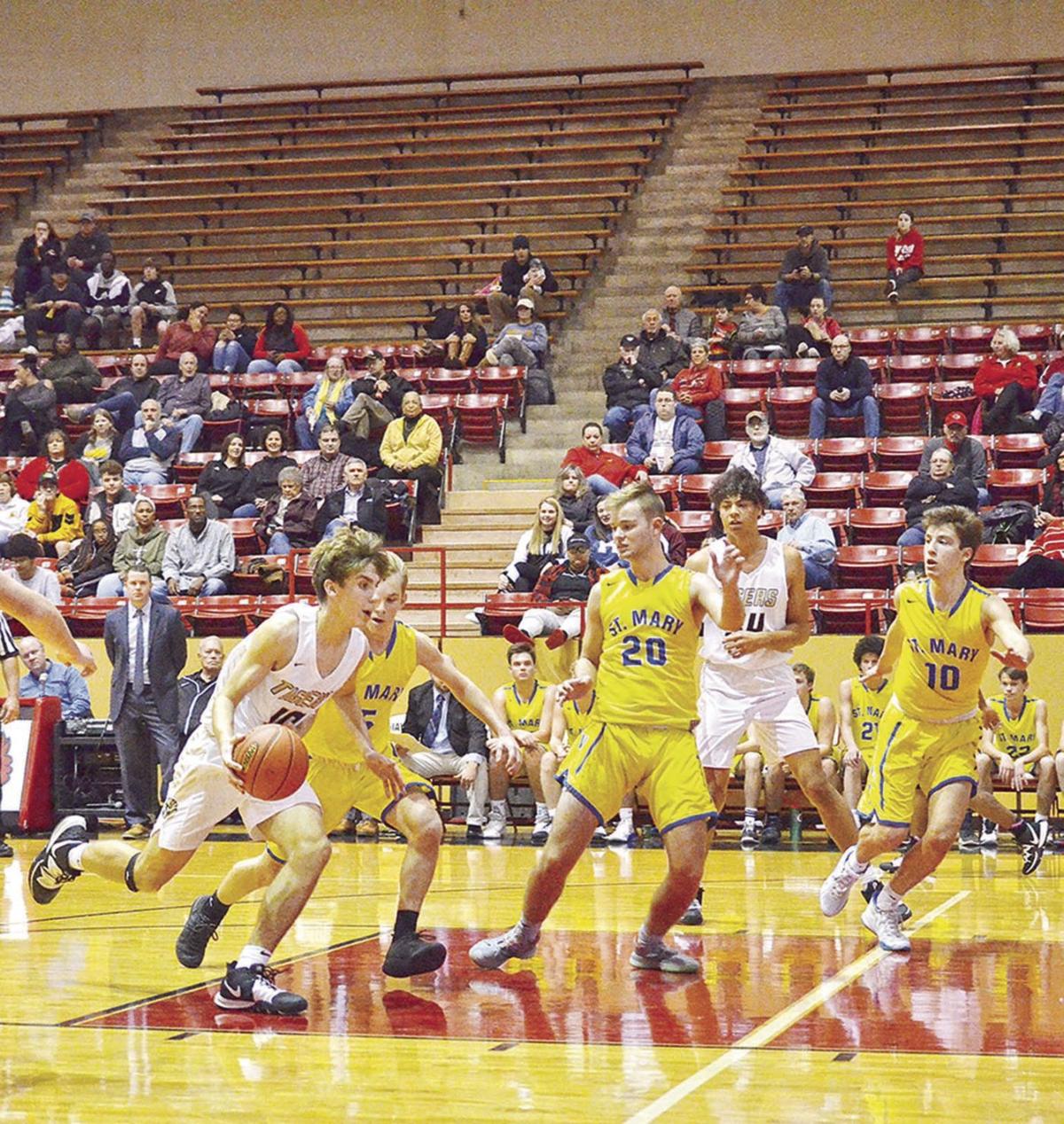 Darius Duffy was a major contributer to the 62-47 win. He scored a double-double with 21 points and 10 rebounds.

It took Murray High the entire first half to get into the groove last night at the All-A Semifinals in Mayfield where the Tigers faced off against the St. Mary Vikings. The first two quarters were back-and-forth. The Tigers ended the half on top 31-28 but didn’t show what they were truly capable of until the third and fourth quarters rolled around. That’s when the team distanced their lead to a dominant 62-47 win.

Murray High head coach Dior Curtis said, “I felt like we came out and played hard, but our pressure didn’t quite work the way we wanted it to work tonight. So in the second half, we decided to just play regular man-to-man defense and guard them and see what happened that way, and we ended up stopping them quite a bit.”

Darius Duffy was hot coming into the game. He scored six points in the first three minutes to tie the game at 6-6, but the Tigers’ defense kept allowing St. Mary to creep back up and flip the score around.

That all changed in the second half when Murray allowed zero turnovers and zero offensive rebounds to the Vikings.

“Our defensive intensity is what led to tonight’s win,” Curtis said. “We just sat down and guarded people and rebounded the ball. We had zero turnovers in the second half and gave up zero offensive rebounds. That was huge.”

But it wasn’t just the defense that picked up for Murray High, it was also the offense.

“We ended up scoring the ball in the third and fourth quarters as well,” Curtis added.

That something was a 13-0 run with the last six points being from Duffy’s 6-0 run in the last two minutes of the third.

Apparently, Duffy’s run was contagious because Grant Whitaker came into the fourth with a 6-2 run of his own that brought the Tigers up 55-37. From that point on, the game was in the bag.

With two minutes to go and the score at 60-39, Curtis cleared off the bench and brought in the second string.

Carter Allen was the only JV player to put points on the board with two free throws that ended the game at 62-47.

“When those guys get in, it’s always fun to see them play, but I told them to stop fouling,” Curtis said. “They foul a whole lot when they get in and stop the clock. We have to work on that for those guys moving forward.”

However, Curtis was pleased overall with the second string’s performance last night and was glad they had the opportunity to put in some minutes.

Next up, Murray High will compete today in the All-A finals against host Mayfield Cardinals at 8 p.m.

Mayfield is currently ranked fourth in the region with an 11-3 record while Murray High is ranked second with a season record of 13-3.

“It’s going to take attention to detail,” Curtis said. “We’re going to have to make some shots and play defense. ‘Defense wins championships’ is the whole cliche, and that’s what we do really well. If we come out and defend, we can be successful tomorrow.”