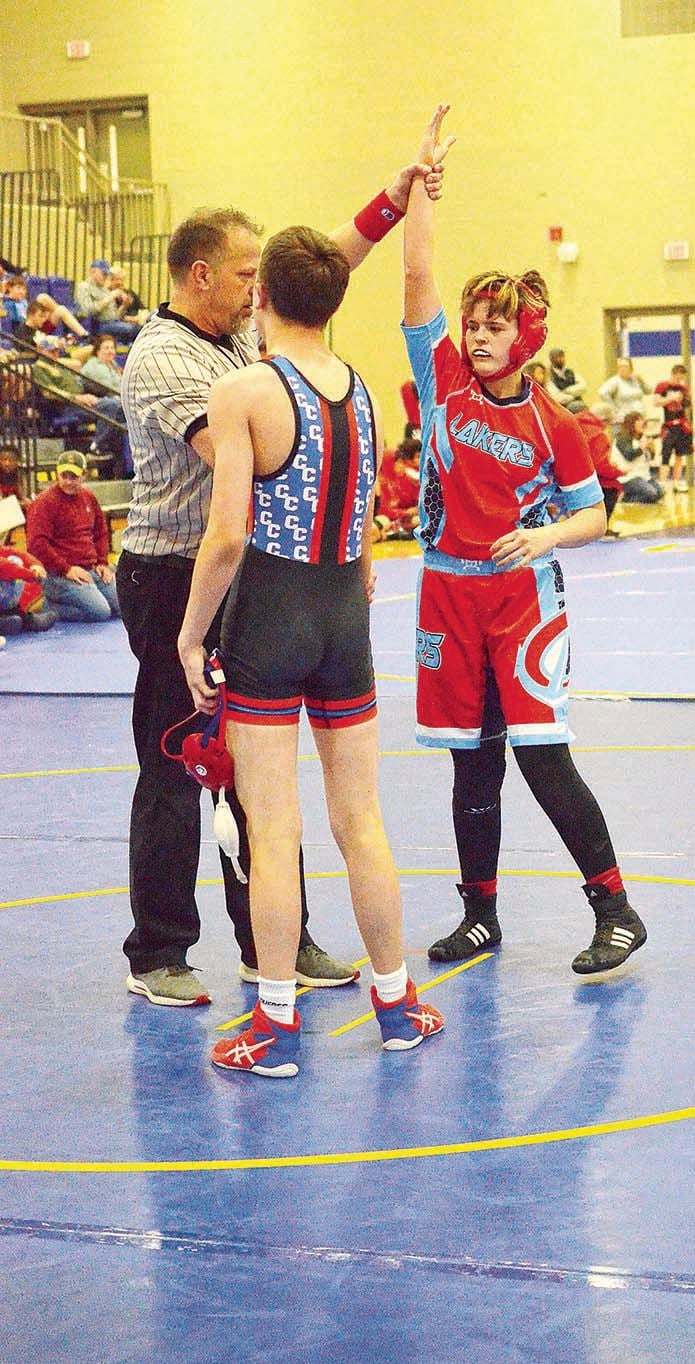 Powers’ arm is raised in victory after she secured the pin. 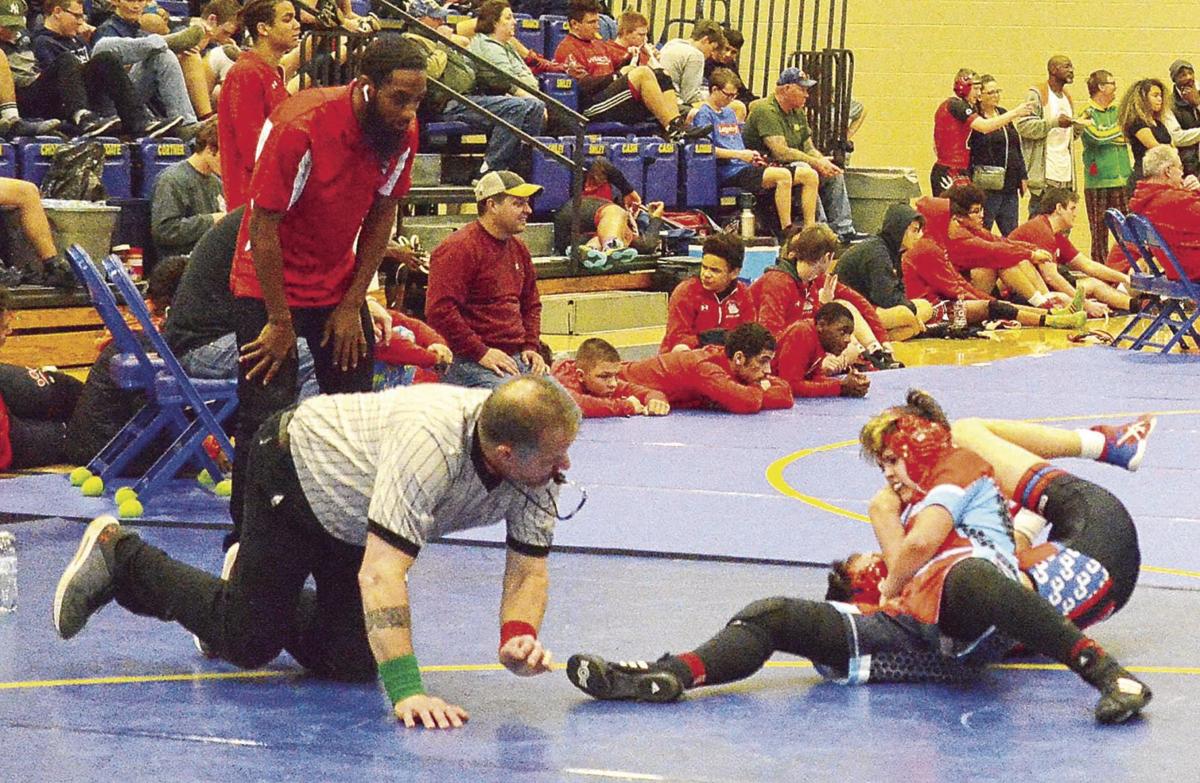 Junior Caitlyn Powers puts her opponent in a match-ending headlock at a tournament hosted by Caldwell County earlier this season.

Powers’ arm is raised in victory after she secured the pin.

Junior Caitlyn Powers puts her opponent in a match-ending headlock at a tournament hosted by Caldwell County earlier this season.

MURRAY — Four years ago, Caitlyn Powers was in Sikeston, Missouri. She was on the wrestling mat getting her head slammed repeatedly into the mat by a male opponent who seemed to have something to prove. After being head-butted one too many times, Powers took action. Her opponent found himself running to the referee exclaiming that he had tooth marks on his forearm.

Now, if you ask Powers, she’ll tell you that she didn’t bite him.

“He put his arm in my mouth,” she insisted.

Unfortunately, the referee didn’t buy that. Powers was disqualified from not only the match but also from the remainder of the tournament. That day, Powers proved that she has what it takes to be a wrestler: she wasn’t going to be pushed around.

Since then, the young athlete has proven herself time and time again. Most recently, she placed first at a girls’ tournament in Fort Campbell where she went 4-0 on the day with four pins, and defeated Tennessee’s fifth-ranked female wrestler.

McWherter and Powers both said it bluntly: Powers was not very good her first year.

As an eighth grader, Powers came out to wrestling practice and asked McWherter if she could be on the team.

That set the hook in even deeper for Powers who is extremely competitive by nature.

“My first season, it was tough,” she said. “I didn’t really know what I was doing. I was so new to the sport and the technique. Now, I feel like I’m better because I’ve got the knowledge, and I’ve gotten stronger than I was back when I started.”

“She got a little more technique underneath her, and her strength came,” McWherter said. “This year, it’s the same thing. Her feet are moving. She’s a lot stronger, and she’s a lot more disciplined. You can see it in her weigh-ins.”

Since she began wrestling, Powers has been struggling to make the cut to 126, and, now as a junior, she is on track to do so.

“She’s following a decent plan to get down to where she wants to go for the state tournament, and she’s executing high-level moves that you don’t run as a freshman or a sophomore,” McWherter said. “She’s doing some really high-level stuff on her feet on the mat. She’s getting better every year, and I’m excited to see where this year goes, and next year being her senior year, to see where we end up there.”

Powers has already made a name for herself nationally and state-wide. Two summers ago, the head coach at the University of the Cumberlands contacted Powers and asked her to wrestle on the first ever Kentucky Female National Team. At the national tournament in Tulsa, Oklahoma, Powers made history by pinning an opponent from Kansas and was even offered a scholarship.

At the first ever Kentucky female state wrestling tournament last year, Powers placed fifth. Her finish left a little bit of a bitter taste in her mouth, as she was one place away from medaling.

“I didn’t do as well as I had hoped,” Powers said. “This year, I’m working a lot harder than I did last year, and I’m taking it way more seriously. I hope to medal.”

Powers’ biggest blockade in wrestling is her gender. She said that the guys are just naturally stronger.

“Right now, in Kentucky, wrestling is not officially gender split yet,” Powers said. “You have to stay in the mindset that you’re going to be stuck wrestling guys most of the time. You can’t give up. You have to show them that you mean business.”

Besides being a female, her height has provided some limitations.

“She knows the moves, but she kind of gets locked up every now and then,” McWherter said. “She has to think her way through them instead of just letting things happen and just doing them. When you have to pause and think during the middle of a match, your opponent has the time to counter and react to that and you get yourself in a bad spot. That’s something that we’re working through.

Thankfully, Powers has a whole support system behind her that is cheering her on from the sidelines. After she was disqualified in Sikeston, Powers’ teammates didn’t take their frustrations out on her.

“Our team’s reaction was to thoroughly pummel the rest of their team the rest of the match,” McWherter said. “The guys kind of rallied behind her and stood behind her and stood up for their teammate, which showed me that she’s a wrestler. Boy, girl, whatever, she’s a wrestler. Since that time, we’ve had three other girls come out and wrestle on the high school team and then we’ve had a lot of girls come up through the youth program, and we don’t see them any differently than them just being wrestlers. It was a chance for me to see how the guys reacted to it, and they did a good job. She was just another teammate.”

But Powers pointed out that she has other sources of support as well.

“There’s a lot of support with other coaches that have female wrestlers on their teams,” Powers said. “In matches that I’ve won against guys, I’ve had my opponents’ coaches telling me that I’ve wrestled good matches. There are parents that tell me, ‘Oh, that’s cool that you’re doing this.’ It’s not just my parents or my coaches that are out there supporting me.”

Powers’ end-goal for the season is to place at the girls’ state tournament, and McWherter thinks she can get there.

Powers has come a long way from her first major tournament when she was disqualified. She’s bettered her stamina, strength, technique – and, perhaps most importantly – she now wears a mouth guard to prohibit her from taking a chunk out of another opponent.